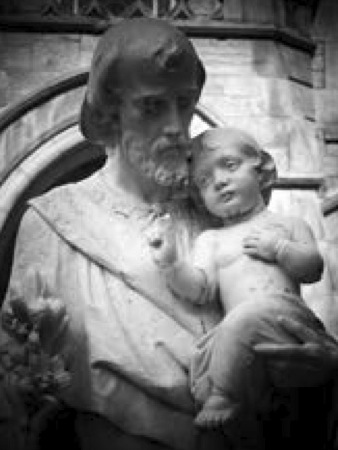 The strong and silent saint from the Gospel, is a fitting one for our troubled times: The husband of the Virgin Mary, and foster father (protector) of the Christ, was proclaimed the patron of this country at its very origins, by none other than Samuel de Champlain, on March 19, 1624, a choice later ratified in a more Magisterial manner by Pope Urban VIII, the same one who would authorize the Jesuits in their mission to Canada (Jean de Brebeuf arrived here the following year, in 1625), and the same Pope who would be embroiled less than a decade later, sadly, in an historically significant tiff with his former friend and confidant, Galileo.

Canada has gone through many trials of late, and seems to heading for many more, under the ideological increasingly-dictatorial regime of Justin Trudeau, whose Catholic credentials leave much to be desired. He is a graduate of a high school named after Brebeuf, but has not exactly followed in the great martyr’s noble footsteps. Rather, he – and many others -have seemed bent on undoing the Faith the blood of the martyrs sowed, or what little of it there is left.

Now, with the stalking of the insidious Covid-19, we seem to be reaping what we have sown.

Yet it is ultimately God Who is in charge, and He needs but a ‘little’ to do quite a bit. As Scripture signifies, He is wont to exercise that power in a way hidden from the world’s notion, through those to whom He gives some share in His authority, not least Saint Joseph, to whom, like the eponymous patriarch in Egypt, God has made ‘master of His possessions’. Like any good servant, Joseph did what he was asked to do, even if it made little sense to him at the time, with courage and determination. When asked to take Mary as his wife, his betrothed who was with child – I should say, Child – by mysterious means, he did as the angel asked. As today’s readings signify, Joseph was a just man who lived by faith.

And just as God willed that the strong and capable Joseph guide the Holy Family through travails large and small, Saint Joseph will see us through, one way or the other, even, and especially, when things make little sense to us.  Viruses, scandals, erroneous teaching, incipient schisms, and malfeasance are rocking the Church, threatening to tear her asunder, but God sees all, from the least to the greatest, and in the end, He will laugh all the apparently powerful to derision, when in the end He makes all manner of things well.

This is a day of obligation in the universal Church. Or perhaps was, with the proscription of public Masses across our land. Long before the virus scare, the bishops of Canada abrogate this requirement, perhaps realizing that few will attend Mass, even if ‘obliged’. Perhaps they will re-think things, if things ever return to normal.

But let us, as we are able, be amongst those who ite ad Joseph, who go to Joseph, in some way or another, in prayer, in supplication, and may the mighty saint intercede for us, our families, our schools, our Church, our Dominion of Canada, and for the world.