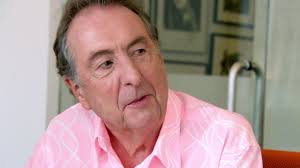 Eric Idle, of Monty Python comedy troupe fame, has recently tweeted that ‘climate change deniers’ (one of the few groups remaining,  in this Disney-esque world-of-universal tolerance, upon which opprobrium can be piled without guilt) should be punished in an international court, and that such nefarious and recalcitrant malfeasants be ‘put down gently’; one may suppose he means in the euthanistic sense.

Mr. Idle, as those of a certain age or milieu may recall, is the same individual who played in the sacrilegious ‘Life of Brian’, which was more or less an hour and a half mockery of the life of Christ.  Amongst the quotable gems of Idle’s is that he believes ‘in the separation of Church and planet’.

Like the portrait of his fellow fictional countryman Dorian Gray, Mr. Idle has not aged well, and his latent anger signifies a malady often afflicting comedians. Of course, I cannot judge the interiority of his soul, and his appearance is secondary to his opinions, but I cannot help but ponder one commentator’s reminder of the also-British, but much more insightful, George Orwell’s comment that everyone has the face he deserves at fifty.  Now, to be fair, Eric is 73, but I suppose the argument holds for septuagenarians also.  I would rebut Mr. Orwell, and say that, if nothing else, one rather has the soul he deserves by the time middle age hits.  Eric Idle made quite a substantial living making fun of sacred things such as sex and religion, but his humour has now turned all-too-sour as he advocates a final solution for those who happen to disagree with him.

Of course, as I have argued before, no one is non-religious, and to paraphrase a quip of Chesterton’s, if a man stops believing in God, he will believe in anything.  Climate change zealots are indeed a rather religious lot.  Of course, ‘climate change’ itself is unprovable and unfalsifiable, for the climate is always changing.  It’s what climate does.  And when you can’t prove your theory, you enforce it by ‘faith’ and ‘consensus’, and, finally, for the recalcitrant, by coercion, even with the threat of a gentle but certain death, just like religion in the good old mediaeval times.  Environmentalism takes on day by day the aspects of a whole new religion, with its own orthodoxy and high priesthood, and it does not seem to tolerate heretics all that kindly, if Mr. Idle is any indication.

Well, so much for the Pythonic laughs, which always hid a kind of cruelty and disdain for all that is truly sacred.

Be assured of my prayers, for one, Mr. Idle.