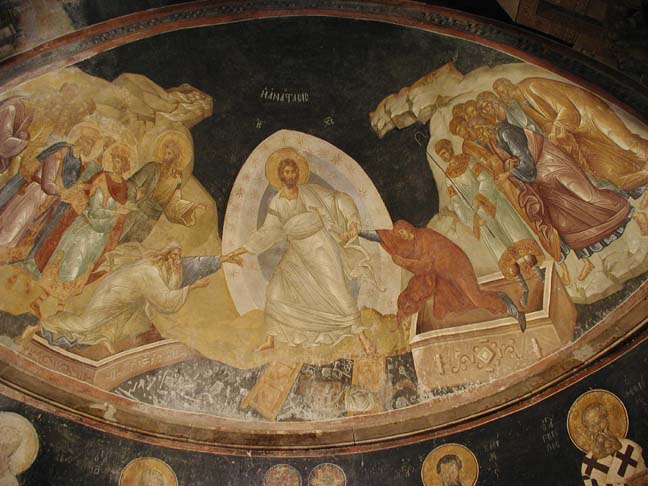 (As we begin these latter days of Advent, awaiting the imminent arrival of our Saviour, it would do us well to ponder what indeed He is saving us from.  Hence, this piece by Father Callam is quite a propos, that the Child in the manger is also the Redeemer of all men, the vanquisher of Satan, who was destined to carry in His own body and soul the sins of all time, and all of their heinous effects, in this world and the next.  So hope, the virtue especially dear in this Advent season, springs eternal.  Editor)

“He descended into Hell”

In the first place, we have a text from first Peter in the new English version of the Mass, a striking phrase occurs in the Apostles’ Creed, which in Canada is said almost every Sunday. Over the last few decades, we have been saying, “Jesus Christ . . .  suffered under Pontius Pilate, was crucified, died and was buried. He descended to the dead. On the third day he rose again. . . .” Now we are instructed to say, “He descended into Hell,” which represents a return to the traditional wording.[1] Why “Hell” was changed into “the dead” at all is an interesting question. It seems to have been the product of a policy on the part of the translators of a preceding generation to shield the faithful from anything that would shock us or even make us think. The result was a tepidity in the texts that made them the liturgical equivalent of the muzak you hear on elevators or in a doctor’s office. Our forbears in the faith were, it seems, made of sterner stuff. In fact, there are good reasons for restoring the original vigorous wording.

For Christ also died for sins once for all, the righteous for the unrighteous, that he might bring us to God, being put to death in the flesh but made alive in the spirit; in which he went and preached to the spirits in prison, who formerly did not obey, when God’s patience waited in the days of Noah, during the building of the ark, in which a few, that is, eight persons, were saved through water.  (1 Peter 3.18-20)

This strange text, whatever conclusions scholars may eventually come to about it, clearly indicates one thing, namely, that Christ’s triumph over sin and death was universally recognized, in every spiritual realm. In the traditional harrowing of Hell, especially popular in the art of the Middle Ages, Jesus is portrayed as exhibiting his power “in the spirit” by releasing the souls of the just who could not enter heaven until Christ had completely his great work of salvation. He once and for all overcame the power of Satan.

While in common speech, the word “Hell” is usually restricted to the abode of the damned, with Satan and the fallen angels, it is also used as a general term for the realm of the dead, like the “Hades” of Greek mythology. Nevertheless, something has been gained by restoring “Hell” to the creed in that it draws vivid attention to the universality of Christ’s redemptive work.” The art of the Greek Church illustrates in a striking manner that all men are given the invitation to eternal life through Jesus Christ. Consider the magnificent fresco in the Church of Chora (now the Kariye Museum) in Instanbul:

We see Christ portrayed as rising . . . no, springing up from the dead, as vigorous as an athlete completing the course. The aged couple he is pulling out of their coffins are Adam and Eve whose sin in the Garden of Eden resulted in all mankind’s being alienated from God in the first place. The universal restoration to God’s good favour is thus brilliantly depicted in the icon by having the progenitors of the human race sharing in the triumph of Jesus over sin and death: “Where sin increased, grace abounded all the more.”[2] The fact that not everyone is actually saved, despite the fact that “God desires all men to be saved,”[3] is owing to the exercise of free will. Only those who consciously turn against God are lost. The gates of Hell are locked on the inside.

Glimpsed at the bottom of the icon, at the feet of Jesus, is Satan, “the prince of this world,”[4] bound and helpless. He has lost his power, as we see from the gates of Hell smashed open with bolts and locks, keys and hinges, chains and fetters, careening around the prostrate figure. It follows that it is significant that Christ has visited Hell, rather that some shadowy, indeterminate region of the dead.

There is another element to be considered. The Swiss theologian Hans Urs von Balthasar (1905-88) commented on the descent into hell in light of the hellish conditions of the concentration camps of the twentieth century. Surely, someone might say, Christ’s agony, excruciating as it was, would not have been as great the suffering experienced in the Nazi camps or the Soviet gulag. Alexander Solzhenitsyn’s The Gulag Archipelago, or Martin Amis’s Koba the Dread,[5] presents a terrifying account of what it was like to fall victim to the brutal whims of Stalin. Equally appalling are the countless descriptions of the Poles and Jews who fell victim to the insane racism of Hitler.

von Balthasar, interpreted Christ’s cry from the cross, “My God, my God, why have you forsaken me?”[6] as implying that Jesus then experienced the absence of his Father, of God, which is the very definition of Hell. At this moment, von Balthasar would say, Jesus “descended into Hell” by experiencing the greatest torment of Hell: the absence of God. In Chesterton’s striking phrase, “[Christ] passed in some superhuman manner through our human horror of pessimism.”[7] And as the union of the man Jesus, the eternal Word made flesh, with the Father was of a surpassing intimacy, the anguish of separation would have been tremendously increased. His absolute innocence means that his “becoming sin”[8] for us would have had none of the mitigating effect that our imperfections bring to our evil actions. That is to say that even the victims of the gulag and the camps cannot say to Christ that he did not know the extremes of human suffering. He knew them all—physical, psychological, spiritual—and to such an extent that he visited the very confines of Hell where his fidelity and love for his Father, confirmed by the resurrection, demonstrate the presence of God’s love even among the damned souls of Hell. Only those who choose to separate themselves definitively from God are fettererd there.

[7] G.K. Chesterton, Orthodoxy, Collected Works, vol. 1 (San Francisco: Ignatius Press,1986), p. 343. Chesterton continues: “When the world shook and the sun was wiped out of heaven, it was not at the crucifixion, but at the cry from the cross: the cry which confessed that God was forsaken of God. And now let the revolutionists choose a creed from all the creeds and a god from all the gods of the world, carefully weighing all the gods of inevitable recurrence and of unalterable power. They will not find another god who has himself been in revolt. Nay, (the matter grows too difficult for human speech,) but let the atheists themselves choose a god. They will find only one divinity who ever uttered their isolation; only one religion in which God seemed for an instant to be an atheist.”