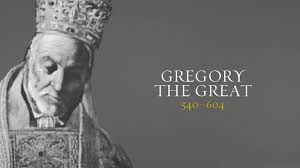 One of the great joys of history is reminiscing about the past, giving hope for the present; for history is ‘eschatological’, moving towards a final purpose. Hence, we Catholics should never lose hope, and this virtue is easier to cultivate and foster in our souls if, as Christ said, we could but read the signs.

Saint Gregory, pope from 590 to 604 A.D. was one of such hopeful figures in our panoply of saints, who indeed changed history. Raised in an aristocratic and wealthy family, the son of a Roman senator (even if that office had declined somewhat from Rome’s glory days), who himself rose to the heights of administrative office, being appointed prefect of the city at the age of 30, soon after which he decided to dedicate his significant talents, along with his resources, to the service of God. Founding a Benedictine monastery on his family’s property on the Coelian hill, he lived in prayer and silence until, in that fateful year of 590, he was elected supreme pontiff on this September the third.

Gregory, like all saints, was industrious, using the time he had well: He shored up not only the Church, but Rome as well, governing the city far more efficiently than his secular predecessors had done (and thus involving future Popes in temporal governance, which would create many issues in the centuries to come, especially for those of lesser character and virtue than Gregory). He won the undying admiration and devotion of the people by his wise governance, saving them from famine, like Joseph of old, ensuring especially the most indigent were fed. It is said that he would not sit down to eat until all the poor had had their fill, and even then he would gather twelve of them around his own table – which table still exists as a relic of his charity. He was known for his unbending conscience – which inspired others. One of his many saying s – a propos for our day – is that the universe is not rich enough to buy the vote of an honest man, which should put paid to the silly maxim that ‘it’s the economy, stupid’. No, it’s the moral law, without which we have no economy to speak of, as Gregory saw, and proved right by his work.

He also organized the mission to the Anglo-Saxons, sending Augustine (yes, the ‘other’ Augustine, who was prior in Gregory’s own monastery) to Canterbury, which foundation became the locus in the conversion of Britain to Catholicism, along with the barbarians in and beyond the Italian peninsula, Franks, the Lombards, the Visigoths, who had until that point been immersed in the pernicious heresy of Arianism. Thus, he saved most of Europe, making the continent, from France to Germany, Catholic – at least up until the machinations of Luther, Calvin and the Protestant revolt.

Gregory is also known for his liturgical work, revising and ordering the Mass and the other sacraments according to norms binding upon the whole Church; he also organized the ancient liturgical chants, which preceded him, but which now go by his name, and now far too neglected (and we should not underestimate what good would come from singing chant again at Mass, as the Church has taught in any number of her documents)

The great Pope also wrote many profound works, not least his Dialogues (including an invaluable near-contemporaneous life of Saint Benedict), his Pastoral Rule, his Commentary on Job, and numerous homilies and letters, for which he has been given the title of Doctor. More on his life can be read in the accompanying post from his successor, Pope Benedict.

How might one rate such a man, sent by God at those rare moments of history, when otherwise we might have slid into the abyss? A model for Popes through the ages, and we should be grateful indeed for the numerous saintly men who have graced the office of Peter, a burden so great that one needs sanctity, and a whole lot of grace, to carry it.

Hence, pray for the current Holy Father: May that same light of truth shine through the present darkness in the Church, for, regardless of travails, God will never abandon His bride.