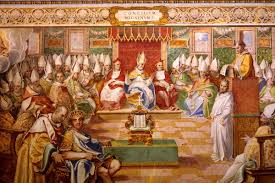 There are times when one word, even one letter, can make all the difference.  The scene is June of 325, in the basilica of the imperial city of Nicaea (now in northwestern Turkey) where an ecumenical council has been called by the Emperor Constantine to deal with a number of issues in the Church, not least the ideas of a certain learned and charismatic deacon from Alexandria on the Egyptian coast (then under the control of the empire), Arius, who claimed that Jesus the Christ was not fully and completely ‘God’, at least not in the sense that God the Father was God.

The Second Person, rather, was an emanation from the Father, exalted and ‘divine’ in a sense, but still, technically, a ‘creature’, who came into existence at a certain point.  As the followers of Arius would say, ‘there was a time when He was not’.

Many were convinced by the subtle argument of Arius, that Christ and the Father could not be the ‘same’, for are they not somehow different?  Otherwise, is not the Trinity something of an illusion, just three ways or modes of God presenting Himself to mankind, as the Roman priest Sabellius had claimed a century or so earlier?

The Council was called to settle the question, and the argument became heated, as the pro-Arian bishops fought, sometimes literally with the anti-Arian faction (there is a rumour that Nicholas of Cusa, the prototype of Santa Claus, descended to the ad baculum argument, pulling the beard of the annoying Arius).

The orthodox position, of course as we now know and believe, is that Christ is the ‘same’ as the Father, fully divine, fully God: ‘I and the Father are one’, and ‘He who has seen Me has seen the Father’.

The term that captured and solidified this position was adopted from ancient and pagan Greek philosophy, ‘homo-ousios’, that Christ was and is the ‘same-being’ or ‘same-substance’ as the Father.  And the great champion of the homo-ousios was the saint we celebrate today, the holy and learned Athanasius of Alexandria (296-373), bishop of the very same city as the recalcitrant Arius.

There is too much to tell of the varied and adventurous life of the great Athanasius (I would recommend the reader to peruse the essays of Bd. John Henry Newman, a great devotee of Athanasius). Suffice to say that Athanasius suffered much for the faith, exiles and imprisonments, fleeing often as a fugitive from his own episcopal see, especially under Constantine’s sons and successors, who adopted Arianism with a vengeance.

But to end for now where we began, with the term and the letter:  A compromise was attempted, that instead of homo-ousios, could we not all agree on homoi-ousios, that the Son is ‘like’ the Father, but not quite the ‘same’?

Athanasius’ clear mind, sharpened and developed through a life of prayer study, discipline and chastity, knew that this would be the death knell of Catholicism.  For are we not all ‘like’ God in some way?  Is not the Son unique, in being not only similar to God, but very God Himself, in a way that transcends our limited human minds to fully comprehend?

Thus, for the sake of one ‘iota’, the smallest of Greek letters, our faith was saved, largely due to the efforts of one great and holy bishop, who stood, often alone, against the forces of waffling, ambiguity and ultimate heterodoxy, with the whole might of the imperial army behind them.  He was known as Athanasius contra mundum, Athanasius against the world, a term that should in some way apply to us all. After his death in 373, the Cappadocian doctor of the Church Gregory of Naziansus called Athanasius the ‘pillar of the Church’.

The truth always wins out in the end, even if it costs.  And what is worth winning, without some sacrifice?

Ponder Athanasius the next time you recite the Creed that was adopted at that Council of Nicaea, meditating on the unambiguous description of Jesus the Christ as:

God from God, Light from Light, true God from true God, begotten not made, consubstantial (homo-ousios) with the Father…