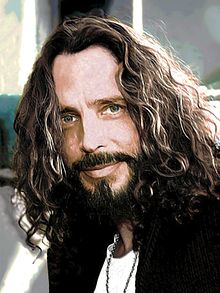 Chris Cornell, the frontman of the Seattle grunge rock bands Soundgarden and Audioslave was declared dead on May 18.  According to later developments throughout May 18th, further information revealed that the cause of death was suicide by hanging. His suicide was not only shocking to his fans but even his wife, Vicky, who allegedly stated that Chris had not demonstrated any signs of depression prior to his final concert in Detroit on May 17 with Soundgarden.

Chris was one of my favourite singers growing up.  Over the years, I found myself appreciating his work more and more, including his collaboration with some of the band members of Rage Against the Machine which resulted in the formation of Audioslave.  His music as a solo artist further exemplified his creativity as a gifted song-writer. He had an impressive four octave vocal range combined with a unique talent for authoring poignant lyrics and thoughtfully composed music.  Aside from the countless songs he wrote for Soundgarden, he was able to showcase a remarkable variety of other songs including ones like “Can’t Change Me”, “Like a Stone” and the beautiful acoustic ballad “Sunshower” for the Great Expectations soundtrack.  In recent years, he recorded an exceptional interpretation of Michael Jackson’s “Billie Jean.”  He also performed a beautiful rendition of “Ave Maria” which displays his extraordinary vocal range.  One could go on and on about his musical achievements but this is not why I am writing today.

Initially, when I thought of writing a piece on Chris, I considered focusing on the notion that we never know when we will die and that we must cherish every moment by giving God thanks for the gift of life.  However, further developments could not permit me to continue with this line of thought.  Suicide is a difficult subject to broach but I cannot conclude that he was merely determined by his genetics and environment to execute such an act, although even further developments suggest the usage of Ativan for relieving anxiety, may have impaired his judgement. But is that a sufficient explanation?  Some are speculating that Soundgarden’s cover of Led Zeppelin’s song “In My Time of Dying,” which was their last song of the set, was Chris’ goodbye to the world.  Something tells me he was very cognizant of what was to transpire next.

Depression and mental illness are very difficult subjects to tackle but I am persuaded that there are always ways out of certain predicaments, that is, if one wants a way out.  I am neither a hard nor soft determinist (compatibilist); I really do believe we are morally responsible for our actions which, in my estimation, makes us either praiseworthy and blameworthy; neither neuroscience nor physics preclude this.  I think we have good philosophical and theological reasons to affirm genuine free will.  After all, why would we praise Cornell’s musical abilities if it were not him who freely and creatively composed and performed such wonderful music? Are we to praise matter in motion, i.e., the unintended firing of neurons to produce something that utterly transcends physics? The informational content of music, neither the subjective experience of it, can be reduced to just the mere sounds produced by the instruments or vocal chords. We can also ask, why we would condemn serial murderers and child rapists if we are wholly determined by genetic makeup and environmental factors? It is quite simple, if no one has any moral responsibility then we do not have the right to praise or blame anyone.  Throughout our lives we cultivate virtues and vices. We do not become the persons we are just overnight.  In a world without God, the after-life and free will, things just are, whether we like them or not, as Richard Dawkins has observed, that such an understanding of the universe is filled with “nothing but blind pitiless indifference.”

The whole situation saddens me for his children, wife, family, friends, and fans. As a huge fan, I am also saddened, but more so, in a selfish way since I would have loved to hear more recordings and additional live performances. However, more importantly, as a follower of Christ it saddens me to think, that his despair, depression and/or confusion or whatever it was that led him to this path of irreparable damage. Apparently Chris became part of the body of Christ through his conversion to Greek Orthodoxy, but one never truly knows the heart or mind of another person. Let us hope that there was a genuine moment of repentance before it was too late, just as we cannot know the internal thoughts of any individual. Let us also hope that in those final moments, Chris reached out to the Redeemer of all, instead of “the gods and the angels, like a pagan [or] to anyone who will take [him] to heaven.”

There is this indubitable and inescapable arcane feeling of pathos in each and every one of us, whether we acknowledge it or not. Some of us attempt to suffocate it with alcohol, drugs, sex, and countless other distractions that become false idols. False idols are worshipped whenever we put any created thing above God.  However, this struggle that is manifested through various different ills can only ever be overcome by the Source of all, the ultimate uncreated reality, which is God. This is why St. Augustine observed that, “our hearts are restless, until they rest in [God].” Perhaps Chris had a similar realization when he wrote in his cryptic song “Like a Stone”: “in your house I long to be, room by room patiently, I’ll wait for you there, like a stone, I’ll wait for you there, alone…”

Unfortunately, most humans in such a plight will continue on their path of self-destruction, and can only stop through acknowledgement of our predicament and its only true remedy.  Personal-autonomy and reliance on created things has never been, nor can ever be, the answer.  True hope is found in everlasting life, through Christ’s ultimate redemptive act. We must put our trust in Him and nothing else.

Instead of his final decision, I wish that Chris would have “tried to live” that day.

Scott Ventureyra completed his Ph.D. in theology at Dominican University College in Ottawa, Canada. His thesis focused on the origin of consciousness as it pertains to the science-theology interaction.  He has published in academic journals such as Science et Esprit, The American Journal of Biblical Theology, Studies in Religion and Maritain Studies. He has also written for magazines such as Crisis and Convivium and newspapers such as The National Post, City Light News, The Ottawa Citizen and The Times Colonist. He has presented his research at a number of conferences around North America including at the Science of Consciousness in Tucson, Arizona in 2016.