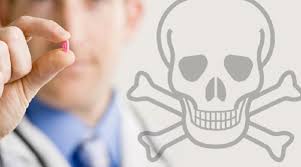 Yes, a cheery title for an article, but we are in a serious business, for unless the Supreme Court decides otherwise, Parliament must come up with a law for ‘physician-assisted suicide’ by this February.  The government has petitioned the Court for a six month extension, but one way or the other, a law is coming down the pipe, it seems.  Unlike the ‘question’ of abortion, about which there are no federal or provincial laws, even the morally-deficient legislators running our country realize that euthanasia cannot be left so ungoverned, for the unchained beast which kills adults (and not just children hidden in the womb) may quickly spiral out of control, and come after them.

They are wasting their time trying to frame a ‘containable’ law, for regardless of what kind of law is passed, there is no way to keep the evil genie of murder-suicide inside the proverbial bottle.  One need only peruse the morbidly fascinating Federal Panel Recommendation for crafting the proposed law.  Much is left secret, but what has been made public is enough to raise the hairs on the back of one’s vulernable neck.  Scroll down a few pages on the link, and you will discover these tantalizing tidbits from the dark lords of death Parliament has chosen to advise them:

The Carter decision applies to a “competent adult person,” but does not include a definition of adult. In assessing whether someone is an adult person, an arbitrary age limit such as 18 years old provides no valid safeguard. Instead, it is important that willing physicians carefully consider the context of each request to determine whether the person has the information needed, is not under coercion or undue pressure, and is competent to make such a decision.

In other words, children should be permitted to request suicide, and be murdered, presumably, as is already the case with 13 year olds requesting abortion, without parental consent.  I agree with the Panel that “an arbitrary age limit such as 18 years old provides no valid safeguard”, but because there are no valid safeguards for murder-suicide.

And why stop at 12 year olds, as the Panel elsewhere recommends?  Once the door to euthanasia is opened, and is seen as a valid medical and moral option, why deny such an ‘end to suffering’ to even younger children, with parental and physician consent, of course. Who are we to stand by and watch them suffer, just because they cannot speak?

The wide pathway being opened to death becomes clearer in the next excerpt, and read through this carefully, for it is telling:

The second aspect of eligibility requires that the physician confirm that the patient is suffering from a grievous and irremediable medical condition. The Supreme Court does not offer a definition of “grievous” in the Carter decision. The Canadian Oxford Dictionary defines “grievous” as “very severe or serious.” This definition should be used in any changes proposed to the Criminal Code, provincial/territorial legislation or regulatory authority standards related to physician-assisted dying. Consistent with the Carter decision, we understand that “irremediable” is used to describe a condition that cannot be alleviated by any means acceptable to the patient. The determination of whether a condition is irremediable should be a two-step process. First, the physician must determine whether any treatments exist for the condition. Second, the patient must determine whether any of the available treatments are acceptable to him or her. We heard consistently through the stakeholder engagement process that grievous and irremediable should not be defined in terms of specific health conditions. No list of specific conditions could capture the range of illnesses, diseases and disabilities that might meet the parameters established by the Supreme Court. Instead, we recommend that regulatory authorities develop tools to assist physicians in making this determination on a case by case basis.

Behold, dear reader, the presumably expert and highly-compensated members of the Panel are using the Oxford dictionary to describe a ‘grievous’ condition, which, after all the legalistic blather, is in the end left medically undefined, without any objective criteria.  Whatever a patient deems grievous is, well, grievous.  Even if a treatment exists for the patient’s condition (and treatments always exist, at least palliative for end-of-life care), the patient is free to reject such treatments on purely subjective grounds “because they are not acceptable to him”.  In fact, as the Panel suggests, “no list of specific conditions” can capture what might be fit grounds for murder-suicide. Paralysis?  Parkinson’s? Mild to serious depression? Lupus? Bad acne?  A romantic breakup?  Low self-esteem?  Extreme poverty? Life regrets?  Old age?

Think me unduly pessimistic?  Glance back at the last sentence of Recommendation 17, that the physician must ensure that the patient is not under “undue pressure” to have himself passively murdered.  Pressure is fine, urging old grandpa to go gently into that long goodnight and save some of the inheritance draining away keeping his sad carcass alive in the nursing home, so long as we do not cross some kind of line, but that line, like the criteria, is also left undefined.  As soon as someone perceives himself unwanted, unloved, a medical burden, they will most certainly feel some kind of ‘pressure’ to kiss the world farewell.

We would do well to hearken the words of the great Pope Saint John Paul II, who declared in no uncertain terms in Evangelium Vitae:

in harmony with the Magisterium of my Predecessors and in communion with the Bishops of the Catholic Church, I confirm that euthanasia is a grave violation of the law of God, since it is the deliberate and morally unacceptable killing of a human person. This doctrine is based upon the natural law and upon the written word of God, is transmitted by the Church’s Tradition and taught by the ordinary and universal Magisterium.   Depending on the circumstances, this practice involves the malice proper to suicide or murder.

Euthanasia, whether it entail murder, suicide or both, is an intrinsically grave evil, and must be stopped at all costs, as it will only usher in a true dark age here in Canada under our ‘sunny ways’ Prime Minister, who is completing the work his father began, in what seems like some sort of bizarre Faustian bargain.

Then again, Faust was given a chance to repent, and the same choice stands before Mr. Trudeau and his legislators, but, although I am holding my faith, I am not holding my breath.  The Supreme Court decision in favour of assisted suicide last February, 2015 was unanimous, 9-0, and, barring a miracle, a subsequent law seems inevitable.

The macabre recommendations of the Panel, should they be adopted, will only accelerate the process towards the widespread extermination of the undesirable, young and old.  If Canadians accept this law, our physicians and nurses comply in being turned into murderers, and our hospitals double as charnel houses, then we are all done for.  The only recommendation Parliament and the Canadian people should adopt is to tell the Supreme Court, nine unelected officials by the way, where to go.

One way you can do that is to go to the this site, where you can offer your own two cents worth of advice to the government, which is seeking consultation from ‘the people’, as well from ‘expert’ panels.  I wonder how much of this is window dressing, to mollify an unsuspecting and gullible populace, but it never hurts in cases like this to have your voice heard, even if it is a voice crying the wilderness.