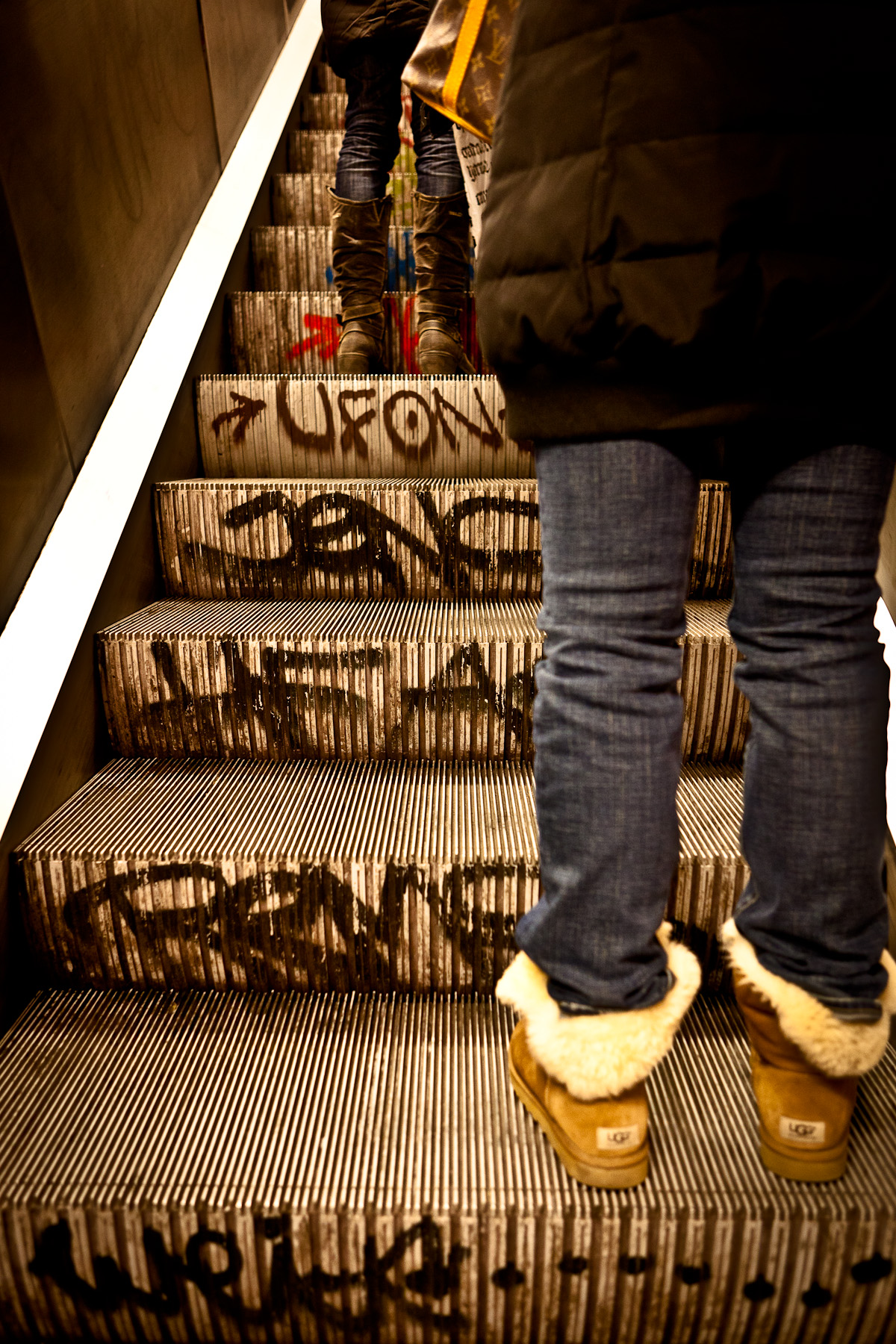 When I was little, I was dreadfully afraid of escalators. I thought the little metal teeth at the end of each step would snag my toes and somehow drag me through the cracks between the steps and I would disappear forever and bleed to death (via my mauled toes) in some deep, dark, underground land.

An overactive imagination has mainly caused lots of trouble in my life.

My fear wasn’t helped by the fact that, to an adult, my refusal to accompany them on an escalator seemed highly irrational. I was always being told to “Get on NOW. THERE ARE PEOPLE BEHIND US!” Oh, the dreadful pressure.

Any situation involving me, an escalator, and an adult in a rush always ended up in puddles of tears.

In order to actually get over my fear, I had to just start closing my eyes and jumping on. Kind of like when I was first learning how to drive, and I was really afraid of backing up. I could never tell if someone was coming or not, so I would just close my eyes and go for it.

I am pretty sure my guardian angel worked overtime on that one, and I hope my parents never find out. It’s an undeniable miracle that I never totaled one of their cars or ran someone over.

Since escalator usage actually involves a little bit of forethought and co-ordination, and—until recently—I just jumped on and hoped for the best, I still had a problem. Only it involved tipping onto people who were either ahead of me or behind me (depending on whether the escalator was going up or down).

Life lesson: if you close your eyes and jump onto an escalator and land on the crack, when it separates into a step, half of your foot is left unsupported. This leads to bodily collisions with strangers.

Unfortunately for those around me, I now live in London where the Tube is a necessary evil, and involves many, many escalators. On top of that, when anything awkward happens the British turn a blind eye and ignore it, point blank. It’s weird enough to fall into someone on the escalator when everyone else seems to be handling it just fine. But it gets weirder when you fall into someone, apologize profusely, and get a blank stare in return.

It kind of makes you feel like you are hallucinating your own awkwardness.

A few weeks ago, after yet another dastardly struggle with moving staircases, I decided that I really did need to stop being so dysfunctional.

So I actually thought through my escalator habits. I decided that my foot needed to be firmly planted on the actual step, and not on the crack between steps. Stability and a solid foundation, it seemed, were key. Therefore, closing my eyes, jumping on, and hoping for the best were destined for failure approximately fifty percent of the time.

Well, I am happy to report that keen analytical skills and wise problem solving techniques have successfully solved my problem.

Yay me, but I definitely feel like it should have taken less than twenty-six years.

But maybe that’s just part of human nature, or, at least, mine. As with escalators, I tend to make the same dumb mistakes ad nauseum until some grand cataclysm convinces me that the current modus operandi is just really not working.

My growing-up process seems to involve situations similar to my slapping my hand on a hot burner until it occurs to me that I don’t need to inoculate myself against the burning pain, I just need to stop putting my hand on the hot burner.

We so easily fall into ways of being and doing, which then form quickly into unconscious habits. And even if those habits really, really hurt us it might seem as if there is no other way of coping with them, so ingrained are they. Sometimes we might not even really realize there is a problem—there is just a vague acceptance of burned hands or falling down escalators.

To retrain one way in which you relate to the world around you is tantamount to telling yourself to breathe through your fingertips instead of your nose. Nose breathing is how it’s ALWAYS been done. How does fingertip breathing even work? You mean I have to CHANGE? The mind blows up in disbelief.

The thing is, you can’t un-see something once you see it, no matter how much you didn’t want to see it in the first place. And once you have seen, you have a choice: stop stepping on the cracks and being a klutz, or keep stepping on the cracks knowing that this is the cause of your unwelcome bodily contact with total strangers and you are being a moron for not doing anything about it.

C. S. Lewis said something along the lines of pain being God’s megaphone to rouse a deaf world. As such, pain is completely undervalued. Even though the inclination is to run away from it as fast as we can and pretend it’s not there, pain is a valuable tool for our use. Pain of any sort—even if just mild uncomfortableness or popped pride or being given a blank stare on the escalators for the 105th time that day—is meant to be looked at squarely in the face; it is meant to stop us in our tracks so that we can become aware of something we have been too busy and stubborn and blind to acknowledge.

My recent successful endeavours with escalators have borne surprisingly rich fruit. Taking just a moment to name that problem and face it head on has reminded me that there are definitely much bigger things with which I need to stop closing my eyes and flooring the gas.