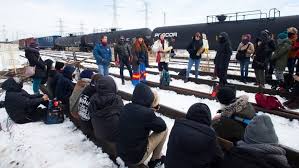 The pathetic summation of Marc Miller, Minister of Indigenous Services, says it all: The protests, clogging up the entire Canadian economy, or what’s left of it, should be allowed to continue, until a ‘peaceful resolution’ is achieved through ‘dialogue’. And for this sad squib, Prime Minister Trudeau cancelled his diplomatic trip to the Caribbean, rushing home to convene a meeting of his ‘elite’ cabinet members, the ‘special response unit’ – or whatever he calls it – whose competence seems about on par with the Keystone cops.

I am trying to remain philosophical about this, as a strive for most things, but the desire to personally drive a train or truck through the blockades – sparing any loss of life, of course – is a deep one.

So let us ponder said ‘dialogue’, a term which etymologically, dia-logos, implies ‘reasoned discourse’, an ordered give-and-take, with a known and knowable entity.

Readers know that I, and many others, take serious issue with the implied indigenous ‘ownership’ of large swathes of what is quaintly called ‘Canada’. Private property is a concept of considerable complexity, but, in sum, it implies that one has impressed one’s ‘personality’ on the land, developed its potential, made it bear fruit in some way. Just ‘being there first’ does not quite cut it. Because one’s ancestors hunted and fished in regions of what is now British Columbia or Ontario does not make it one’s personal extended family property in perpetuity.

If that were the case, I would have far more claim over swaths of Ireland, and at least my ancestors built houses, developed farms, with titles and deeds to specific quantities of land – almost all of which was taken away by British invaders, by means far more violent than anything done to the Indigenous in Canada.

Even if we admit indigenous ownership of some such property – for the sake of dialogue – to whom does it belong, and who has authority over what is done thereon, questions staring the Trudeau government square in the face? With whom is the government meant to dialogue?

I have written before that what makes one ‘indigenous’ is too vague and nebulous, with such ‘status’ – freedom from taxes, tuition and hunting laws just the beginning – a coveted thing. As far as I can tell, one must have one-eighth ‘native heritage’, with at least one grand-parent who is ‘full blood’. How is one to tell that, given said grand-parent may well be in his grand grave? And I would be grateful if someone could explain to me how this is not some sort of bizarre inverse racism. For why would anyone want to ‘dilute’ such blood beyond the magical number by marrying too often or too much outside the tribe?

The question is a fraught and current one, for the deal for the B.C. pipeline was made with the various band councils – sure enough, prey to their own venality and nepotism, but at least vested with some legal authority. Yet, now arises a new, higher voice, rising from the shadows, speaking for the indigenous, the ‘hereditary chiefs’ – dressed in fine robes bedecked with colours, donned with feathered headdress and wearing solemn frowns, bespeaking, one supposes, their noble lineage. Their word now seems to be law, ignoring any quasi-elected band council and whatever binding contracts they signed. Now who’s to say a deal made with them will be any more binding than a deal made with the band councils?

One would be tempted to laugh the whole thing off, were it not all so serious. So who now speaks for the indigenous, when they know not even their own authority, without which one cannot have law, nor even any semblance of law?

Without law, and the ‘reason’ upon which all law is – or should be – based, all we have left is violence, as Pope Benedict pointed out in his critique of the anti-rational tendencies within Islam.

Hence, the blockades, with the economy losing untold millions per day, and, soon, food and fuel shortages.

It is bad enough to have a nation within a nation, but to have one with little or no concept of its own authority, it hierarchical structure, its reason for being, its membership, is more or less tantamount to the chaos we see unfolding.

And the muddled millennials follow along, with a vague sense of righteous indignation, lacking in other far more serious and real causes.

At this point, it seems the only answer is the coercive aspect of law – that is, forcible removal of the blockades and protesters, hopefully without anyone getting harmed. Trudeau does not seem to have the stomach nor, more to the point, the intellectual resolve for this. In one of those recurring ironies of which life and history are filled, he has undone the protection of law and imposed violence on the most defenceless and least deserving – the unborn, the sick, the elderly, even, now the mentally ill – and is now loathe to apply the same law upon those who most deserve to be put in their place, but who – dare I say it – may fight back.

And now, just yesterday, Trudeau held a meeting with opposition leaders – excluding Andrew Scheer who, in Trudeau’s own stumbling words, had ‘dis-de-qualified himself’ with his ‘unhelpful comments’ earlier in the day, advocating an immediate end to the blockade.

In the words of the 80’s ballad, Trudeau’s true colours are shining through, which I suppose is a small blessing.

In the current milieu of vacillation, irresolution and even cowardice, it seems Canada will be held hostage to capricious and violent elements within her own society, a quality of third-rate banana republics, which is what we’re fast becoming. What reputable company will ever want to do business in such a capricious economic environment? Is it not one of the primary tasks of government to ensure stability and order, without which there can be no peace?

We need not a boy-man spouting evasions, and slogans of which he has little awareness, but a real leader, aware of the stakes at hand, of the true good of this nation, and willing to stare down, instead of away from, evil.

Alas, in the current state of things in this once-proud nation, that, dear reader, may have to wait until the Parousia.