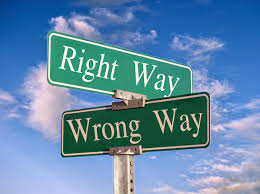 There is much talk nowadays about conscience, freedom of conscience, good and bad conscience, yet with little awareness, from what I can tell, of what conscience actually is. So, a definition:  Conscience is an act, specifically an act of the practical intellect, judging the moral quality of an act that we have done, are doing, or plan to do (cf., CCC, #1778).  We judge these acts ‘good’ or ‘bad’, according to what knowledge and formation we have, and then act accordingly

Of course, we may disobey this judgement of conscience, and avoid doing a good act we judge we should do (like help a friend move house), or we do the bad act we judge to be evil (like pornography).

Yet as the judgement of an imperfect human being with imperfect knowledge, and very adept at rationlization, our judgements of conscience may be wrong, and are at least usually not perfectly right.  We may judge a good act to be bad, or a bad act to be good, a judgement that is known as an erroneous conscience.

An erroneous conscience is one that acts in a state of ignorance, in which the agent does not know something about the act that he should know.  Such ignorance may be culpable, wherein he could and should know that an act is bad (or good), but does not take the time or trouble to find out, or deliberately blinds himself to the true moral quality of the act.

Ignorance may also be invincible, which means that the agent is not able by himself to overcome his lack of knowledge; in fact, as Pope John Paul points out in Veritatis Splendor, such a man is not even aware that he is in ignorance (#62).

The key is to make the best judgement of conscience we can, based on what the Church calls the ‘three criteria’ of the moral act:  the nature of the act (the object), our intentions, and the circumstances in which the act occurs, including its consequences.  However, left to our own devices, we are never entirely sure that what we choose to do, or not to do, is the best, or even good.  Behind the judgement of conscience there is an objective moral reality. Oftentimes, we only discover  our bad decisions after the fact, and face the consequences.

That is why we need the various kinds of law to help guide our conscience, especially for the bigger decisions in life, those that affect us or others in a fundamental way: Marriage, property, driving, violence, guns, medicine, employment and wages and working conditions, these and a myriad other things need to be governed by laws, so that we know the right thing to do, and the wrong thing not to do.

Saint Thomas in his treatise on law states that if people were brought up properly, with the requisite’ paternal discipline’, we would not need much law. But those who are not so well brought up, require laws so that, at the very least, they leave others in peace and free from harm to themselves or their property.

It is to inform and guide our conscience that God reveals the moral law, and offers us the divine law of revelation, and gives authority to human beings to make laws. Ultimately, however, the decision to act is ours, and God leaves us free, in the hand of our own counsel, as the Book of Sirach states.  John Paul II calls conscience the ‘proximate norm of morality’, and as Blessed Cardinal impishly quipped in his Letter to the Duke of Norfolk,  he would toast conscience before the Pope.

But we must not make light of law, nor make conscience into an autonomous god, especially in grave matters. That is why we cannot interpret the ambiguous passages of Chapter 8 of Amoris Laetitiae in discerning the state of one’s marriage, or one’s non-marital ‘irregular’ relationship, to mean that we decide we are married, or not married, based solely on our conscience, in what is called the ‘internal forum’, even with the advice and counsel of a wise pastor.

Many things in the realm of conscience can be so decided (like what to eat for dinner, or how to exercise), but we cannot wake up one day and decide that we are not, and never were, married to our spouse. And, on the contrary, a couple cannot just decide that they are married by a secret mutual agreement:  There must be a public declaration of marriage, bound by law, as in your ‘lawfully wedded spouse’, with a ring on the finger for good effect, and as an imperishable reminder.

The Council of Trent (1545-63) in the decree Tametsi forbade clandestine marriages, mainly for this reason.  Without public law, how could we, and how do children of the various sexual liasons, know who is married to whom?

In most cases, law does bind conscience, and as John Paul II declared more than once to the marriage tribunals deciding annulment cases, the validity of marriages, like the innocence of the accused, must be presumed, in and out of court. Once we make those vows (or any vows), we are bound until death do you part, unless clearly, in ecclesiastical law, it has been proved beyond reasonable doubt that your marriage was invalid and null.

I will end with a brief note on the Holy Father’s impromptu comments yesterday, with his  quip that, from his vantage point, he considers a ‘great majority’ of Christian marriages to be invalid (the transcript of which was later changed to ‘a part’), since the immaturity of couples limits their awareness of the fidelity and indissolubility required.

I must confess that I have thought along similar lines, as the multitude of lapsed, shacked-up, non-practising Catholics, with no intention of practising their faith, hop out of bed together, only later to march up unshriven to the altar to make their marital vows before God.  Priests tell me, and perhaps you, that this is the norm rather than the exception.

Although we cannot judge the culpability of their conscience, this is a disastrous situation, about which the Holy Father is right to be concerned.  But to claim that most marriages are invalid since couples are not aware enough of its ‘permanence’ will likely have deleterious efects. As  Edward Peters posits in a piece well worth a read, what will be the effects on those in struggling and difficult marriages?  Peters is correct to go back to Pope John Paul, who declared to the Roman Rota (the highest tribunal) that marriages must be presumed valid even if people enter this state imperfectly and with mixed motives.

We must keep in mind that the Holy Father’s off-the-cuff comments are not law, and are not binding in conscience, and only formative to the extent and in the sense that we take them to be.

And that ‘sense’ should always be orthodox, and in keeping with the tradition of the Church which, in this case, means presuming the validity of each individual marriage.  After all, the grace of the sacrament can do wonders not even, but especially, with our limited and imperfect nature.