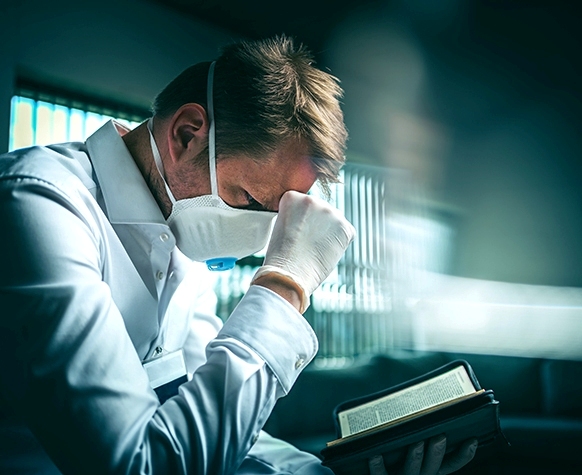 There is a science – one might more properly term it an art – to moral discernment in our Church’s tradition, and we offer it here as a guide for our readers, for their own conscience, as we make our way ‘by the tangle of our wits’ through the labyrinth of life.

Any voluntary decision – one that involves our will, or omissions that should have involved our will – is a moral one, which means it is imputable to us, for better or worse. We are called to do the good and avoid the evil, so make ourselves apt for heaven, as Saint Thomas puts it. For the primary concern is not so much what our choices do in the world, but what they do to us. As Pope John Paul II framed this vividly, in all the crimes against life, more harm is done to the perpetrator than the victim. But this also pertains to good works, in which God delights, for it makes saints who will join Him forever in eternity.

Conscience is key here, which is the act of judgement, whereby a person determines the moral quality of a concrete act, which means one that that he actually has done, is doing or will do. To make this judgement of the good and evil of our actions, conscience uses three criteria:

First, is the object intrinsically evil? By ‘object’, we mean the kind of act that it is, its species. There are certain actions that can never be done, for they are evil of their very nature. And by ‘evil’ we mean that they inevitably corrupt – to some extent – the person who does them: Fornication, adultery, contraception, murder (including abortion and euthanasia), suicide, lying, theft, blasphemy, apostasy, recreational drug use. More or less the Ten Commandments, as specified by the Church’s Tradition and Magisterium through the ages.

Second, if the object is morally neutral – as most acts are – then we discern our intention: Why are doing this, for what purpose and end? As the adage has it, the road to hell is paved with good intentions, but we might rephrase this that the path is also paved with bad intentions. Much of the moral life depends on our intention, which shapes our will, for better or ill.

As well, we must discern the intentions of others in any act with which we co-operate. If a stranger at a bar offers a young woman a drink, it’s not just her own intention at stake.

And, third, we discern the circumstances surrounding the act:  When, where, how much or little, and, most of all, its consequences, and how much good or evil may follow upon what we choose.

It is this last criterion that often most affects our decision, as we balance all the goods and evils of everything we do. If someone chooses a spouse, there are 3 billion or so others we cannot marry. All of our choices imply that we, and others, may have to suffer, even a little. As someone once put it, in life there are no solutions, only trade-offs, in which we strive to maximize the good, while minimizing the evil, in the principle of proportionality.

Bonum ex integra causa, as Thomas puts it: For an act to be ‘good’, all three criteria must be good. Perhaps not perfect, but at least good.

Where does that leave us with all these covid mandates coming down the pipe, in particular, the inoculation (the ‘vaccine’).

What of the object? Is it intrinsically evil? The Church has said no, while others demur. We must be careful here, for not everything ‘connected’ with abortion in some way is intrinsically evil – but that does not mean it may not be evil, depending on proximity, intent and circumstances. As the 2008 Instruction from the Congregation for the Doctrine of the Faith, Donum Vitae, taught in reference to abortion tainted vaccines:

danger to the health of children could permit parents to use a vaccine which was developed using cell lines of illicit origin, while keeping in mind that everyone has the duty to make known their disagreement and to ask that their healthcare system make other types of vaccines available. Moreover, in organizations where cell lines of illicit origin are being utilized, the responsibility of those who make the decision to use them is not the same as that of those who have no voice in such a decision. (#35)

As well, the letter from the same Congregation stated quite clearly that practical reason makes evident that vaccination is not, as a rule, a moral obligation and that, therefore, it must be voluntary.

I don’t see much reference to these caveats from our hierarchy, nor amongst physicians, Catholic or otherwise, nor from most of those who have opted to receive the inoculation. And what the Church has written in her official documents is of more binding force than the personal exhortations, even commands, of individual bishops and popes, who may go beyond the realm of their authority.

We should only use a medical product that is connected with abortion for proportionate reasons, with some qualm of conscience. And we should make our objections known, while striving to create an ethically viable alternative.

Which brings us to the next two criteria, intention and circumstances, which in this case go together. What good am I seeking (and, on the contrary, what evil am I avoiding?)

Am I in enough ‘danger’ from the virus to warrant taking the inoculation?

Do I pose any significantly greater danger to others by not taking the inoculation?

Does the inoculation in fact lower this risk, to myself, and others?

Does the inoculation pose a risk, proportionate to, or perhaps greater than, the potential virus? (A question which is especially pertinent to those under a certain age)

We may add any number of other factors in to this discernment, such as long term effects of both covid and the inoculation, both of which are not fully known at present. But the effects of these treatments on some is troubling indeed. If there one thing one cannot compress in rushed scientific studies, it is time – and only time will tell.

What makes this more complicated, and fraught, is the sheer coercive aspect of the mandates with the full power of the state (and too often the Church). People who demur – even asking for some time to wait for an ethical vaccine – are ‘fired’, forthwith (although they often do not call it that, for legal reasons), with no benefits, and not even employment insurance. They are quite literally kicked to the curb.

And students? They are forced out of school, colleges, universities, even training for trades, of which our society stands in such great need. It’s either submit, or you are persona non grata – in fact, scarcely even a person. As one columnist in the Toronto Star recently advocating for the ‘unvaxxed’ to be left to die in beds outside, untreated.

It is all odd, disconcerting, even unhinged, and I’m surprised more cannot see the thin edge of an intolerant tyranny being instantiated, with which we are being forced to cooperate.

It seems clear to this writer, and many others, given so many uncertainties, not least with the balance of risk and benefit, that the decision to receive this irreversible genetic therapy should be left up to the individual person and his conscience, and most definitely not forced upon one and all, especially the young, who have the most to lose, and the least to gain. Exposing them to potential, deleterious consequences – to say nothing of resisting for the sake of conscience – for what may be an uncertain and perhaps minimal lowering of risk to the elderly seems most definitely not proportionate.