If there is one thing universal in inductive research, it is doubt. So read the textbook, through which I was first introduced to the statistical method, by one R. Parker-Bausell, which I still use in my own teaching. We are never done, finished, complete in science, for there is always more to learn, and every model, every theory, every paradigm must be open to criticism, even doubt. As Thomas Kuhn wrote, revolution is in the very nature of the scientific method: For the science of motion, Aristotle gives way to Newton who gives way to Einstein. The same for Ptolemy, Copernicus, Galileo and on to Kepler and, again, Einstein, for cosmology. The same could be said for atomic, chemical, physiological and any number of other theories.

Well, the climate-change zealots will have to write a new textbook, for they are done with doubt, and done with anyone who doubts. It is now a fact, beyond all facts, a veritable factum factorum that anthropogenic climate change on a rather grand scale is truer than true, and deniers – or even doubters – are guilty, of such crimes as allowing the planet burn, dry up, the suffocation of every human, or something else really, really bad.

I am all for debate, and am willing to consider the hypothesis, even the theory. But is it just me, or are these zealots – for there are few other words to describe their passion – becoming unhinged, losing what marbles and measure they seemed to have even a scant year ago. One can almost hear the spittle on the CBC microphones. Now, nearly every story, every tragedy, from depression and suicide to natural and man-made disasters, is linked to ‘global warming’; or, when faced with the entire northern hemisphere in early winter deep-freeze, the irrefutable hypothesis of ‘climate change’ – for the climate, like the times, is always changin’.

Now, they claim, in drastic terms, the Paris Accord to reduce carbon emissions – signed just this month, to take effect in 2020 – is nowhere near enough. We need to triple our efforts, otherwise a vague and dire apocalypse – hurricanes and forest fires and earthquakes, oh my – loom within a decade or so. Saint John’s apocalypse has nothing on what these scientists, politicians and pundits paint with their computer models.

Prime Minister Trudeau is one of the most zealous of zealots, his mind formed by what passes for our university system, offering him little innate capacity to resist ideological brainwashing. Everything for him is about climate change – or homosexual and transgender rights, depending on context – the hues of his vision incapable of seeing reality as it is, including the real looming apocalypse for Canada’s faltering economy. Alberta’s oil – millions of gallons – is piling up in reservoirs, all dressed up and refined with nowhere to go. But don’t expect much, for we all know how he feels – yes the verb fits – about fossil fuels: The less, the better. Best to leave it where it is, as Alberta burns through $80 million in lost revenue per day.

Of course, as Canada freezes, most ordinary people – not the ultra-rich virtue signallers – are just wondering how to heat their homes within their limited budgets, and drive their cars to work to pay for it all. Instead of any subsidiary help, Trudeau as a new year Christmas gift, is about to impose upon Canadians a punitive carbon tax to ‘prompt’ us, along with every company and corporation, to shift to green-ish sources of energy, like the wind and the sun. I wonder what they think of nuclear – which currently provides about 60% of Ontario’s energy needs? Is it green enough? I was going to add horse-power, attaching a fleet of them to giant turbines, but they do belch forth various emissions of carbon-based gases and material. Like Kermit, it ain’t easy being green.

I’m all for keeping things clean and our environment unpolluted; I try to pick up garbage, and live rather simply – and by that I at least mean I don’t fly around in a private jet or live in a stadium-sized mansion. But I also don’t think carbon dioxide is a pollutant, and I have – yes – some doubts about the extent of anthropogenic climate change. The causal effect is just too complex, and, as the most objective data evince, by far the greatest effect on the Earth’s temperature is the Sun. I have lots of confidence in heliogenic climate change. And as the Sun seems to be entering a low-phase cycle (and, yes, there is also some doubt about that), we may rather be entering another mini ice age, which some theories present as the normal state of the Earth, with our current warming –but now waning – period anomalous. We may soon miss these halcyonic hazy days of relative summer.

But who really knows? Best not to wreck whole economies, enjoy what temperature and weather there is – about which we can do little regardless – and make the best of things. I for one would not mind things getting a bit warmer, and there are theories that a slight rise in temperature would be beneficial for the Earth and the humans upon it, from crop production to tourism – we could swim, kayak, sail, hike and bike in many more places – together with fewer energy and heating needs. Once upon a time we could grow fine wine in England and swim merrily in the North Sea, and another when you could skate on the Thames; when Greenland was green, and when it was, well, white. And all this before modern industry and human ‘carbon emissions’. One major volcanic eruption – Krakatoa, for a relatively recent example – can pump more CO2 into the atmosphere than three generations of the freeways and airports in L.A. and a dozen other cities.

And, anyway, as Father Schall has written so eloquently, we are not made to be on this planet forever which, as Salnt Peter prophesies, will eventually be destroyed, likely by ‘fire’, although we know not how, nor when.

This is not to belittle proper ecological stewardship, but, as I’ve written before, we should not make the Earth, nor this transient life, our final end. I don’t think the hype on global warming is really about science, nor even Christian moral teaching; for some, it may be displaced and unresolved guilt for other areas in their tragic lives; for others, it is a means of instantiating a rather deep and sinister ideology, anti-human and anti-life, for we all know whose footprints really cause the much-maligned carbon, and the fewer of those little feet, the better. This is not an unfounded conspiracy theory, for one may peruse these quotations, from amongst many, for a glimpse into the anti-life mind-set of the amongst the climate zealots.

Rather, dear reader, if your vocation is to marriage, go forth and multiply. If it is to remain single, use what resources requisite for your own vocation. Frolic in God’s good Earth. And worry not. Either way, remain rooted in the truth, with a healthy dose of doubt – at least a pinch – for everything, except, of course, the Faith. Never doubt that – even die for it, if necessary – for it’s what holds everything else together, including our own minds.

And on that fine note, today we celebrate Saint Edmund Campion, one of the most charming of the English martyrs, a witty and brilliant scholar and writer, a favourite of Queen Elizabeth’s, until his conversion to Catholicism in 1571 and ordination as a Jesuit priest in 1578. Edmund travelled to England, secretly, saying Mass, hearing confessions, preaching the Faith – his ‘Brag’ is one of the classic texts of apologetics – and reconciling the lost, until his betrayal in July of 1581. Since the excommunication of Queen Elizabeth by Pope Pius V in 1570, Catholicism in England had been illegal, and saying Mass punishable by death. Edmund was taken to the Tower and imprisoned for four months in a cell ironically called ‘Little-Ease’, being ‘racked’ three times, leaving his body a living wreck. Yet he handled himself more than admirably with the Anglican ‘divines’ who tried to best him in public debate. To no avail, for judges and juries, urged on by the Crown and her ministers, found guilty any Catholic, and especially any priest, who came before them.

After the sentence was read out, Edmund proclaimed in a clear voice:

In condemning us, you condemn all your own ancestors, all our ancient bishops and kings, all that was once the glory of England — the island of saints, and the most devoted child of the See of Peter. 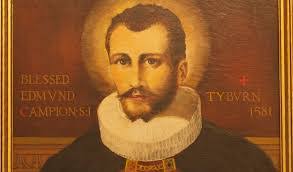 The good and noble Edmund – one of the last of the glories of merrie Catholic England – was hung, drawn and quartered on this day of December, 1581, four years after the first of the English missionary priests, Cuthbert Mayne, was put to death in the same horrific manner on November 29th,1577, and four decades after the deaths of the proto-English martyrs, Thomas More and John Fisher. England has been in something of a decline ever since. If the Faith is Europe, as Belloc wrote, so too the Faith is – or was – England.

We may soon be facing a new age of martyrdom, of one sort or another, if things continue to way they are. But with Edmund, be of good cheer. As today’s Gospel exhorts, we should hold our heads high, even as the sky is falling or the oceans swelling, for our redemption is near at hand.