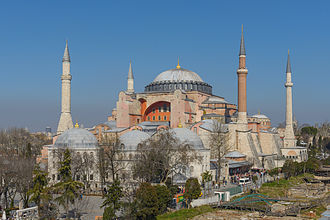 While we commemorate Our Lady of Mount Carmel, a few other anniversaries on this historically significant day, which are all sort of providentially linked to Carmel and Our Lady in some way:

In 622, the Muslims count the beginning of their own calendar, really their own history, (hence it is year ‘zero’ for them), when Muhammad and his followers moved from Mecca to Medina, and set up the first Islamic community, commemorated as the Hegira (the journey). They use our own Christian (Gregorian) calendar – for now. But just wait. Just as Hagia Sophia (Holy Wisdom) was once one of the most glorious churches in Christendom, and now, by Recep Erdogan’s recent presidential decree, will soon be turned into a mosque (as it was after the fall of Constantinople in 1453 until it was turned into a museum in 1931). This would be, as many are saying, a catastrophe – literally, a sudden turning, and not for the better. What the Muslims did to this Catholic basilica, they will do the same with the very march of time itself, beginning not with Christ, but with Muhammad. But God is in charge, through His Christ, the true Alpha and Omega, the beginning and the end – Anno Domini! Ad ultima!

And, while we’re on Hagia Sophia, it was on this day in 1054, that the Churches of the East and the West mutually excommunicated each other, in the great cathedral of basilica. Pope Leo IX, via his two legates, laid a bull of excommunication on the altar, and Patriarch Michael Cerularius responded in kind. Although the schism still remains – the ‘Orthodox’ not recognising the full primacy of the successor of Peter – we may hope that progress in healing has been made, especially since all anathemas and excommunications were lifted by Pope Saint Paul VI, in his meeting with Patriarch Athenagoras I during the Second Vatican Council in 1965. The work of ecumenism – primarily seeking the reunion of East and West once again – continues, and we may hope and pray with Christ ut unum sint, that we may be one, before that blazing day of Elijah.

This is also the day in 1753 on which Saint Junipero Serra set up his very first mission in what is now California, named after his fellow Franciscan canonized missionary, Saint Didacus of Alcalá (+1463), who evangelized Spain, and what are now the Canary Islands, caring for the poor and the sick, often miraculously. Didacus was also known as ‘Diego’ in Spanish, which is a diminutive of ‘Santiago’, or Saint James – the great Apostle, and place of pilgrimage in Spain. People gathered around the newly-founded mission – still an historical site, so long as our new anarchists don’t get the notion and chance to burn it all down – and the town grew into the modern city of the same name. We are much more dependent on our Catholic roots – and the great saints – than we might realize. To erase history is to erase ourselves.

And while on fire, today is also the anniversary of the first detonation of the atomic bomb, in 1945, over the testing site at Alomogordo in New Mexico, code-named by Robert Oppenheimer ‘Trinity’, ironically enough. No one really knew what would happen when the plutonium within the core was split, but all were quite blown away by the awesome might of the conflagration, which really was apocalyptic. As Oppenheimer reportedly whispered a line from the Bhagavad Gita, as he stood miles away in the observation zone: Now I am become Death, the destroyer of worlds. Indeed.

The United States is the only nation that has used the so-called nuclear bomb in war, less than a month later, destroying the cities of Hiroshima and Nagasaki, Japan, on August 6th and 9th. I am still flummoxed when I read of people – Catholics included – justifying this wholesale destruction of life. We may pray that, whatever God has in store for ending this world – and end it will someday – these may be the last use of atomic weaponry in war, and that Death has not the last word.