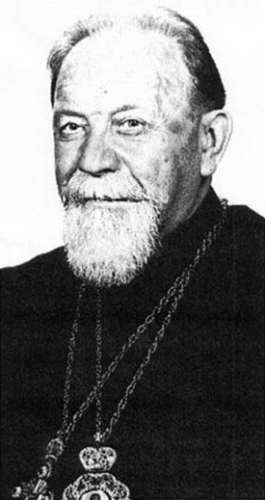 Those espousing the subversive doctrines of socialism and communism – which includes almost every Democrat presidential candidate, Liberals in Canada, almost the entirety of the ‘BLM’ movement, our university campuses, and whose insidious tendrils have even infected any number of the rest of us – should ponder the sufferings of two hardy and courageous bishops we celebrate today, who saw its evils first-hand, and who stood fast courageously, unto death.

Blessed Vasyl Velykchovsky (+1973) was a Ukrainian priest and later bishop of the Ukrainian Greek Catholic Church. A devout and holy man, he joined the Redemptorists in 1920, and spend a quarter of a century in a very active and fruitful sacerdotal ministry, until his arrest in 1945 by the NKVD for ‘anti-Soviet’ activities. Father Vasyl’s sentence of death was commuted to ten years of hard labour. After his release, he was ordained a bishop in 1963, before being imprisoned again six years later, during which he was tortured, physically and chemically. His body broken and approaching his well-lived three score and ten, he was exiled in 1972, arriving in Winnipeg, where there was a community of Eastern Catholics, and here the good bishop and martyr died on June 30, 1973.

Thirty years after his death, his body was found incorrupt, and rests in the beautiful shrine dedicated to him in the city of Winnipeg, not far from downtown, which I had the privilege of visiting, with a private guided tour, on a road trip across Canada in her sesquicentennial year. Well worth the drive, and may the good bishop intercede for his adopted and beleaguered country.

We also honour Blessed Nykyta Budka, (+1949), martyr and Ukrainian missionary bishop, who spent a number of years in Canada, setting up the Eastern rite eparchy to which Blessed Vasyl arrived years later, and which still thrives. Returning to his homeland in 1928, Bishop Budka was arrested and imprisoned, dying in the Gulag 1949. His untiring and unwavering holiness, his adherence to the truth, have given the Church, and the Eastern rites in particular, a spiritual testament and foundation to build upon and share.

So although Winnipeg gets a bad rap amongst Canadians -mosquito capital, brutal winters, nothin’ to do, and so on – there are treasures to be found. So let us rejoice in what is good, and two saints who have laboured in your midst, and one incorrupt one still resting there over whom one can pray and intercede, well, that ain’t bad at all.

We could all, bishops, priests and laity, use a good dose of their courage and clarity. Saints Vasyl and Nykyta, orate pro nobis, or, if I may, molit’sya za nas!