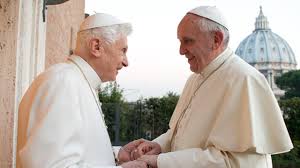 In a 2011 article, Father Brian Mullady ponders the question of homosexuality in the priesthood, a theme abounding everywhere, except where it might most be expected – namely, the synod on sex abuse currently underway in Rome.

We invite the reader to ponder these words Father Mullady quotes from Pope Emeritus Benedict XVI’s memoir of the same year as his article, Light of the World. Would that this could be printed on a one-page pamphlet, and distributed to all the episcopal participants, as they ponder causes and solutions to what is vitiating, corrupting and obscuring the Body of Christ:

The issue at stake here is the intrinsic truth of sexuality’s significance in the constitution of man’s being. If someone has deep-seated homosexual inclinations—and it is still an open question whether these inclinations are really innate or they arise in early childhood—if, in any case, they have power over him this is a great trial for him, just as other trials conflict other people as well. But this does not mean that homosexuality thereby becomes morally right. Rather it remains contrary to the essence of what God originally willed.

Homosexuality is incompatible with the priestly vocation. Otherwise, celibacy itself would lose its meaning as a renunciation. It would be extremely dangerous if celibacy became a sort of pretext for bringing people into the priesthood who don’t want to get married anyway. For, in the end, their attitude toward man or woman is somehow distorted, off-center, and, in any case, is not within the direction of creation of which we have spoken. The Congregation for Education issued a decision a few years ago to the effect that homosexual candidates cannot become priests because their sexual orientation estranges them from the proper sense of paternity, from the intrinsic nature of priestly being. The selection of candidates to the priesthood must therefore be very careful. The greatest attention is needed here in order to prevent the intrusion of this kind of ambiguity and to head off a situation where the celibacy of priests would practically end up being identified with the tendency to homosexuality. (emphasis added)

On this latter notion of celibacy and same-sex attraction, see the recent article in Crisis from Ryan Williams.

To conclude with Pope Emeritus Benedict:

Well, that is just one of the miseries of the Church (homosexuality in the clergy). And the persons who are affected must at least try not to express this inclination actively, in order to remain true to the intrinsic mission of their office.2

Miseries of the Church? Homosexuality in the clergy? Might what were true a scant nine years ago be even more true today?