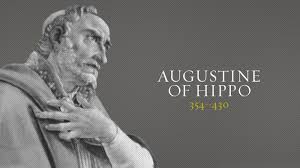 What can one say about Saint Augustine, the great bishop and doctor of the Church, who died on this day in the year of Our Lord 430, in the midst of the invasion of the Vandals, a barbarian horde which streamed into North Africa (then Roman territory) from the tip of Spain now known as Gibraltar. Augustine wrote on nearly every topic then known, clearly and profoundly.  There is an adage that there was not even enough time for the saint to write what we wrote, even in the long span given to him (he died in his 76th year).  Perhaps.  Most authors in that era used amanuenses, dictating their works to scribbling scribes; or their sermons were copied by others, from listening or memory.

What we do know is that owe an untold debt to Augustine, to his great mind and soul which he put fully at the service of God, His Church and His people.  The philosopher Albert North Whitehead once declared that all philosophy was a footnote to Plato, and we may add that all theology is really a footnote to Augustine.  Even if he did not get everything precisely right, his principles, thoughts and ideas form the foundation for theology, as well as many of the quotations used by the later Doctor, Thomas Aquinas, in his Summa Theologica and other writings.

We know not what would have happened if Augustine had not converted, had not his mother Monica persevered so many years in prayer and supplication for her wayward son, wandering through the mires of his own hedonism (often exaggerated, methinks), and the thickets of Manichaeism and neo-Platonism.

What we do know is that he did eventually find that ‘beauty, ever ancient and ever new’, which in some way he was searching for all along, and his writings (and prayers) have led countless others to the same happy conclusion.

Would that all restless souls find their rest in Him in this chaotic era of the new Vandals, as did Augustine of old.