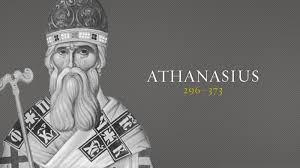 Today is the memorial of one of the most heroic bishops in the history of the Church, the great Saint Athanasius (+373), who stood contra mundum, against the world – mighty foe of Arianism, and the hero of Blessed John Henry Cardinal Newman, whose essays on the fourth-century bishop still make for delightful and edifying reading. Highly recommended.

It was by studying the early Church that Newman realized that there was no ‘Anglican’ via media between what he saw as the ‘excesses’ of Rome and the poverty of stripped-down Protestantism. No, from the very beginning, Newman discovered, there was only Catholicism, with all that entails, and as he famously concluded ’to delve into history is to cease do be a Protestant’. Quite so.

Athanasius was consecrated bishop of the great see of Alexandria in 328, while still very young (some even dispute whether he was of the then-canonical age of 30). As the current bishop, Alexander, lay dying, the people acclaimed ‘Athanasius for bishop!’, as they would do in the African city of Hippo for Augustine toward the end of the same century.

Athanasius thought of fleeing, realizing the difficulties that taking on the task of bishop would bring in such a world, but, like Augustine and countless others through the ages, he accepted God’s will.  Even before his episcopacy, as Bishop Alexander’s theological peritus, young Athanasius was one of the main influences at the Council of Nicaea in 325, convoked by the Emperor Constantine primarily to determine the foundational question of ‘who was Christ?’ (as well as fixing a universal date for Easter), which would be the defining question of his episcopacy.

For there soon arose the mysterious figure of Arius, a deacon, also from Alexandria, who had come to the conclusion with his logic-chopping mind that Christ was, and could not be, God, not in the sense that the Father was God. For was not God but one, and undivided? How could He give His nature to another? Christ therefore must have been created at some point (‘there was a time when he was not’, was the Arian catchphrase). Christ was the greatest of God the Father’s creations, perhaps, but a creature nonetheless. Such was Arianism, a theory that grew wildly popular, spread by hymns and jingles, and quite conducive to the Emperor’s frame of mind. After all, if Christ be not God, then God was quite distant and remote, and he, Caesar, would again be all-supreme. Christ, as a creature just like Caesar, could bend to his will.

Of course, the consistent orthodox belief of the Church is that Christ truly is God. As the creed from Nicaea (and the later council of Constantinople) has it, Christ is ‘God from God, Light from Light, true God from true God, consubstantial with the Father’.

It is for championing that term ‘con-substantial’, in the original Greek, homo-ousios, literally, the ‘same in being’, that Athanasius is most remembered.  Originating from Roman influence (even though Greek), homo-ousios declared that Christ has the same ‘being, substance, nature as the Father, that He truly was and is divine, in the same way the Father is.  I and the Father are one and he who has seen me has seen the Father.

Some Arians sought a compromise, and most of the episcopacy was willing to go along to get along, which sounds sort of familiar:  After all, why not all agree on homoi-ousios, that the Son is similar to the Father? But Athanasius, like any good theologian never one for obfuscatory ambiguity, saw that the addition of that one iota would undermine the Faith of the Church. After all, are we not all ‘similar’ to God, in some way, however distant? But only Christ is the same as the Father, His very image, the ‘Son’, the Second Person of the Blessed Trinity, sent into the world, Who assumed a human nature, while retaining His divine nature, and remaining a divine Person, who lived, suffered and died for our sins, so opening the gates of heaven to all men, now and until the end of time.

But the world would not have it. From the Emperor, to the bishops, to priests and potentates, almost all infected with the virus of the Arian heresy, and it was Athanasius contra mundum – Athanasius against the world, including many of his own bishops – the red-haired, stout-hearted, implacable bishop refusing compromising collegiality when the truth – and the Truth – was at stake. He suffered five exiles under various descendants  and successors of Constantine, who all preferred the more rational, and politically expedient, Arianism, with Christ as a teacher, pedagogue, rabbi, angel, spirit, anything but God Himself, the Panto-crator, Ruler of All, to Whom even empires and emperors must submit.

All for the sake of one iota, and that homoousios…

Athanasius saw with the clarity of mind, the fruit of a sanctified and disciplined life, that orthopraxy, literally, ‘right practice’ (or living) requires orthodoxy, ‘right teaching’, and that heresy (or heterodoxy) will always, always eventually lead to hetero-praxy, living in a way contrary to the faith, right reason, and the will of God.

In other words, behind every heresy, there is often a moral problem.

The Incarnation is the central and pivotal event in human history, and to remind us of this, we are supposed to ‘bow profoundly’ at the mention of the Incarnation in the Creed at Mass, et homo factus est. I don’t think many actually do this, and would recommend going back to full-scale genuflection, to avoid the awkwardness of the bow, and so that we are all on the same liturgical page.

On that note, we may wonder how many Catholics in our vast suburban parishes know and accept the full truth of Christ’s divinity, and what this has done for them.  How aware am I, who profess to be so? As Athanasius put it, following the earlier Irenaeus, for the Son of God became man, so that we might become God. Just spend a few moments, if not hours, days, weeks and years, pondering that truth.

That really is the central point of our Faith, and why Saint John warns that the surest sign of the spirit of ‘Anti-Christ’ is a denial of the Incarnation, that God took flesh and a true human nature; for the Devil well knows that it is this truth which stands as the basis for the inviolable dignity of each human person, made in imago Dei, sharing a nature that now shares in the very nature of God Himself.

For it is only by demoting Christ that the Antichrist can promote himself. And that spirit of Antichrist will not rest until the very end, and as the Gospel prophesies:

Indeed the hour is coming when whoever kills you will think he is offering service to God.  And they will do this because they have not known the Father, nor me…

it is no accident that a certain austere, humorless, desert religion, demanding worldwide ‘submission’, now waxing strong, has as one of its central theses the denial the Incarnation, indeed the denial of any direct involvement of God-with-man. But then so do the ‘religions’ of atheism, secularism, hedonism, humanism. It matters not the means; all the Devil wants is for us to renounce Christ, then we would be firmly in his grip. For he who is not with me, is against me; whoever does not gather with me scatters….

We should pray each day that we might stand firm with Athanasius against anything that violates the full truth of Christ, and, hence, the truth of Man. One of Pope Saint John Paul’s favorite quotations is that “Only in the mystery of Christ does the mystery of man make sense‘.

We just completed our academic year in our own strange circumstances here at Our Lady Seat of Wisdom College, and each year the sight of our fresh-faced graduands, soon-to-be alumni, completing their course of studies, I become more convinced of the need for a solid Athanasius-esque intellectual formation, both in reason and in faith, especially for the youth.  For only such a foundation can keep them going in what look to be ever-more confusing difficult and tumultuous years ahead. But they need not be, if we keep our eyes fixed on Christ and the truth He offers.

Yet even beyond youth, we need a lot more orthodoxy in our Catholic community, and by that I mean a full immersion in the truths of our religion, making them ‘our own’.  This would go a long way to more vibrant and solid faith which could, and would, convert the world, as the Church is called to do. To modify a saying of Saint Catherine of Siena, if the Church were what she is meant to be, the entire world would be converted tomorrow. The heart, indeed everything else, follows the mind, and it is only the truth that will truly set us free.