A blessed feast of Saint Andrew to all our readers! Yes, today, the last day of November, is when we celebrate the first Apostle called, along with his brother, the first Pope. Andrew’s patronage includes Scotland, Russia, Ukraine and Greece, for reasons that are somewhat historically tenuous.  But, as Belloc says, behind every legend, there is always some truth.

What we know of Andrew – whose name is Greek for ‘man’ or ‘manly’, and we could use a few more of those – we take from the Gospels. There are similar accounts in Matthew, chapter 4 and Mark 1, where he and his brother leave their nets ‘immediately’ (eutheos) upon being called by Christ. There is, or should not be, a delay when Christ calls.

As Saint John Chrysostom put it:

He brought his brother to the very source of light, and Peter was so joyful and eager that he would not delay even for a moment.

Andrew is not named in Luke’s account of this initial calling, but his presence is implied, and made clear later on; and in the longer account of John, Andrew is a disciple of John the Baptist, and, again, ‘immediately’ recognizes Jesus as the Messiah, running off at once to tell his brother.

There is a legend that the ship upon which Andrew was sailing in his missionary endeavours veered off course in an unruly wind, and landed on the east coast of Scotland, on the site of the town that now bears his name (it must have been quite the gale).  At the very least, we do know his relics were brought there, for more likely he preached and was crucified in the city of Patras in Achaea (now Greece) – on a crux decussata, an X-shaped cross, the ‘saltire’ that is now the flag of Scotland – since, like his brother Peter who was crucified upside down, he considered himself unworthy to die in the same manner as his Saviour. It has been handed down that the Apostle survived two days on the cross, preaching to the crowds, converting who knows how many.

The town of Saint Andrew’s was once the centre of Catholicism in Scotland, with its famous university, founded under the aegis of the Church in 1413 (and where a Catholic friend of mine now teaches at their Institute for Theology, Imagination and the Arts… imagine that!), and, not least, its once-glorious cathedral, completed three centuries before that, in 1148.

Alas, the town, and its cathedral, were ransacked by fanatical Presbyterian Protestant mobs in the revolts of 1559, whipped into a frenzy by the quasi-demonic preaching of the fiery apostate priest John Knox, soon after the Holy Mass was proscribed under the same Knox – the hatred of the sacrifice of the Mass is one of the binding threads of the Protestant arch-heretics, and is something to behold. The cathedral’s prized religious and liturgical treasures were dispossessed and scattered – all that ‘Popish frippery’ – the glorious stonework left to rack and ruin in the wind and rain coming off the nearby sea.  The hauntingly beautiful relic that is left, showing it to be the largest church ever built in Scotland (390 feet long), still stands is a testament to the state of faith in the once faithful land, where I happened to be born. 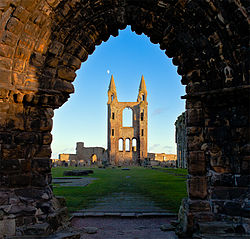 The Faith itself was ruined spiritually by the ravages of this austere and bitter anti-Catholic Calvinism, with Scotland’s subsequent inevitable descent into secularism, hedonism and the vapid religion of soccer or, if you will, football.  Ironically, this is also the anniversary of what is considered the first international ‘football’ game, between Scotland and England in 1872, before a crowd of 4000, resulting in a 0-0 draw, even if the dribbling and playing were quite good on the soggy, rain-drenched field.

Nothing wrong, and much that is good, with football or sports in general, but in contrast with (pre-Covid) packed stadiums, it was reported n a BBC article from a few years ago that only 7.2% of Scots attend any sort of church service regularly – whatever ‘regularly’ means, with half of these over the age of 65, and that includes all so-called ‘denominations’ (even though the drop in practice is least amongst the Catholics).

However those numbers are interpreted, we’re a long, long way from the manly zeal of Saint Andrew. Then gain, I was glad to discover that the cathedral ruins ae longer than a football pitch, a sign at least of something, a faint glimmer of hope.

For what was might be again, for the Faith never dies; there are always embers and pockets that may be fanned into flame, and signs here and there of such a resurgence in Scotland, even if much is troubling. God always has a plan, and can act in a way we may not expect, like with Andrew quietly fishing on a morn in Galilee, when the Incarnate God walked into his life.

For a window into the great soul of Andrew, we may hearken again to the words of Saint John Chrysostom in today’s Office, meditating on Andrew’s exclamation to his brother Peter: We have found the Messiah, that is to say, the Christ

Notice how his words reveal what he has learned in so short a time. They show the power of the master who has convinced them of this truth. They reveal the zeal and concern of men preoccupied with this question from the very beginning. Andrew’s words reveal a soul waiting with the utmost longing for the coming of the Messiah, looking forward to his appearing from heaven, rejoicing when he does appear, and hastening to announce so great an event to others. To support one another in the things of the spirit is the true sign of good will between brothers, of loving kinship and sincere affection.