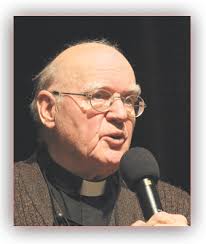 It is fitting on this feast of Our Lady of Guadalupe, patroness of life, that we offer a hearty and warm congratulations to Father Alphonse de Valk who yesterday celebrated 50 years a priest.  Father de Valk, a faithful member of the Congregation of Saint Basil, and the founder and editor-emeritus of both the Interim and, until a few years ago, Catholic Insight magazine, which he began in 1993 as a beacon of Catholic culture and hope, is a true Canadian hero.  Born in 1932, Father de Valk was ordained (a ‘late vocation’ as he called himself) on December 11 in 1965, three days after the close of the Second Vatican Council.  I have known Father de Valk for many years, first meeting him soon after I ‘got off the boat’ from bonnie Scotland and settled in Toronto as a wee lad (with my family in tow, of course), and, looking back, I can say that he truly embodied and lived out the true spirit of Vatican II.

About being a priest, in which vocation he never faltered, Father de Valk had this to say:

“Being a priest is a tremendous vocation. It allows you to do so many things for people but always to live on the highest possible level of ideals. It certainly means serving the Lord in the world and for me the intellectual apostolate of teaching, growing in study and doing the will of God. To be a priest is to preside at the liturgy, to teach the faith and to do everything that Christ did as a Priest.”

Father de Valk began a doctorate in the early seventies, but, with the abortion battle just then looming, decided to dedicate his life to the pro-life cause and the victory of the culture of life.  As he put it, he did not want to be like the German professor writing ironically in the midst of World War II about the ‘Fall of the Babylonian Empire’ while bombs were reducing his city to rubble.

Thus began a very fruitful and productive priestly life, with hundreds  of articles, essays, pamphlets and books in the cause of life and true Catholic culture.  Again, in his own words:

“As a historian, my entrance into the pro-life movement came from a realization that an er­ror in principle in a grave matter of life and death either has to be reversed or it will destroy society. Anti-Semitism in Germany be­tween 1918 and 1939 should have been redressed because the Nazis made use of it and it destroyed Germany. Likewise, legalized abortion will destroy Western socie­ties unless we redress it.”

And redress it he did.  Father de Valk did not balk at criticizing our culture and those within it, in the spirit of humility and charity, without which no growth in virtue is possible.  His vivid words and lively writing style will stand the test of time.

A true pro-life witness, he put his words and beliefs into action.  Father de Valk spent countless hours faithfully praying in front of Morgentaler’s abortuary, being arrested and spending two weeks in jail.  He was one of the ‘fourteen’ sued by the immoral  and reckless NDP government.

Father de Valk is the co-founder of the Catholic Civil Rights League (1985), the Family Coalition Party (1987) and, as mentioned, Catholic Insight (1993), which he edited until a few years ago.

I myself am humbled and grateful to continue the work editing of the magazine, which sadly had to discontinue print production last spring, now continuing on-line.

And we should all be grateful to Father de Valk for his untiring work as a priest, a scholar, a writer and a witness for God and His people, especially the most defenceless.  May God reward him far more than we can, with as many more years as a priest in this world as He so wills, before a well-earned eternity.

And Our Lady of Guadalulpe, patroness of life, ora pro nobis!

(I am indebted to the Interim article on Father de Valk’s 25th anniversary for much of the biographical material and quotations.  Editor)