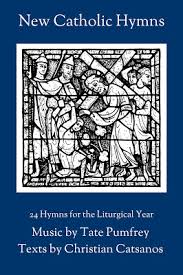 It is unusual to encounter newly-written sacred music that appeals to traditional hymnodic taste; perhaps it is unsurprising that when such music does appear, it frequently comes from young composers. In any event, following a generation’s worth of sentimental worship songs, the recently-published New Catholic Hymns: 24 Hymns for the Liturgical Year is a traditional gem. The product of a collaboration between Canadian composer Tate Pumfrey and Australian writer Christian Catsanos – both in their twenties – the booklet contains twenty-four hymns which may be sung throughout the Church year, one for each liturgical season as well as for major feasts such as the Ascension, All Saints and All Souls, and Christ the King. Also represented are feasts like Candlemas and Gaudete and Laetare Sundays.

Prevailingly traditional in sound, the hymns do not fall prey to modernising tendencies. Perhaps their most prevalent influence is the English composer Ralph Vaughan Williams, whom Pumfrey cites on his website as an inspiration. A number of the hymns recall Williams’ stately High Anglican style, for example “O Blest the Man Who Eats of Thee” (#17). Arguably the triumph of the collection, this hymn boasts a beautiful melody complemented by rich harmony and illustrates majestic text which reads like seventeenth-century poetry. (The hymn can be heard on YouTube.) “Salve Regina! Hail Thou Queen!” (#21), on the other hand, in both text and melody might sit next to classic Marian hymns like “Immaculate Mary” or “Hail, Holy Queen, Enthroned Above”. (This hymn is also on YouTube.) Yet other hymns call to mind Genevan psalm tunes like “O People That on Earth Do Dwell”. While a couple of hymns are harmonically a little weaker, the vast majority are worthy of a place in any hymnal.

As for the texts, in a time when many publishers are simplifying old hymns into everyday language, Catsanos’ poetry flies in the face of that trend. While contemporary worship music tends towards free-form poetry and irregular verses, there is none of that here. The metre is steady and strict, leading to word choices and order that are sometimes pleasingly archaic, or rather timeless, as in “Hail, Thou King of Risen Splendour” (#13):

All my feeble faults dispelling,

All my sorrow turned to joy,

All my fear and darkness quelling,

For the gates of heaven’s portal,

By Thy sure Ascension power,

Now are oped by Thee Immortal,

In the glory of this hour!

Although a few verses have their imperfections, the above comparison to seventeenth-century poetry holds true for most of the text. For many traditionally-minded Catholics, such elegant poetry is by far the most preferable in a hymn.

The liturgical use for New Catholic Hymns is mixed. A significant minority of the hymns would be difficult for congregations to sing due to their more complicated melodies. The majority, however, follow traditional styles closely enough that they could be rapidly learned by anyone familiar with classical hymns. (In fact, this reviewer’s own parish has sung more than one of them at Sunday Mass.) The harder ones could be sung by the choir, so a church choir might well invest in this booklet as a resource for offertory or Communion pieces. The main downside would be for the organist, since the paperback booklet does not stay open by itself on the rack. But this is a small concern and easily remedied.

Modern worship music typically stresses the emotional side of faith, the personal relationship with God. While that aspect holds an essential place in spiritual life, there is a tendency today to focus on this, to the exclusion of theological richness, and to put too much emphasis on the self instead of God. Through beautiful words and music, the hymns in New Catholic Hymns redirect the focus of praise and worship back to God Himself.

The Fightin’ Friar of Capistrano