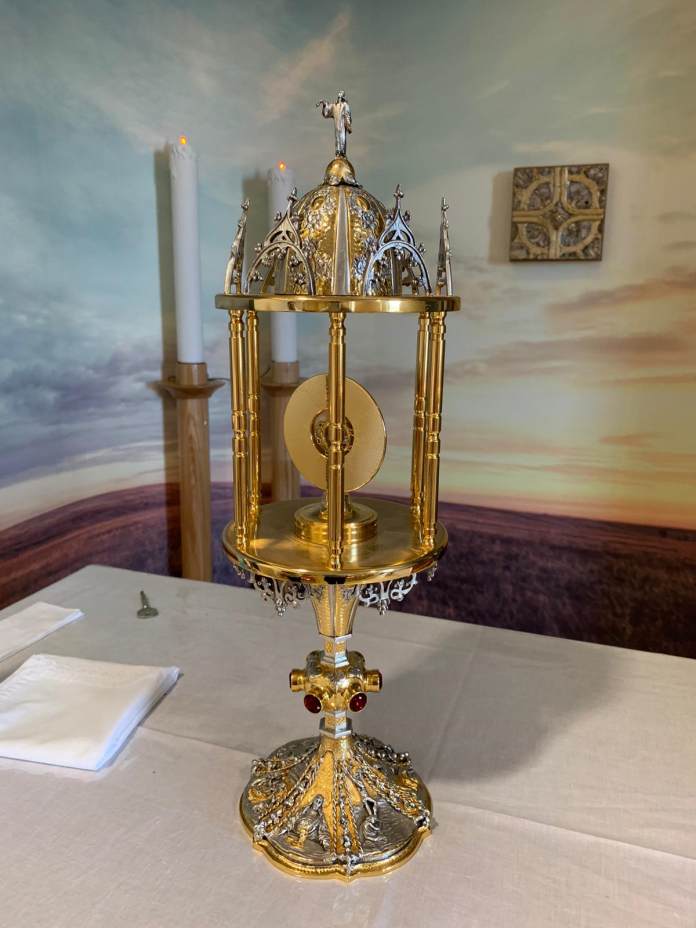 In his apostolic exhortation on the call of holiness in today’s world, Gaudete et Exsultate, Pope Francis wrote: “The saints are distinguished by a spirit of prayer and a need for communion with God. They find an exclusive concern with this world to be narrow and stifling, and, amid their own concerns and commitments, they long for God, losing themselves in praise and contemplation of the Lord” (147). It was because his life was so deeply marked by constant prayer and, as a result, minced with the abundant fruit of useful apostolic labour, that we decided to bring in our midst the precious relic of Blessed Nazju Falzon at Sir Anthony Mamo Oncology Centre here in the island nation of Malta.

In fact, Blessed Nazju recently came to visit us at the Oncology Centre. Here I would like to publicly thank Fr Anton Farrugia OFM who helped so that this would take place. Blessed Nazju’s visit animated within us the great spirit of prayer. As a matter of fact, in each and every ward, including the day ward, the administration section and the reception area whereby his relic was put for prayer and veneration, many took the time to stop and pray before it. In their innermost core they must have intensely felt that this humble man, whose life was like that fragrant incense burning in front of God’s holy throne of grace, was generously interceding for them and their loved ones.

Regarding intercessory prayer, within the same apostolic exhortation, the Holy Father observes: “Prayer of intercession has particular value, for it is an act of trust in God and, at the same time, an expression of love for our neighbour… Intercessory prayer is an expression of our fraternal concern for others, since we are able to embrace their lives, their deepest troubles and their loftiest dreams. Of those who commit themselves generously to intercessory prayer we can apply the words of Scripture: ‘This is a man who loves the brethren and prays much for the people’ (2 Mac 15:14).” (no. 154).

This is what Blessed Nazju did for all of us when he visited the Oncology Centre. He entrusted us all, with our life stories and circumstances, in God’s loving tender care and mercy. The more we prayed to him to intercede for us and our needs the more we felt his profound love he cultivates for each and everyone of us. Blessed Nazju’s fraternal concern not only united us more to God but made us feel that we joyfully appertain to the one Maltese family in which we are all brothers and sisters. After meeting him in the place where we ourselves receive treatment and work to help others get better until they are healed, we could share sincerely what Onias, the high priest, said in the Second book of Maccabees: “This is a man who loves the brethren and prays much for the people” (2 Mac 15:14). But who is this man whose relic kept convincing us of his complete fraternal care for us, both Maltese and not? Who is this brother whose presence brought us so much hope in a place of suffering and angst?

Blessed Nazju Falzon, himself a professed member of the Secular Franciscan Order, was born in Valletta, Malta, on 1 July 1813. He obtained a doctorate in law and although he received the minor orders, he, like St. Francis of Assisi, did not wish to be ordained as a priest on the basis of his unworthiness. He taught catechism to local children and became a mentor to the British soldiers and sailors stationed in Malta at that time. In his approach to them, few of whom were Catholic, he anticipated the ecumenical spirit of respect and dialogue. He baptized hundreds and became the pastor of those who stayed on the island. Nazju drew his strength from the Eucharist, his devotion to the Virgin Mary and imitation of Saint Joseph. He died on his birthday in 1865 and was buried in the Falzon vault in the Church of the Franciscans in Valletta where his remains are still venerated. Saint Pope John Paul II confirmed that the late Maltese Cleric led a life of heroic virtue and beatified him on 9 May 2001.

Who can forget the beautiful words which minutely describe Blessed Nazju’s holy life that came out from the lips of the Polish Pontiff during that marvelous day for our country which saw Nazju Falzon, Dun Ġorg Preca and Sr Maria Adeodata Pisani all beatified? It is all the more useful to bring those life-giving words back to life!

“The Servant of God Ignatius Falzon also had a  great passion for preaching the Gospel and teaching the Catholic faith. He too put his many talents and his intellectual training at the service of catechetical work. The Apostle Paul wrote that ‘each one must do as he has made up his mind, not reluctantly or under compulsion, for God loves a cheerful giver’ (2 Cor 9:7). Blessed Nazju was one who gave abundantly and cheerfully; and people saw in him not only boundless energy but also deep peace and joy. He renounced the worldly success for which his background had prepared him, in order to serve the spiritual good of others, including the many British soldiers and sailors stationed in Malta at the time. In his approach to them, few of whom were Catholic, he anticipated the ecumenical spirit of respect and dialogue, which is familiar to us today but which was not always prevalent at that time.

Ignatius Falzon drew his strength and inspiration from the Eucharist, prayer before the Tabernacle, devotion to Mary and the Rosary, and imitation of Saint Joseph. These are fountains of grace from which all Christians may drink. Holiness and zeal for God’s Kingdom flourish especially where parishes and communities encourage prayer and devotion to the Blessed Sacrament. I urge you therefore to cherish your Maltese traditions of piety, purifying them where necessary and strengthening them with sound instruction and catechesis. There would be no better way of honouring the memory of Blessed Nazju Falzon” (# 4).

In no other time other than the present era, dominated as it is by covid-19 pandemic, are we appreciating more the power of the Eucharist, the Rosary and the importance of the life of the saints! And, within such a context of hardship and distress, God’s mercy was made visible to us, at the Oncology Centre, by the providential visit of this great man of faith and apostolic activity. Amongst us we had a man of God who, following St Paul’s example, his father in faith, like him could easily affirm: For though I am free from all men, I have made myself a slave to all, that I might win the more (1 Cor 9:19). And by impressive humility and goodness of heart Blessed Nazju did in fact win the hearts of many to Christ.

United in prayer, be it in a ward, office or, yes, in a corridor, we prayed to God through his intercession as one voice of faith:

Lord, Our God, You, in your infinite kindness, choose from amongst your people, people like them to serve them and help them acquire and maintain the grace of peace and faith in you. We thank you for choosing from among the people of Malta, the Blessed Ignazio Falzon who through his teaching and dedication was of great help to the Maltese and the Service people of his time. May he, by his prayers be of comfort to us and to all those who turn to him for assistance. We pray that, if this is your will, he shall be counted among the hosts of Your Saints. Through Christ our Lord. Amen.

Make this prayer your own too! And if you obtain a grace through Blessed Nazju’s intercession you can post it on Facebook Ignatius Falzon 1813-1865 – Posts. In this way you can contribute in the canonization process of Blessed Nazju Falzon which will, one day, lead the pope to declare him universally a saint.