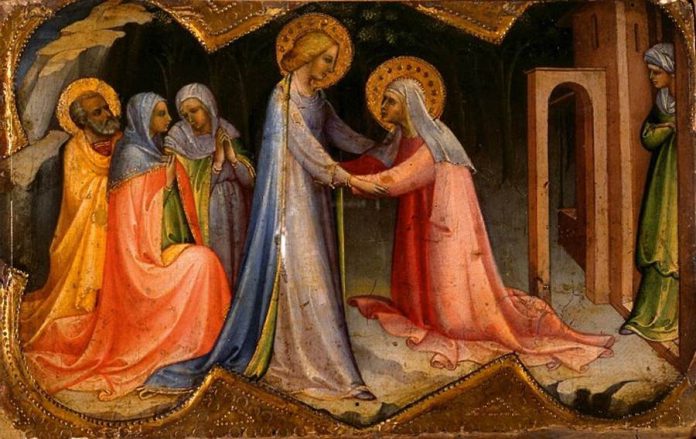 A blessed feast of the Visitation, to all our readers, wherein we recall the meeting of four chosen souls: Our Lady, Saint Elizabeth, and their respective yet-to-be-born children, the newly-conceived Son of the Most High, and Saint John the Baptist, six months along. Quite the event, if hidden from the world’s eyes.

The commemoration of this feast goes back to the Middle Ages, when it was originally celebrated on July 2nd, the octave after the Birth of Saint John the Baptist on June 24th. The feast of the Messiah’s precursor has been largely secularized, if not entirely forgotten – in Quebec it is now la Fete Nationale, the Catholic roots of la belle province all but withered, but still with some life. The liturgical revision after Vatican II in 1969 moved the feast to this last day of May, between the Annunciation (March 25th) and the Baptist’s birth, to harmonize more fittingly with the Gospel story.

The meeting of Mary and Elizabeth and their children, the six-month old John the Precursor who would prepare the way for Christ’s coming, is a poignant one for our age. With motherhood degraded, if not derided, unborn children expendable, not even persons, dependent upon the whim – ‘choice’ in our euphemistic language – of the mother. But how can non-persons ‘leap for joy’? And if they can feel joy, so too sorrow and pain.

We need to recapture such joy, and hope, in motherhood, in children, in families, the very foundation of society. Elizabeth describes Mary as ‘blessed’ – makaroi in Greek, the term they used for the ‘happiness of the gods’, but taken up by Christ in the beatitudes to mean the happiness of God Himself, offered to each one of us, if we but repeat with Mary, fiat be it done unto me according to Thy word.  No wonder John, the first Evangelist, jumped for joy.

This feast also quite appropriately closes off the month of Mary, as we seek her example and intercession. As Pope John Paul II declares in his commemorative homily in the first year of his pontificate:

But what is the mysterious, hidden source of this joy? It is Jesus, whom Mary has already conceived thanks to the Holy Spirit, and who is already beginning to defeat what is the root of fear, anguish and sadness: sin, the most humiliating slavery for man.

So, with the Mother, may our souls too ‘magnify the Lord, and rejoice in the Lord, our Saviour.’