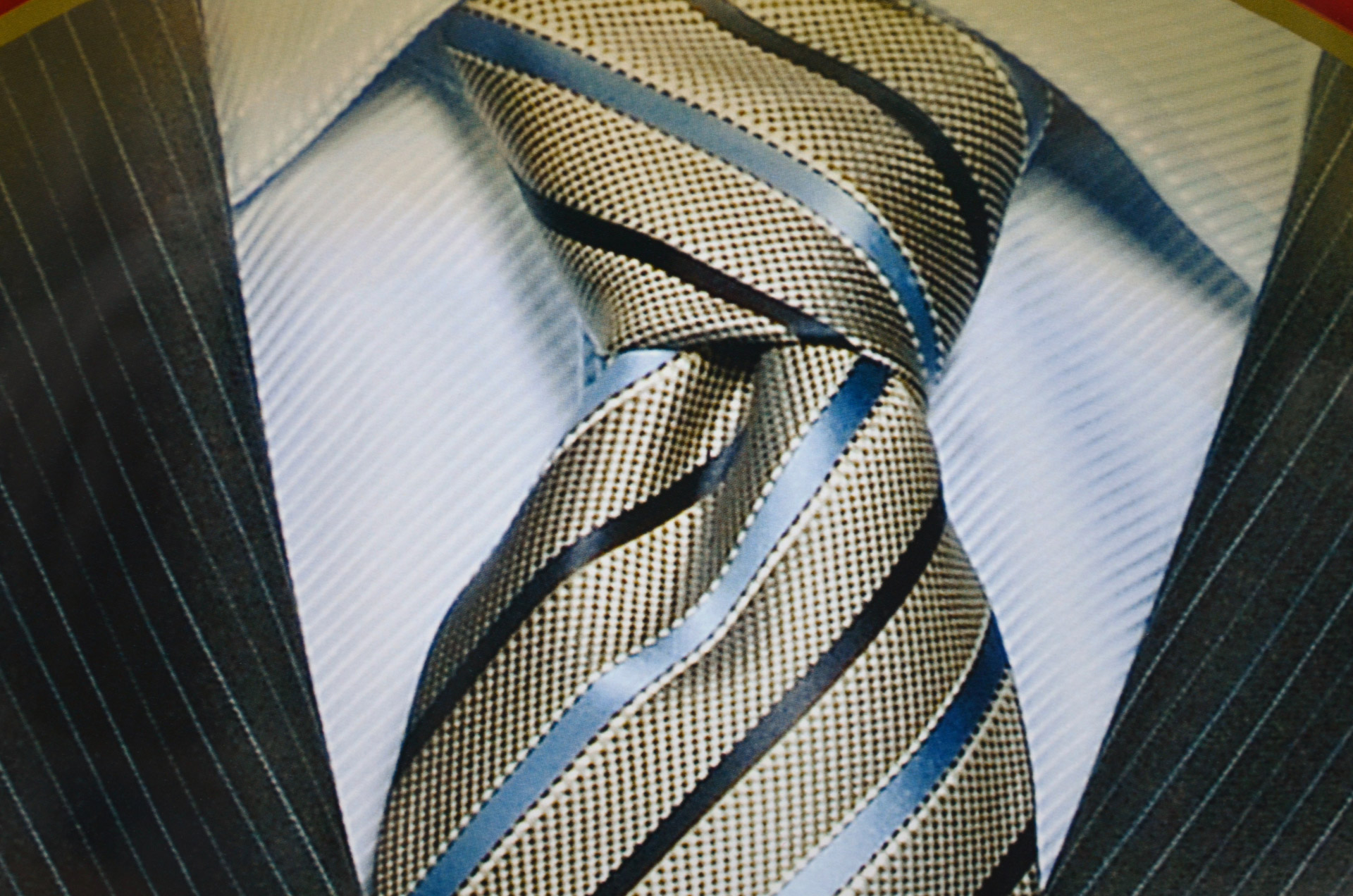 He’ll spend his weekends dressed in ripped jeans and painfully terrible lumberjack shirts. During the weekday evenings he’ll exit his suit after work with utmost speed in order to lounge around in hideous velour pyjamas. You’ve seen nothing, until you’ve seen a velour-wearing Spaniard.

But looking at his bursting closets—yes, plural—you would think my fiancé is some kind of sartorialist.

He isn’t really. He loathes shopping and groans terribly at clothing that isn’t baggy and worn soft with age. He just hates to get rid of anything. There is always that lingering question: “What if I NEED it at some point?”

He is also a creature of habit, which means that he wears the same three suits, ten shirts, and five ties in rotation, never veering away from them.

It started to drive me insane, therefore, that his wardrobe had no fewer than ten suits, and his shirt closet had about fifty dress shirts hanging in it. His tie rack had about twenty ties—some of them so interestingly coloured and patterned that I just about had a seizure every time I saw them.

Really: if you’re going to have that much clothing, at least wear it all and at least let it be beautiful.There was no excuse for about three quarters of what he insisted on hanging on to so, a few weeks ago, I snapped.

The temptation to blow torch everything was intense, but I decided to veer on the side of diplomacy.

Invading his apartment with a massive garbage bag, I told him on no uncertain terms, that it was time to detach and purge. He started to voice something that might have been protest, but my death glare silenced him, and we set to work.

About an hour later, the bag was full with five suits, ten shirts, and a few of the more trying ties. We were glowing with accomplishment, and continued our virtuous streak by deciding to drop the clothing off, later in the week, at a homeless shelter I had heard many good things about.

It was the perfect place. There, they not only feed and house the men who come by, but also provide them with job counselling and try to obtain work placements for them. They would need suits for that, right?

We high-fived over the bursting bag of clothing, congratulating each other on such a great start to the Advent season, and went out for a celebratory dinner.

Look at us! Tidy, organized, and generous!

A few days later, on my way to meet someone, I happened to walk by the shelter. It occurred to me that I had better check to make sure they were actually accepting donations. So, I backtracked and stood in front of the main entrance, but was suddenly too petrified to go in. It was the lunch hour, so men pushed past me, eager for food, and as they did I got whiffs of alcohol and sweat and the street.

A few men standing near the entrance looked at me curiously, and a couple even shouted out friendly greetings.

I would have run away, except that I saw a door off to the side for the administrators of the shelter. Aha! Surely I could find someone to talk to and escape my trying situation there.

My ring was answered by a gentle older man, and I launched right in: “I just made my fiancé clean out his closets and I have a bunch of stuff to get rid of. Quite a few suits and dress shirts and some ties. Do you accept clothing donations?”

He paused. And gave me one of those looks you give to people who have no grasp of reality.

“Well … we don’t turn away anything. To be honest, though, what use do these men have for suits? We need underwear for them, and warm sweaters, and thick socks and jeans. They aren’t looking for the kind of jobs which would require a suit.”

I did a mental head slap. I probably could have figured that out if I had thought about it in any real way. I apologized for bothering him, he thanked me for my interest, and I hurried away through the crowd of—by this time—intensely curious men.

As I walked on down the street, I was overwhelmed with an intense feeling of guilt. I had that lump in the pit of my stomach that you get when you know you could have done better.

I had been so impressed, not only with my organizational and purging skills, but also with my generosity towards the less fortunate, that I hadn’t really stopped to think about whether or not what I was doing was actually generous.

If I hadn’t been blinded by my own lovely efforts in service of humanity, I might have realized that whenever I had passed by that shelter before, I had seen men holding hard hats and wearing safety vests—they weren’t carrying brief cases and wearing suits. I would have realized that as fall moves into winter in London, the damp really hits you and it’s difficult to feel warm. If you’re spending a lot of time outside, socks and sweaters are a necessity.

And most of all, if I hadn’t been so distracted by my desire to complete my generous act with the least amount of discomfort to myself, I might have realized that saying hi or even meeting the eyes of the men waiting for their lunch might have been a truly generous thing to do. How truly diminishing it must be to see that someone is uncomfortable and embarrassed by your presence.

Generosity isn’t about me. It’s not about what I want to give, or what makes me feel good.

It’s about you: What can I do for you? Ultimately, generosity takes courage because it risks making you uncomfortable. What the other person needs, might be something you really, really don’t want to give.

Generosity might mean that, instead of giving him five suits, ten shirts, and some really ugly ties, you ignore the smell, look past the dirt, swallow your discomfort, and simply meet the eyes of someone who is used to being overlooked.