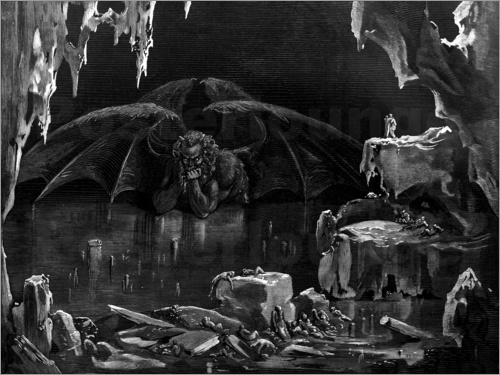 So, what of hell? As you may have heard, and on which I wrote a few days ago, Pope Francis has allegedly (through the perhaps hazy recollection of Eugenio Scalfari after an untranscribed interview) denied that souls spend an eternity in ‘hell’, but are rather annihilated, cast into oblivion and cease to exist.

We know not whether the Pope actually said any such thing, but there has been only a rather ambiguous clarification from the Vatican (that it was a private conversation, with no transcript, and so on). No one has come out and reaffirmed in clear terms the truth of the existence and the eternity of that state our Tradition calls ‘hell’. Like the Amoris Laetitia debacle, there is a lot of strange silence. We are living in interesting times, where we must keep our wits about us.

So here are my wits: Hell is real.

Yet, there is also something ‘unreal’ about it. Christ Himself describes ‘hades’ as the ’loss of eternal life’, a place of ‘wailing and gnashing of teeth’, yes, but also ‘eternal death’.

Behind this allegorical language, the defining aspect of hell is what the Church calls the poena damni, the punishment of the loss of heaven and the beatific vision. As the Catechism puts it, this state of definitive self-exclusion from communion with God and the blessed is called “hell.” (par. 1033). Hell is only hell because heaven is heaven, for only God can fulfill the infinite desires of the human heart, and hell may be described as as state of eternal ‘unfulfilment’.

Does ‘eternal death’ imply that such tragic souls ‘cease to exist’?

No, for Christ emphasizes more than once the eternity of hell, that persons therein continue to exist indefinitely, and, more to the point, as Saint Thomas says, they want to do so. The desire for non-existence is unnatural. God would bring no soul He has created to nothing, but rather allows such persons to follow the path they have chosen, by their own liberum arbitrium, their freedom of choice.

Saint Philip Neri said that in this life there is only heaven and hell, for each of us, soon after we reach the age of reason, chooses one or the other as our final end: The ‘master of our affections’ is either God or mammon, and guides all that we do. Those in a state of grace live for God, and for all their travails, even their daily faults and failings, are at a deep level already ‘blessed’; while those in mortal sin, with something not-God as their final end, for all their apparent pleasure, are already ‘damned’.

The state of our conscience, and our lives, signifies that deep choice for our final ends: life or death, freedom or slavery, truth or falsity, God or Satan.

Although each considers the other ‘unhappy’, only one of them is true in their assessment, and it’s not those in mortal sin. Each will continue in following what he has chosen in this life for eternity, and at the end of time, rise unto the resurrection of life, or of corruption and death.

So what of those who die in such a tragic state? Our faith is quite clear, that they enter the state of hell, the loss of the beatific vision.

Yet we might believe, within the limits of orthodoxy, that perhaps Christ in His mercy allows such souls to have ‘less life’, less awareness of the choice they have made, or not made, as the case may be. He may well mitigate what suffering they do deserve, by the refreshing of His mercy, which triumphs over His justice, something we may ponder on this Divine Mercy Sunday.

What we cannot believe, and maintain Catholic orthodoxy, is that such souls just puff out of existence like some vapour. That would, in what might seem an ironic way, be contrary to the goodness and mercy of God, Who loves all that He has made, even if they choose a path that makes them far less happy and fulfilled than they might have been.

God wants all souls to love Him, spend eternity in His presence, and delights in the death of no one; but as much as the wooer may woo, and the hound of heaven chase us through the arches and byways of this life, for love to be love, it must be chosen, received, accepted, and the beloved must, even if it be at the last moment, consent.

So choose life, then, that you and your descendants may live.