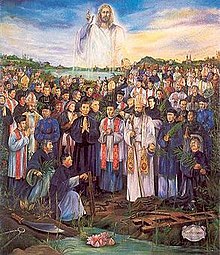 On this memorial of the Martyrs of Vietnam, we commemorate today a whole panoply of white-robed witnesses, Christians, bishops, priests, Franciscans, Dominicans, lay men, women and children, who were put to death in the most horrific of ways in the series of persecutions in that troubled country in the 17th to 19th centuries. There were thousands – some say up to 300,000 – who offered their lives for the Faith, 117 of whom have been officially canonized by Pope John Paul II in 1988. Amongst them were the priests Andrew-Dung Lac and Théophane Vénard , the latter inspiring the vocation of a young French girl, Therese of Lisieux. As a Carmelite, she offered her own life for their far-off labours, and has been declared patroness of the missions, even though she spent almost all of her brief 24 years in a convent.

As Theophane wrote to his family back home in France, not long before his own martyrdom, words which spoke to the heart of the idealistic Therese:

We are all flowers planted on this earth, which God plucks in His own good time: some a little sooner, some a little later . . . Father and son may we meet in Paradise. I, poor little moth, go first. Adieu

The accounts of missionary work in the Church provides a telling window into what things were like before the arrival of Christ and His salvific truth – far from an Edenic paradise. True enough, there is always a certain nobility in every culture, even the most pagan, for Man, even far distant from Christ, never loses his dignity, nor his awareness of the most basic principles of the moral law.  But in a culture without Christ, there is also much that is, quite frankly, deeply evil, one manifestation of which is bringing the art of torture and execution to a whole new depth. The accounts of the martyrs of Japan were bad enough, displayed in the novel and film Silence, but in Vietnam the martyrs suffered things almost beyond imagining. You may have heard the phrase ‘death by a thousand cuts’, which we use metaphorically (as in, the incremental and inexorable tax increases); but this was all too real in many of these victims, slowly sliced to death before the eyes of on-lookers.

This did not trouble the martyrs, deep in their spirit. As Father Vénard was led to his martyrdom, the executioner asked the priest what he would give for his death to be swift. Théophane replied calmly, ‘the longer it lasts, the better it will be‘.

But we need not belabour the point, for one with eyes fixed on heaven, bodily torment is of little account, and fear transformed by love, a point to ponder in our own troubled days.  As one of  the martyrs, Paul Le-Bao-Tinh, put it in today’s Office of Readings:

But as he goes on to conclude, with hope and even some level of interior happiness which only the fullness of the Catholic Faith can offer:

In the midst of these torments, which usually terrify others, I am, by the grace of God, full of joy and gladness, because I am not alone – Christ is with me.

Vietnam, like China, North Korea and Cambodia, fell into Communism soon after the Second World War, which the tragic war in the Sixties could not – or did not – prevent. We must pray for their people, as their leaders begin to realize the economic, and spiritual, futility of Marx’ materialistic ideology, and see that only with a transcendent vision of the human person can nations flourish.

In the midst of our own troubles, storms and even persecutions, we should keep in mind with these white-robed army of martyrs, if Christ be with us, who can be against? Paradise awaits, and we must but finish the pilgrimage with our Saviour, wherever it may lead.