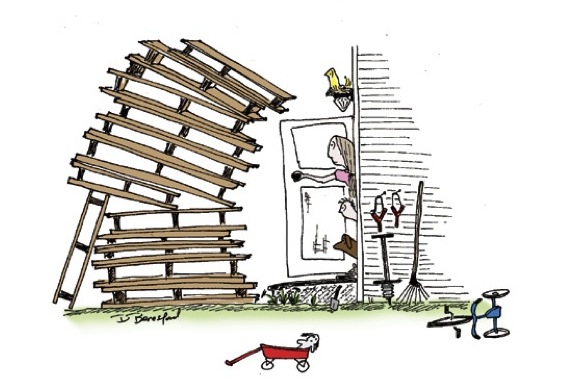 Heating a house with skids has always seemed like a good idea to me, since these are free for the asking at almost every lumber yard or warehouse. Often they are made from some poor grade of maple or oak, but I once built a crib out of mahogany from a skid that had held bags of cement. A few (more than a few?) years ago, a friend of mine was in a similar position to exercise thrift. Allan and his wife Wendy had just had their fourth child. They were renting an old Victorian home in a soon-to-be-fashionable neighbourhood. Allan had a new teaching job that fall and, like us, he was always ready for a good deal. Since I drove a truck for a brick and coal yard in town, I figured I could work out a deal on some of the hardwood skids that were being piled behind the bricks so I called round at Allan’s house.

“Allan, I was cleaning up at work, and the boss said I might be able to get you some skids; do you want any?” I asked.

“How many do you think you’ll need?”

“If they’re hardwood, as many as you can get for me,” he answered, warming up to the idea. “You can pile them in the backyard. There is a laneway back there that comes from the street.”

“Leave it to me, and tell Wendy to be ready with some coffee.”

“Kenny,” I said at work the next morning to the yard foreman, “You know those old skids piled up behind the bricks? Can I drop some off at a friend’s house? They are renting and just had their fourth kid and are kind of finding money tight. It would be a real favour to them, and it is not out of the way.”

“Where is their house?” Kenny asked, and I told him. “Do you think it will really help them?”

“Then you just leave this to me, Davy,” said Kenny, “I’ll bring them some skids myself in the little Ford. You will be too busy doing the out-of-town run today. We have a backlog of orders going out to Cottesloe.”

I checked my load. I would be gone for the whole day by the looks of it.

When I got back at the end of the day, Sam came across the gravel to chat.

“I took some skids to your friend’s house today,” said Sam with a smile. “They have a nice place.” He turned and walked away chuckling.

I pondered his words as I biked home. My wife Theresa met me at the door. “What in the world were you thinking? Have you gone mad? Do you want Wendy and Allan never to talk to us again? Is that your plan? You get over there right now and apologize—how could you be so stupid?”

I hopped back on my bike and went over to see what was going on. As I started knocking Allan opened the front door.

“Hey Allan, did the skids come?” I asked cheerfully.

“Follow me,” said Allan quietly, walking as if he was at a wake. We went through the house, which was seemed draped in an unnatural silence, and went out to the back porch. There I saw a mountain of skids, about twelve feet high and covering every bit of his backyard. I have never seen anything like it.

“They started coming at 7:30 this morning. They woke Wendy and the baby up,” explained Allan. “Dump truck after dump truck came. Wendy begged them to stop, but they just waved and kept coming. She started crying when they dumped a load on the flower garden and the swing set. She is upstairs now; I hope she is sleeping. Her parents are looking after the children for us tonight. She tried to reach me at work, but I was in class and I didn’t get the message. The neighbours began phoning here about lunchtime and kept calling all afternoon. Some of them said they had complained to City Hall. I have been up and down the whole street apologizing since I came home. I kind of smeared your name a bit to them all, which helped calm them down. Oh, and Wendy say she hates you, by the way.”

“Ah well. Thanks anyway. You did say you were bringing some today. I suppose you can’t help it,” sighed Allan. “Just one thing. Did you have this in mind when we talked yesterday? I’m not mad. I’m trying to understand how your mind works. I should have foreseen this—really—but I didn’t think that even you … I didn’t see how even you could … I should have known. Live and learn,” said Allan philosophically.

“I can help cut them up if you like,” I offered.