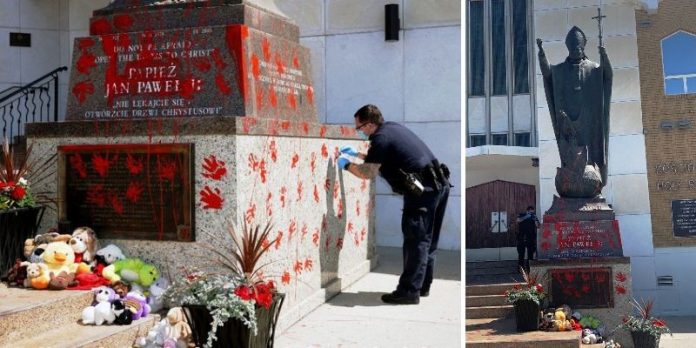 Good Queen Vic’s at the bottom of the sea

Well, where else should she rather be?

We are witnessing a swath of wanton destruction across Canada – from the statue of Queen Victoria de-plinthed, as the saying goes, from her pedestal, surveying the city named after her, chucked into the briny ocean of the harbour which also shares her name. Various other historical figures, from John A. MacDonald to Queen Elizabeth have also been toppled or defaced, deemed by our woke generation, racist, colonialist, too white, too straight, or too Christian.

More troubling – as if this is not troubling enough – is the torching and desecration of churches across this Dominion, most of them Catholic. At last count it was up around 27, but that may be much higher by the time you read this.

We should put this into historical context, for there have been various outbreaks of such iconoclasm – literally, the ‘smashing of images’ from the beginning of the Church’s history. One of the earliest carried out by a horde of barbarians known as the Vandals, who in their path of ruin and pillage through Spain and into Roman Africa, gave their name to random defilement of what is good and beautiful. As the late, great Jesuit Father Paul Mankowski put it, in a brilliant essay (all of his are so) on analogous academic vandalism:

The vandal’s hatred is for the intact, the unstained, the integral; his delight is to chip the nose off the perfect statue, to soil the white wall with graffiti, to shatter the last unbroken window. His destruction is a record not only of malice but of conquest; as a dog is said to foul trees and lampposts as a way of marking territorial boundaries, so the vandal uglifies the yet-undefiled in order to chart the extent of his incursion into the world of order and decorum.

The motives for such iconoclasts through the ages were complex, perhaps even partly unknown even to them: Following the Vandals, we had the Muslims in the 7th century, continuing almost unabated to the present day); the Byzantines under Emperor Leo III, the Isaurian in the 8th century; the Norsemen and Vikings wreaking havoc on the monasteries and villages of Ireland and England beginning in the 11th century; then the Protestants in the 16th and 17th centuries, with every single monastery and convent was dissolved in England, turned into manor homes for courtiers of the Tudors. Most recently, we had the strange iconoclasm after the Second Vatican Council, churches whitewashed and denuded, sanctuaries destroyed, high altars reduced to rubble.

We will never know how much of the religious art and statuary, documents, writings, even the sacred vessels, was lost, ruined, destroyed.

So, here we go again, and what is old is new again, this time anything and anyone deemed ‘Christian, colonial, racist’, or in any way not woke enough, cast into oblivion. The response of officialdom has been either supportive (witness the head of the B.C. Civil Liberties Union tweeting ‘Burn it All Down!’), to the Prime Minister’s tepid response; to the police standing around while rioters and wreckers run amok. Even the Church – that is, the hierarchy, from the Pope on down – have said almost nothing. Where is the outrage, the condemnation, the standing athwart impending chaos?

What gives? There are, of course, blind emotions at work, anger, fear, hatred, with the consequent indiscriminate destruction of the original barbarians. But behind that, what do these new vandals want?

Perhaps the same as the old vandals: A razing of the past, to suit the zeitgeist of the present. It is the driving force of every ideology, unhinged from tradition, that ‘we’ – the woke of the present enlightened era – can and will always do things ‘better’. If the past does not fit in with this, well, then, like the pigs in Animal Farm, they must re-write history, or obliterate it, and use the people’s ignorance and propaganda to convince those of the present, especially the young and impressionable, that the past is, or should have been, whatever they say it was.

There are at least two problems with this: First, it’s impossible. Smash what monuments they want, but history is what it was, and cannot be wiped out. The present would not be without the past, and is simply that past as fulfilled before our eyes.

But, second, at a moral level, there is a sense that we should accept the past, and the people in it, warts and all, with gratitude, for it is how God willed to manifest His providence, leading all things, and persons, to their final end. That includes not only our civilizational and cultural traditions, but also our families, our parents, grandparents, ancestors, and even our own lives, all of them with the good and the bad, the wheat and tares mixed together.

Only God can sift and separate them, in that merciful judgement at the end of time. We are who we were, and in that memory, we recall and honour the good, while discerning and learning from the evil. Je me souviens, as the motto of Quebec has (had?) it – I remember.

Even if we cannot destroy the past, we can forget it, but in doing so, we will only ruin the present and, as a consequence, the future. As I quoted the other day, those ignorant of the history are doomed to repeat it. In the world of these neo-Vandals, one wonders where forgiveness and understanding have gone, of persons and the eras and cultures and milieux in which they lived. Do they not realize that history will judge those of the present, perhaps more harshly than they now judge those of the past?

‘Satan’ in Hebrew is ‘the Accuser’, and it is his tactic to find something, anything, with which to condemn. God is the great ‘Forgiver’, and will always seek some basis, however small, to forgive. The one makes us remember only the evil, the other, only the good (and as Pope Benedict points out in Spe Salvi, in most people, the latter almost always far outweighs the former) The one seeks to hate, and smash and destroy, the other, to love, heal and build up. And, while we’re at it, to build upon what has gone before.

History may be seen as a pilgrimage to hell or heaven, hinging on how we see it, and live it. The choice is ours.