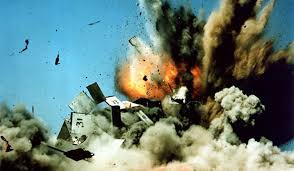 There is not much profit,  in more ways than one, in commenting on international affairs, but that does not stop so many, myself included, from trying. (To comment, that is, not so much to profit). I am surprised that most of the feedback on Trump’s ordering Tomahawk missiles to destroy a Syrian air base (at least in the pages of our own homegrown National Post).  This attack was in apparent retaliation for an alleged gassing by Basha al-Assad, apparently of his own citizens, including women and children (that is, insofar as Syria can still be said to have ‘citizens’, for there is not much civility, nor cities, left).

As you may have noticed, there is a lot of supposition in that preceding sentence, as there were when in many of the statements of Trump’s sometime predecessor, George W. Bush, who ordered a ‘shock and awe’ attack on Iraq back in 2002, in retaliation for the country, or at least Saddam Hussein, being in some way responsible for, or complicit with, the attacks on the World Trade Centre in Semptember of the previous year. Of course, we know, and knew, that it was Osama Bin-Laden who was behind the attacks, a Saudi citizen, as were almost all of the plane hijackers, and that Osama was hiding out in Afghanistan somewhere (another whole story).

But even if Sadam Hussein had little or nothing to do with 9-11, he was, so it goes, a ‘bad guy’, an autocrat and despot,  and America had a God-given duty to make the world ‘safe for democracy’.

It is certainly at least a very debatable point whether the world is any ‘safer for democracy’ now than it was back then.

There are at least two problems with Trump’s Tomahawk attack, besides all the accidental fallout, no pun intended:

Any act of war contemplated by the President requires congressional support.  Given that destroying an airbase in a sovereign nation may be considered such an ‘act of war’ (would it not be considered so on American territory?), this support from the democratic representatives of the United States was neither solicited, nor offered.

At a deeper, moral level, the only just war is a defensive war, since war itself is an extension of the principle of self-defense, when there is no other way to ensure the survival and well-being of the nation being attacked.  In other words, war should be a final, and tragic, last resort.  And I, for one, wonder, in what way is the survival or well-being of American citizens contingent upon what happens in Syria?

This is not to say that what is ‘happening in Syria’, is not evil, nor defensible. It’s just that, why is it America’s fight?  I heard an interview with Assad once, and found him an amicable person, agreeing with many of his statements. He did not come across as a ‘madman’, nor even as a despot.  Of course, people can hide what they truly are, and I know not his secrect, and not-so-secret, crimes. What is portrayed and alleged in the media may or may not be true, for it is a fallible formal object of trust. But even if Assad is a ‘worse’ man than Hussein was (requiescat in pace, and I hope he found peace in his final moments), is the United States the world’s universal policeman, arbitrer of justice throughout the planet, like the mythical Superman?  Does technological and military superiority, at least so far, bestow that right upon it?

This is to say nothing of what this will do to relations with Russia and Iran, also not the ‘best of guys’, but, then, who on the world stage is? Politics is the art of the possible and the practical, achieving as much good, and avoiding as much evil, as is requisite in the circumstances.

And Mark Steyn is correct that the U.S. and Trump had better have an end-game to all of this, for headless states in the Middle East, upon the principle that nature abhors a vacuum, tend to attract the less-savoury elements of the Islamic world.  In other words, Syria would become another Iraq and Libya, with the metastasis of ISIS, radicals, anarachists, and other opportunists of the most amoral variety.  Even more chaos, bloodshed and mayhem will reign. There are often seven devils waiting when one is driven out, unless a stable and lasting regime, built on justice and virtue, with a  powerful military and police presence to ensure compliance, along with enough decent people to put what we know as ‘civilization’ back into effect..

And, from what many can see, there is very little justice, civilization and virtue going around, on any side.