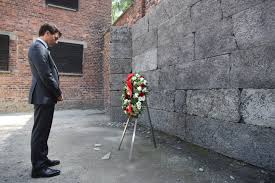 Our poseur Prime Minister, who loves backdrops, as do most politicians I suppose, fresh from his front-and-centre presence at the licentious ‘Gay Pride’ Parade, just visited what remains of the labour/death camps at Auschwitz.  A curious juxtaposition, one might think.

I was at Auschwitz last May, and you may peruse my own thoughts if you are so inclined, but here is what Justin Trudeau, described in the National Post as “sombre and visibly moved”, while wiping away tears, penned in a memorial book on the site:

Fine words, one might think, but Trudeau seems ignorant of the fact that the Nazi death machine had its origins in Germany’s own fully legal-and-approved euthanasia program, run by psychiatrists and high-level government officials, to put to death mercifully those who could most benefit from such a release from apparently tragic and pointless suffering, as I also recently described.  Trudeau sees not the irony that he himself just recently spearheaded the legislation to permit similar euthanasia death laws in Canada, and, lest we forget, his support for abortion is vocal and unflinching.

The fundamental evil of the Nazis was not specifically the killing of the Jews, (for, although this is the greatest evil for which they are remembered, they did not start there, and they extended their murderous rampage to many others), but rather the denial of human dignity to particular kinds of people, not least the Jewish people. As soon as the State can determine who has the right to life, and who does not, we are already in the realm of what has unfortunately been linked with ‘Nazism’, the one go-to entity that embodies evil. But such evil is of the essence of any number of God-less authoritarian regimes, from Maoist China to Stalinist Russia, who killed far more than Hitler and his deranged henchmen.

And, we must ask, how are we much different, in denying the full rights and the dignity of humanity to the unborn, and now to the sick, frail and elderly?

Trudeau and his fellow-travelers are the very ones who are allowing ‘such darkness to prevail’, although they couch their words in fine-sounding slogans of human rights and dignity, of Canadian ‘values’ and compassion. Yet their euphemisms are largely empty, as they inexorably promote and legislate the culture of death.

We should recall the words  of the great John Paul II in Evangelium Vitae which, sadly, I do not think the Prime Minister has read:

It is therefore urgently necessary, for the future of society and the development of a sound democracy, to rediscover those essential and innate human and moral values which flow from the very truth of the human being and express and safeguard the dignity of the person: values which no individual, no majority and no State can ever create, modify or destroy, but must only acknowledge, respect and promote.