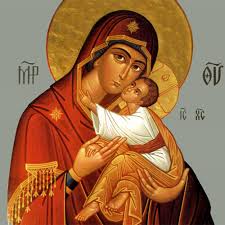 I will often ask my students in class whether Christ was a human person.  The answer may seem straightforward:  Of course He was (or is that is)?

But the correct response is that He was not.  This may at first glance seem counter-intuitive, but, in fact, is a central truth of our faith, without which there would be no real Incarnation.  To put this into a Christmas perspective, which was in fact was how the question was first raised in the early 5th century:  Who was born of the Virgin Mary on that glorious day in Bethlehem two millennia ago?

The Patriarch of Constantinople at the time this question was debated, whose name was Nestorius (I often joke that heretics have heretical-sounding names, but what came first, the heresy or the name?), well, anyway, Nestorius claimed that Mary did not in fact give birth to God, but rather to a human person, namely, Christ, who was somehow united to God.  Therefore, the Virgin did not deserve the traditional title of ‘Theotokos‘, or God-bearer, but rather the more lowly title, if you will, of ‘Christotokos‘, or bearer of Christ.  For how, in heaven’s name, could the eternal and infinite God be born of a woman?

This raised the deeply metaphysical question of Who is Christ?  Who was born, walked the earth, preached, healed, counselled, forgave sins, suffered and died for us?  Who indeed was the Messiah?  (I write listening to the strains of Handel’s incomparable oratorio in the background).

The question boiled down to whether God truly became Man.  If so, He (Christ) had to unite Himself in some way with our humanity, and that union had to occur somewhere within our human nature.  This question troubled the Church for centuries, always in the background.  The truth was there, unpacked within the revelation given to us by Christ Himself, but it was the task of the Church, and her Magisterium, to put this truth into philosophical language that we could, at least to some degree, understand.

The Church knew that the Incarnation had to be ‘real’, and not just an illusion, some kind of theophany of God just appearing as a man, or in some other guise (as we see in the Old Testament, in the burning bush, the visit to Abraham and Sarah, the mysterious figure wrestling with Jacob, and so on).

If real, then how?  The Church Fathers also knew that Christ had to be both truly human, yet also truly God.  He had a real human body, a real human mind, and, yes, even a human soul.  But, as they reasoned upon the data of revelation, He was not and could not be a human person.

Ponder:  If Christ were a human person, then how did God become Man?  That would mean there were two beings, two persons: one in heaven, and another on earth.  How were they united?  Nestorius had no sufficient answer to this question.  He mentioned vaguely  that there was a ‘moral union’ between the Second Person of the Trinity, Christ ‘as God’, and Christ ‘as man’.  But how is that different from any of our unions with God?  Are not all human persons in a state of grace united with God?  The Church realized that tolerating the Nestorian heresy would dissolve the truth of the Incarnation in the minds of the faithful.

No, there had to be a true union between God and Man.  Yet where did the union occur?  The Church decreed at the Ecumenical Council of Ephesus in 431, in response to Nestorius, that the union occurred in the divine hypostasis, or, in other words, the divine Person.  That is, Christ assumed into His divine Personhood all that it meant to be human, except being a human individual, a human person.  That is the only thing ‘missing’ in the Incarnation, insofar as Christ, the Second Person of the Trinity, assumed into His own eternal Person what would have been the human person of the Man-Christ.

Yet, as then-Cardinal Joseph Ratzinger wrote in a 1991 essay in Communio, the human personhood was not really missing in Christ, for by the Incarnation, God has raised all of human nature, at least in potency, to the divine level.  As Ratzinger frames the question so clearly:

Person is the true apex of human existence.  It is missing in Jesus. Therefore the entirety of human reality is not present in him…The assumption that some defect was present here was the point of departure of various distortions and aberrations.

After which he lists the numerous heresies concerning the Incarnation, many denying some aspect of Christ’s true humanity, his soul, his human will, his human nature.

Eventually, the Church determined at the Council of Chalcedon in 451 under the tutelage of Pope Saint Leo I, that Christ is one divine Person in two complete natures, divine and human.  But as Ratzinger reasons, the fact that Christ is not a ‘human person’ does not diminish His humanity, but rather elevates it.  As he says:

“What is disclosed in Christ, whom faith certainly presents as unique, is not only a speculative exception; what is disclosed in truth is what the riddle of the human person really intends.  Scripture emphasizes this point by calling Christ the last Adam, or the “second Adam”.  It therefore characterizes him as the true fulfillment of the idea of the human person…the fulfillment of the entire human being.”

And a little later, concludes:

“In Christ, in the man who is completely with God, human existence is not canceled, but comes to its highest possibility, which consists in transcending itself into the absolute and in the integration of its own relativity into the absoluteness of divine love.”

Or, in other words:

“Christ is the directional arrow, as it were, that indicates what being human tends toward”

This is the ‘arrow’ of our true purpose and end that begins, at least in a visible, public way, on Christmas morning, when the Christ-child, fully God and fully Man, was born of the Virgin Mary in a miraculous manner, having been conceived in her womb, also as God, on the day of the Annunciation nine months before.  As the great Pope John Paul II declared in 1979 in his first encyclical, Redemptor Hominis, in a passage that bears quoting in full, as we prepare for Christ’s Advent (yes, I know the great mind of JP II can be heavy and deep reading, but he is worth it):

Christ, the Redeemer of the world, is the one who penetrated in a unique unrepeatable way into the mystery of man and entered his “heart”. Rightly therefore does the Second Vatican Council teach: “The truth is that only in the mystery of the Incarnate Word does the mystery of man take on light. For Adam, the first man, was a type of him who was to come (Rom 5:14), Christ the Lord. Christ the new Adam, in the very revelation of the mystery of the Father and of his love, fully reveals man to himself and brings to light his most high calling”. And the Council continues: “He who is the ‘image of the invisible God’ (Col 1:15), is himself the perfect man who has restored in the children of Adam that likeness to God which had been disfigured ever since the first sin. Human nature, by the very fact that it was assumed, not absorbed, in him, has been raised in us also to a dignity beyond compare. For, by his Incarnation, he, the son of God, in a certain way united himself with each man. He worked with human hands, he thought with a human mind. He acted with a human will, and with a human heart he loved. Born of the Virgin Mary, he has truly been made one of us, like to us in all things except sin”, he, the Redeemer of man.

Every human now, in some way, at least potentially, is united to God, by the elevation of our common, shared human nature by the Son of God.  In truth, we too are no longer just ‘human’ persons:  Our perfection now consists in also becoming ‘sons of God’, and living eternal life in the Trinitarian beatific vision.  Christmas reveals that we have all now, in a real sense, become God-like.  Whether we open ourselves to that destiny is another question, which is the real  tragedy of sin:  To reject that gift God has offered us through His Incarnation and redemption.

The Council at Ephesus condemned Nestorius’ heresy, rightly so, and proclaimed:

If anyone will not confess that the Emmanuel is very God, and that therefore the Holy Virgin is the Mother of God (Θεοτόκος), inasmuch as in the flesh she bore the Word of God made flesh [as it is written, The Word was made flesh] let him be anathema.

There was great rejoicing in the streets of Constantinople and throughout the Empire, now that Mary was truly and forever proclaimed Theotokos, the Mother of God, and therefore we, truly, are all God’s children, in a way more real than we could ever have imagined.

So, as we partake of the incarnational festivities at Christmas of shared food and drink, let us also take this deep and mysterious truth of the Incarnation as part of our own rejoicing, as we welcome and adore the God-become-Man in that lowly manger bed so many years ago, who made all creation holy and good.