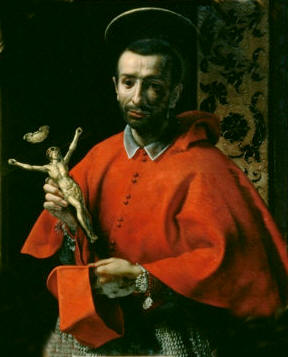 The memorial of Saint Charles Borromeo (1538-1584) commemorates one of the great pillars – along with Saint Robert Bellarmine, Philip Neri and countless others – of what is unfortunately known as the ‘Counter Reformation’, which is really nothing other than the Catholic Church’s vigorous response – lately grown complacent, complaisant and enervated in the luxury and worldliness of the renaissance – to the Protestant’s own reaction against this enervation, but which also included their throwing out much of Tradition and truth.

Charles in his relatively brief life filled more than most men in three lives. He was one of the rather rare good fruits of nepotism, being none other than the Pope’s nephew, from a noble family lineage.  Said Pontiff, Pius IV, recognizing the qualities in the young Charles, then but 22 years old, appointed him a cardinal in 1560, and this back in the days when that office went along with much political power, riches, largesse, and, if one so desired, a life of ease and comfort.

Numerous other nepotistic ‘cardinal-nephews’ had chosen to immerse themselves what the world might offer, but Charles chose the precise opposite, dedicating himself to his vocation with an extraordinary zeal to the true Reformation of the Church of Christ.  He promoted austerity and discipline amongst the clergy, as well as piety and learning, leading always by example.  And it was Cardinal Borromeo who, almost by sheer force of his own will, intellect and holiness, brought the third session of the Council of Trent (1545 – 1563) to an admirable and glorious conclusion, which clarified and solidified the Church’s doctrine and practice.

Charles was ordained a priest in 1563 (cardinals up until quite recently could be, and sometime were, laymen), and was appointed Archbishop of Milan a year later, in 1564.  His reforms there met with much resistance, even an attempt on his life, but he again led by his own saintly example, putting into practical effect the reforms called for by the recently completed Tridentine Council.  By his diplomacy and numerous writings, he influenced the Church in this tumultuous time, as well as world affairs, including the troubling state of the Church in England. Edmund Campion, the great Jesuit and future martyr, stayed with Bishop Charles for eight days of prayer and conversation, before his fateful return to England.

His advice to his priests stands in good stead for us all:

Would you like me to teach you how to grow from virtue to virtue and how, if you are already recollected at prayer, you can be even more attentive next time, and so give God more pleasing worship? Listen, and I will tell you. If a tiny spark of God’s love already burns within you, do not expose it to the wind, for it may get blown out. Keep the stove tightly shut so that it will not lose its heat and grow cold. In other words, avoid distractions as well as you can. Stay quiet with God. Do not spend your time in useless chatter.

‘Stay quiet with God‘ is invaluable advice in our technological era of constant noise and distraction, counsel reiterated powerfully and providentially for our own day by another saintly cardinal, Robert Sarah, whose book on the Power of Silence comes highly recommended.

Charles Borromeo was the patron and intercessor of a future bishop who carried his name, Karol Wojtyla (who often invoked the prayers of his predecessor, and himself celebrated this day, for in Polish culture, the focus is on one’s patron saint by name, rather than one’s birthday). Their lives in many ways were parallel, both reformers of the Church in the heady days after a great Council. They lived in different eras, and their outlooks coloured by this (Charles is now criticized for his treatment of ‘heretics’, but Church-State relations were quite different in the 16th century than they are now).

Bishops Wojtyla and Borromeo were both great saints, stalwart and steadfast in their defence and safeguarding of the Church’s salvific truths, clearly, without ambiguity and compromise, who sought the lowest place (young Karol at first desired to be a Carthusian, and we may be thankful that his spiritual director convinced him otherwise).  Both were brought up to the highest, by the grace and providence of God, and we should pray that all of our pastors, bishops and priests imbibe some large share of their spirit of dedication, magnanimity and holiness.