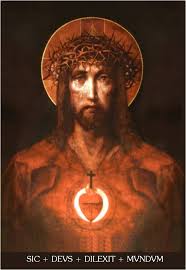 A blessed Solemnity of the Sacred Heart of Jesus, to all our readers, a feast which has its origins in the early Middle Ages, when a renewed emphasis upon Christ’s humanity dawned upon the devotional world, led by saints such as Bernard of Clairvaux and Francis of Assisi, on into the visions devotio moderna of Saint Mechtilde (+1298), Saint Gertrude (+1302) and, most of all, Saint Margaret Mary Alacoque (+1690). A Mass for the feast was instituted by Pope Innocent VI in 1353. Pope Pius IX had made the feast universal in the Church in 1856. A few decades on, prompted by the visions of Sister Mary of the Divine Heart (+1899), Pope Leo XIII consecrated the world to the Sacred Heart on June 9, 1889, which Pope Saint Pius X asked be repeated each year. Then on the hundredth anniversary of the feast in 1956, Pius XII promulgated his encyclical, Haurietis aquas, on the Heart of Christ. Finally, we may see in the devotion of Saint Faustina to the Divine Mercy an extension of the Sacred Heart, that Christ’s mercy is prompted by both His infinite divine and human love for each individual human person, and will be efficacious unless we refuse that mercy.

When we worship the ‘heart’ of Christ we are adoring Him, as He now exists in both a divine and human nature, united by His divine and eternal Person. As Catherine of Siena put it, the humanity of Christ is the bridge between heaven and earth, the access, if you will, to the Father and eternal beatitude with the Trinity.

Today is also the World Day of Prayer for Priests, instituted by Pope Saint John Paul II in 2002, a reminder that Christ came in true human nature, with a human body, flesh and ‘heart’, and all that means, the emotions and affections proper to being a man. Christ could say with the Roman poet Terence, Homo sum, humani nihil a me alienum puto, ‘I am a man, and nothing human is alien to me’, albeit with a bit of a different meaning and emphasis, for Christ knew no sin, and was perfect in mind, body and soul.

The Priesthood, as the Curé D’Ars said, is the love of the heart of Jesus. Even if at times their own human weaknesses obscure that love, the priest is still an alter Christus, and we must pray that they re-discover and live up to their exalted vocation, which is not primarily their work but Christ’s, and God’s.

Again to Saint Jean Vianney (declared the patron of all priests in 2009 by Pope Benedict, inaugurating the year he dedicated to priests), if we really understood the priest on earth, we would die not of fright, but of love. (cf., CCC, #1589).

Trust in God, and in His Christ, and praise Him still.

Most Sacred Heart of Jesus, have mercy on us.