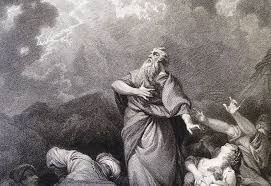 WERE YOU startled by what you heard in the reading of Moses holding back the anger of God? It certainly provides a picture of God different from that which we usually entertain. There God was angry, full of wrath, ready to wipe out the entire Hebrew nation because of their idolatry with the golden calf. And then—even moresurprisingly—he changed his mind when Moses argued him out of it. The meaning of this passage for us Christians is not that God really could be angry or changeable, but the fact that Moses’ powerful prayer is a foreshadowing of the more potent intercession of Jesus who saved, not merely one nation but all of mankind by his great act of expiation and redemption on the cross. I find it intriguing, however, that there are many other biblical texts that portray God with human characteristics. We learn from the book of Job that he has a hand—“Shall we receive good things at the hand of God, and shall we not receive evil?” (1) —and from Genesis that he has feet—for Adam and Even trembled when they heard the “the sound of the Lord walking in the Garden.” (2) He also has eyes, as when Noah “found favour in the eyes of the Lord,” (3) and ears, for he hears the psalmist when “he calls on the Lord.” (4) He must even have a nose, for he smelled the “pleasing odour” when burnt offerings were made. (5) We know, of course, that these statements are all metaphors, which when taken together indicate God’sprovidential care for his people and his involvement in human history.

There is another human trait that we find attributed to God, a trait very consoling to us sinners. I’m thinking of today’s Gospel about the lost sheep or the missing coin. God, it seems, shares with all of us the collector’s need to preserve a perfect set. For is there any one of us who does not know how important, how obsessive it can be to keep a matching collection of objects intact? Suppose, e.g., you have a set of china, say, six or eight complete place settings, each with its dinner plate, bread-and-butter plate and cup and saucer. If one item is broken, you have to replace it. I know a woman who had souvenir tea spoons from nine provinces; she could not rest until she acquired the missing tenth. The same collector’s itch shows itself everywhere—with stamps or beer-parlour coasters, with hockey cards (are they still around?) or autographs. Well, it seems that Our Lord shares this attitude towards those sheep or those coins. In the first place, you must recognize that that flock of sheep was perfect, for one hundred is an ideal number We know that in the Bible, ten indicates completion, as in the ten—not the nine or the eleven—commandments or the ten plagues of Egypt. One hundred, which is ten times ten, is therefore perfection: the set is complete. Hence losing one ruins it, and one lost coin out of ten is equally intolerable. When the shepherd or the woman finds the missing item, he rejoices with his friends and neighbours, thus demonstrating just how satisfying it is to have the integrity of the collection re-established.

Jesus tells us that the parables refer to the reconciliation of sinners. Why, one may ask, is it so important to have them back “in the flock,” so important that their return excites joy among the angels? Well, some clever theologians have presumed to answer that question. They began by noting that the number of angels and saints praising God in must be precisely right. Even one additional voice would be excessive, one fewer, inadequate; for everything in heaven will be exactly as it should be. But, our theologians observed, after the bad angels had fallen and become devils, there were gaps in the heavenly choir. What was to be done? Angels cannot repent, for their mode of action is absolute, at once irrevocably either for or against God. At this point we human beings enter the scene, for we are endowed with intelligence and are capable of activating that intelligence with the love of God. In short, we are the ones who are called upon to compensate for the loss of Satan and his followers by joining the angels and saints.

And so, in a charming bit of imaginative speculation, our Augustine and Anselm saw a glorious destiny for man, who had been lost and was then found by the good shepherd, that is to say, he could be rendered fit for heaven. One must be careful here, for the temptation is to think that God needs us in order to fill the spots vacated by those rebel angels. A moment’s reflection, however, is sufficient to remind us that our praise adds nothing to the glory of God; rather, the beatific vision is of benefit to us, in that it satisfies and perfects all of our most profound human desires and needs—for beauty and truth, for goodness and communion. Is it not consoling to know that that angels, and Our Lord himself, rejoice to see you and me here and now, where, like that lost sheep, we have been sought out and incorporated into the flock?