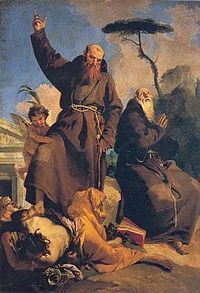 On Sunday 24 April 2022 while we were celebrating Divine Mercy Sunday on that day fell the feast of the brave Capuchin saint St Fidelis von Sigmaringen. Who was this great man of faith?

Markus was born in the German town of Sigmaringen in 1578. In those days Sigmaringen was a small Danube town, located in the Principality of Hohenzollern. His father was called Johann Rey, a rich hotelier from Adler, who would later on be chosen its bürgermeister. Genovefa Rosenberger, his mother, came from Tübingen, a Protestant city. When she married Johann on28 December 1567 Genovefa embraced the Catholic faith. The young Markus or Marx as he was known to his family and friends, was the fifth out of six children within his family. He ended his first schooling in Sigmaringen. In fact, in the testament he himself composed before his religious profession, in 1631, he confided to have been educated in the one, apostolic, Roman, and true faith transmitted to him by his very beloved parents” as well as to have been “educated in good manners, discipline and the fear of God.

After finishing from Sigmaringen Markus furthered his studies in the Jesuit college of Freiburg im Breisgau, in classics and philosophy with distinguished success in 1601. Simultaneously he delved deeper into the studies of Italian and French. Markus  also treasured friendship and music, learning how to play various instruments. As well, in the period between 1601 and 1604 we find Markus studying law. Behind all this academic achievements, Markus’ life suffered huge losses. In 1591 his father died. A year later his mother Genovefa tied the knot again with Gabriel Rieber von Ebingen. Commenting on this marriage it seems that Markus was upset for his mother’s rushed and puzzling marriage.

Just prior to his termination of his studies, precisely in 1604, Markus was sent to both accompany and lead some students who came from rich families. They visited France, Italy, as well as the Low Countries, at the time under Spanish control, to widen the horizon of their human experiences. Markus experienced this journey with the pilgrimage spirit. His behaviour exuded a spiritual way of living everyday life for his friends.

As soon as he returned to Freiburg in 1611 Markus graduated with high marks in both civil and church law in the city of Willingen. His great academic success immediately captured the attention of the public authorities, and Markus was nominated as assessor in the supreme court of Ensisheim, an Austrian metropolis of the time. Moreover, he initiated a legal office, where he championed honesty and defended the poor.  Upon seeing his colleagues who were more intent on filling their pockets with money rather than administering justice, Markus became disillusioned with his legal profession, and started pondering his vocation more deeply. After reading the book on consecrated life by the Jesuit Girolamo Piatti (1591), motivated by the example of his brother Georg who embraced the Capuchin order in 1604 bearing the name of Br Apollonius, Markus chose the Capuchins.

In June 1612 Markus officially presented his request to the Provincial Minister of the Swiss Capuchin Province, Br Alexander von Altdorf, to be accepted in the Order. To see if he really had a vocation the Provincial suggested that Markus be first ordained a priest. He was ordained in September and, once again, made his request to enter the Order. He was ultimately welcomed into the novitiate in Freiburg im Breisgau on 4 October 1612 by Br Angelo Visconti da Milano. He was given the religious name of Fidelis.

Notwithstanding the temptations to return back to the world, Br Fidelis kept focused on his goal to become a Capuchin. In this period of his life he committed himself in writing a series of prayers and meditations which admirably portray his affective and contemplative emphasis present in his spirituality. In the following years we find part of this compilation published in Freiburg under the title Exercitia spiritualia seraphicae devotionis, in 1746 and 1756. Prior to his perpetual profession on October 1613 in his will he gave scholarships for poor young Catholics of the Rey family and other relatives.

Following a year of religious formation at Freiburg, Br Fidelis started four years of theology in Konstanz guided by a friar of Polish origins, Br. Johann Baptist Fromberger. In 1618, at Frauenfeld, Br Fidelis finished these studies. Within the same year he was charged with the ministry of a guardian in Rheinfelden friary. In total conformity with the practice of those years, Br Fidelis was transferred as preacher and guardian to the Feldkirch friary in 1619. In this place Br Fidelis brought back to the Catholic Church a group of evangelical soldiers as well as was helping a woman who was immersed with Lutheran teaching.

Holy obedience called Br Fidelis to be a guardian in Freiburg (Switzerland) in September 1620 although in 1621 we see him returned to Feldkirch. Besides being a guardian Br Fidelis was caring spiritually for soldiers. His solicitude was shown when a pandemic of petechia broke out, Br Fidelis was always at their side, helping them in all possible ways. He accompanied the soldiers to the Grison where he preached Advent in Marienfeld. There he brought back to the Catholic faith the noble Rudolf von Gugelberg from Malans. The story occurred again at the beginning of 1622 at Zizers, where he helped convert Rudolf Andreas de Salis. Br Fidelis’ method of conversion was of approaching the reformation leaders and, after having won them for the faith, would then bring their people back to the Catholic faith. Fidelis supported his counter-reformation activity by writing some apologetics books about the faith. Although these were published we do not have any copy of them so far.

From February and April 1622 we find Br Fidelis working as a missionary in Prättigau thanks to the request by the Apostolic Nuncio in Luzern as well as his provincial minister. Even if politically they were under Austrian rule the Prättigau population was mainly with the heretic Zwingli. The political situation in Prättigau deteriorated by the influence of France, Spain and the Venetian Republic. Archduke Leopold V of Austria had the region in his hands with his army under the command of Luigi de Balidrone. Such an action angered the population so much that a series of violent actions ensued. Meanwhile Br Fidelis kept explaining the Catholic faith by his sermons, disputes and talks, regardless of the fact of opposition and disinterest of the people. Br Fidelis felt that he was being harshly opposed by Zwinglian preachers, and that his martyrdom was around the corner.

Undeterred by this apparent hostility he wrote the so-called Mandate or The Ten Articles of religion. Thanks to this Mandate civil authorities halted protestant worship and exiled its ministers. Moreover, they enforced the attendance for Catholic and feast days Mass all the population of Prättigau.

The reaction to the publication of the Mandate on April 19 was outrageous. On 23 April Br Fidelis celebrated Mass and climbed the pulpit in the church in Grüsch. There he was invited to preach the following day, on Sunday 24, in Seewis im Prättigau. When he started his sermon, which according to a tradition he was explaining the subsequent passage from the Letter to the Ephesians (one Lord, one faith, one baptism, one God and Father of us all, who is above all and through all and in all Eph 4:5-6), the audience’s reaction was simply out of proportion. After being missed by a shot, Br Fidelis ran out of the pulpit, genuflected before the main altar and went out of the church through a side door to return to Grüsch. Passing a few metres he became aware that he was encircled by a group of rebels. After asking him if he would embrace their faith, he on the contrary replied that he went there to help them return to his Catholic faith. One of the rebels struck Capuchin’s head with a sword. Immediately he fell to his knees and prayed: Jesus, Mary. O God come to my aid. Then he was furiously torn apart by pitchforks, hammers and clubs. Such was the end of the formidable protagonist of counter-reformation activity.

The abundance of his charity led him to care for the bodily needs of his neighbours: he gathered all who suffered into his fatherly embrace, and supported a great number of poor people by collecting alms for them from many sources.

He relieved the loneliness of widows and orphans by arranging help for them from powerful men and princes; he assisted prisoners by all the means, physical and spiritual, that were in his power; he was tireless in visiting the sick in order to comfort them, to reconcile them to God, and to prepare them for their last agony.

He was never more fruitful in works of mercy than when the Austrian army, stationed in the Alps, was struck by an epidemic and presented a miserable spectacle of pain and death.

Not only was he ﬁlled with such great charity. Being a man faithful in name and in deed, he was a notable defender of the Catholic faith, which he tirelessly preached. A few days before he sealed his faith with his blood, in his last speech, as though in a will, he spoke of the Catholic faith in these words:

Catholic faith, how stable, how ﬁrm you are, how well‐rooted, how well‐founded on a strong rock. Heaven and earth will pass away, but you can never perish. From the beginning the whole world has spoken against you, but you have triumphed mightily over all.

For this is the Victory which overcomes the world, our faith; this is what has brought the most powerful kings under Christ’s rule, and made peoples the servants of Christ.

What was it that made the holy apostles and martyrs undergo ﬁerce struggles and terrible agonies, if not faith and above all faith in the resurrection?

What is it that has made hermits spurn pleasure, honour and wealth, and live a celibate life in solitude, if not living faith?

What is it that in these days causes true Christians to turn aside from what is easy and pleasant and undergo hardship and labour?

Living faith working through love – this is what leads men to put aside the goods of the present in the hope of those of the future, and to look to the future, rather than to the present.

Lord God, you crowned Saint Fidelis with a martyr’s death, when, filled with your love, he was preaching the faith. Let our lives be rooted in love, so that with him, and by his prayer, we may know the power of Christ’s resurrection. We ask this through our Lord Jesus Christ, your Son, who lives and reigns with you and the Holy Spirit, God, for ever and ever. Amen.