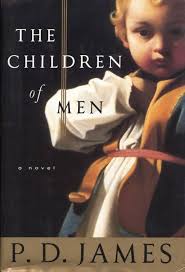 It was somewhat disconcerting to discover that the 1992 novel The Children of Men by mystery writer P.D. James was set in January of 2021, which seemed a long time in the future even a few years ago. The opening paragraph begins on New Year’s Day of that year, which, in the Catholic liturgy, is the solemnity of Mary, Mother of God, with the ‘children of men’ being no more:

Early this morning, 1 January 2021, three minutes after midnight, the last human being to be born on earth was killed in a pub brawl in a suburb of Buenos Aires, aged twenty-five years two months and twelve days. If the first reports are to be believed, Joseph Ricardo died as he had lived. The distinction, if one can call it that, of being the last human whose birth was officially recorded, unrelated as it was to any personal virtue or talent, had always been difficult for him to handle. And now he is dead. The news was given to us here in Britain on the nine o’clock programme of the State Radio Service and I heard it fortuitously…

Twenty years ago, when the world was already half convinced that our species had lost for ever the power to reproduce, the search to find the last-known human birth became a universal obsession, elevated to a matter of national pride, an international contest as ultimately pointless as it was fierce and acrimonious… After months of checking and re-checking, Joseph Ricardo, of mixed race, born illegitimately in a Buenos Aires hospital at two minutes past three Western time on 19 October 1995, had been officially recognized. Once the result was proclaimed, he was left to exploit his celebrity as best he could while the world, as if suddenly aware of the futility of the exercise, turned its attention elsewhere. And now he is dead and I doubt whether any country will be eager to drag the other candidates from oblivion.

I agree with Mark Steyn that the film based on the book, slick and well made well-produced, more or less misses the main point of the prescient novel: the malaise of modern man, his ennui, a global acedia, a spiritual sorrow that saps our soul.

I would add a more Catholic element to Steyn’s comments. James’ novel, unwittingly, signifies the full effect of the contraceptive mentality, that sex is not about children, nor even about marriage, but rather about pleasure, self-fulfillment, our own egos – turning what is beautiful, unitive and procreative, into something self-destructive, which eventually devours us, and our children. As Pope Saint John Paul put it in his 1993 encyclical Evangelium Vitae – a year after the novel – the two principal causes of the holocaust of abortion are the trivialization of sexuality, and the divorcing of sex from its inherent procreative signification by contraception. After all, what is abortion, but a post hoc contraceptive?

Pope Paul VI in his own 1968 encyclical Humanae Vitae, taught that these two ‘significationes‘ of the marital act (translated as ‘dimensions’ in English) – the unitive and procreative – are joined by a nexus indissolubilis, an ‘indissoluble bond’, that not only should not be broken, but cannot be. That is, contraceptive sex is not really sex, but something more akin to mutual masturbation, even if covered in a veneer of ‘love, or even ‘unity’. And the sundering of this ‘nexus’ is ultimately destructive of the marital bond itself, which is one of the primary reasons so many such marriages end in divorce. While  those who do maintain the ‘significationes‘ of children usually stay together. After all, they are truly bonded.

That is, of course, the couple are even married in the first place, for how much such ersatz, effervescent sex takes place outside of any promises, vows, commitments, a selfish and solipsistic pleasure-seeking, scarcely more than scratching a prurient itch.

Unlike the novel, our own plague of infertility is self-induced. Now, even couples who want children find it more and more difficult to have them, as the decades of dousing our bodies, and the sacred marital act itself, with chemicals and rubber have their unintended effect. And we must not discount the wrath of God in all of this.

As Steyn points out, we are well on the way to the dystopic scenario of the novel, but all is not lost. There is hope, if we get back to seeing sex as primarily about children. And such children are not only a fruit of the virtue of hope, but also a sign thereof: Hope in God, Who always provides with His own blessings and a gift. It is the spirit of anti-Christ and the Devil who see His little ones as a curse and burden, who hate their innocence and purity, and their demonic miasma has infected our world far worse than any coronavirus.

Deep down, I think even those who despise children will, as the song says, miss them when they’re gone, at least from their own sad lives. Is this the cause of the frothing anger, the pro-abortion fury, that will soon turn into a deep and senile sorrow, like the fruitless would-be mothers of the novel wheeling around dolls in prams, and cuddling their feline ‘fur babies’?

So rejoice, dear reader, with truly Catholic joy, in the ‘Word made flesh’, some image of Whom is seen in babies, toddlers, teenagers – in all the children of men, of women, of families. Revel in their messiness and chaos, their joy and laughter, their love and their hugs, their games and wonder, their adventures and risks, their own hope for the future.

Suffer the little children to come unto Me, and do not hinder them, for to such belongs the kingdom of heaven…