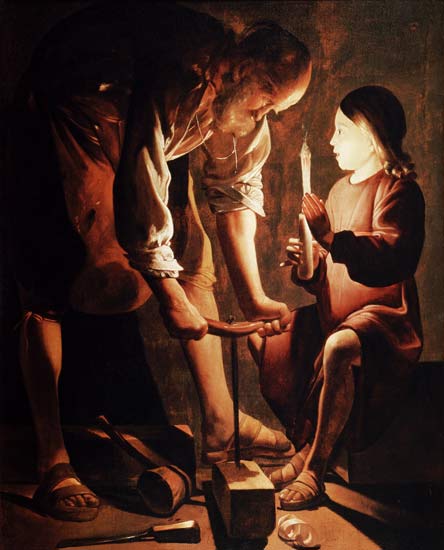 Josephology is a relatively new branch of theology that has appeared about two hundred to one hundred-fifty years ago. It has its origins in Saint Thomas Aquinas and some notable medieval theologians, continues to grow and develop through the efforts of Doctors of the Church such as Saint Teresa of Avila, but it really begins to take shape as an official science or field of study around the time of Blessed Pope Pius IX and Pope Leo XIII after Joseph was proclaimed Patron of the Universal Church by the former and after the papal encyclical on Saint Joseph called Quamquam Pluries was written by the latter. However, it was Father Francis Lad Filas, one of the leading figures in Josephology in the twentieth century, who truly made a way for the theological study of Saint Joseph, also known as “Josephite Theology” or “Josephology,” through many of his various publications, particularly through his book called Joseph Most Just: Theological Questions about St. Joseph.[1] This book of his is very good because, as Filas writes, Joseph Most Just “is intended to be more than a devotional book. It should provide a solid theological basis for devotion to St. Joseph, without becoming so technical as to be of use only to professional theologians.”[2] Essentially what Filas is proposing to us is that Joseph Most Just is intended to be a handbook for Josephology and not merely a devotional book that can be used by both Josephologist and layman alike. As such, this book will provide an excellent basis for understanding what Josephology is, and its significance.

However, some might contend as to how it is possible that one could conduct a theological study of Saint Joseph when theology seems to treat of God rather than His creatures.[6] Such a contention is not new, and Saint Thomas Aquinas considered the same argument in his great work of theology called the Summa Theologiae.[7] Filas in Joseph Most Just echoes Thomas’ response to this objection, writing that “[t]heology treats not only of God directly, but also of all other things in their relationships to their Creator, in so far as these relationships are known in the light of revelation. That is why we can properly define the theology of St. Joseph as a branch of theological knowledge.”[8] Since Joseph is part of the subject matter of theology because of his relationship to God as the Son of God’s Father and as the Husband of the Mother of God, and since these details about Joseph are revealed to us by God in theology, this means that Josephology can be a valid subdivision of the science of theology due to its connection with the formal aspect of this science, viz., the divinely revealed.[9] So regardless of what the material object (the material object being the thing that one is studying) of theology is — be it the Trinity, Christ, Mary, the Apostles, the Old Testament figures, or Joseph — since the formal aspect (that is, the idea or concept that one is trying to get out of the science) remains the same, namely, the things that are revealed by God or the divinely revealed, this is why Josephology can be called a subdivision of theology.

Another objection that might be raised against the formal theological study of Saint Joseph is the concern of taking attention away from Jesus and Mary.[10] An easy reply to this is to point to the proximity of Josephology to Christology and to Mariology. Josephology is a subdivision to Mariology and a further subdivision to Christology, as was said above; Josephology is always discussed in relation to either Christology or in relation to Mariology, as can be seen in the writings of Saint Thomas Aquinas.[11] Therefore, due to the close connection of Josephology with Mariology and Christology, Josephology is actually a mode by which one is better able to understand Mary and Christ more, such that it “helps us penetrate more deeply into the vast mystery of the Incarnation and into the awesome meaning of Mary’s motherhood of God.”[12] Far from taking away from the glory of the King of the Universe and the Queen of Heaven, Josephology actually increases the glory of Jesus and Mary by pointing out how the glory of Joseph contributes to their glory in how Joseph relates to Mary and Jesus through his two-fold vocation as father of Christ and husband of Mary,[13] so as to gain a better appreciation of Jesus and Mary through a better appreciation of Joseph.

This leads to a discussion of why it is important to know more about Joseph. Since will follows intellect,[14] just as any sort of desire for something only occurs when one knows something about the desirable thing,[15] a Catholic can only appreciate, love, and be devoted to Joseph if he knows more about the Great Patriarch.[16] Thus, Josephology should be the foundation for one’s knowledge about Joseph, and only after having a true, rational science of Joseph can a Catholic love and be truly devoted to him.[17]

The second obstacle is on the part of the lack of dogmatic pronouncements by the Church concerning Joseph. Despite the various significant papal pronouncements on Saint Joseph by the Church, such as Joseph’s proclamation as Patron of the Catholic Church and Pope Leo XIII’s landmark encyclical about Joseph Quamquam Pluries, Filas tells us that in such decrees Josephologists cannot discern “dogmatic notes or values,” which poses a problem for Josephology because there is nothing more certain to build one’s Josephology upon than an infallible, dogmatic declaration of the Church, and since no such definite, dogmatic pronouncements exist on Joseph,[26] Josephologists are required to be creative in how they navigate the writings of Scripture, the Church Fathers, the Scholastics, and Church documents to try to piece together from these sources something to support claims made about the more specific questions concerning Saint Joseph.

The final obstacle is on the part of Josephologists. According to Filas, much of what has been written in Josephology comes from sources written in Latin, German, French, and Spanish; there is not much in Josephology written in English,[27] which was one of the reasons why he wrote Joseph Most Just, namely, to make a work in Josephite theology available in English so as to expand research in Josephology.[28] Even so, the problem with much of what has been written about Joseph is that most of it is blinded by the devotion of the authors of such books, with the result that it leads to “untenable excesses” in their writings on account of their great passion and zeal.[29] This has an effect that is contrary to the intentions of such authors, making readers of such over-zealous and erroneous works about Joseph judge Josephite theology as heterodox and worthy of contempt, shunning any new literature written about the saint, which stunts the possibility for growth in Josephology if theologians refrain from doing research in this science out of fear of dabbling in heresy.[30] Such an approach makes Josephologists overly-cautious about writing or claiming anything new, well-founded, and orthodox about the Saint Joseph because of a disordered desire to avoid heresy where there is no heresy, inhibiting the progress of Josephology’s development.[31] There is hence such a great need for a rational, theologically-sound Josephology, with conclusions about Saint Joseph deduced from premises that are found in Scripture, the Church Magisterium, the Fathers of the Church, Scholasticism — particularly Thomism[32] — and from Church documents, so that people are led to the truth about Saint Joseph through an orthodox, scientific Josephology, as opposed to an overly-zealous, emotionally-charged one, and so grow in greater love and devotion for Joseph.[33]

[1] Francis L. Filas, S.J., S.T.D., Joseph Most Just: Theological Questions about St. Joseph (Milwaukee: The Bruce Publishing Company, 1956), 2.  Sadly this book is no longer in print, but Google has made Joseph Must Just available to be downloaded for free online, and it can be found here: https://books.google.ca/books/about/Joseph_Most_Just.html?id=RZeItgAACAAJ&redir_esc=y

[3] Ibid., 3-4. Divinely Revealed Theology is distinguished from Natural Theology, the latter of which is a subdivision of Metaphysics, see Fr. Chad Ripperger, F.S.S.P., Ph.D., An Initial Dictionary of Scholastic Terms and Principles, comp. Fr. Chad Ripperger, F.S.S.P., Ph.D., 2001, https://web.archive.org/web/20011204111408/http://www.alltel.net/~cr25211/Dictionary.htm, emphasis added: “[M]etaphysics is broken into three branches: (1) First Philosophy, (2) Ontology (sometimes called metaphysics in the more restrictive sense) and (3) Natural Theology.” This article will discuss theology as the term is understood to signify Divinely Revealed Theology, and not Natural Theology.

[4] Ibid., 4; See also Dr. Ludwig Ott, Fundamentals of Catholic Dogma, ed. James Canon Bastible, D.D., trans. Patrick Lynch, Ph.D. (Charlotte: TAN Books, 1974), 3, for an explanation of the three branches that the science of theology is divided into, which are: 1) Dogmatic Theology; 2) Biblical-historical Theology; 3) Practical Theology, under which Moral Theology is a further subdivision.

[21] Ibid; Mark I. Miravalle, STD, Meet Your Spiritual Father: A Brief Introduction to St. Joseph (Lighthouse Catholic Media and Marian Press, 2015), 35-41: Such apocryphal accounts are called The Protoevangelium of James, The Gospel of Pseudo-Matthew, and The Coptic History of Saint Joseph the Carpenter.

[32] For an account on the necessity of a Thomistic Josephology, see Joshua Francis Filipetto, “A True Thomistic Versus an Oddly Ockhamist Josephology,” Catholic Insight, October 8, 2021, https://catholicinsight.com/a-true-thomistic-versus-an-oddly-ockhamist-josephology/.

[40] Joseph Card. Ratzinger, Prefect, and Tarcisio Bertone, S.D.B., Archbishop Emeritus of Vercelli and Secretary, “Doctrinal Commentary on the Concluding Formula of the Professio fidei,” Congregation for the Doctrine of the Faith, Libreria Editrice Vaticana, June 29, 1998, https://www.vatican.va/roman_curia/congregations/cfaith/documents/rc_con_cfaith_doc_1998_professio-fidei_en.html, n. 10: “The third proposition of the Professio fidei states: ‘Moreover, I adhere with religious submission of will and intellect to the teachings which either the Roman Pontiff or the College of Bishops enunciate when they exercise their authentic Magisterium, even if they do not intend to proclaim these teachings by a definitive act’.  To this paragraph belong all those teachings – on faith and morals – presented as true or at least as sure, even if they have not been defined with a solemn judgement or proposed as definitive by the ordinary and universal Magisterium. Such teachings are, however, an authentic expression of the ordinary Magisterium of the Roman Pontiff or of the College of Bishops and therefore require religious submission of will and intellect.18 They are set forth in order to arrive at a deeper understanding of revelation, or to recall the conformity of a teaching with the truths of faith, or lastly to warn against ideas incompatible with those truths or against dangerous opinions that can lead to error.19  A proposition contrary to these doctrines can be qualified as erroneous or, in the case of teachings of the prudential order, as rash or dangerous and therefore ‘tuto doceri non potest’.” It is worth noting that endnote 18 of the “Doctrinal Commentary on the Concluding Formula of the Professio fidei” is actually citing paragraph 25 of Lumen Gentium, which I cited above in endnote 39 of this article. See also Codex Iuris Canonici, Libreria Editrice Vaticana, https://www.vatican.va/latin/latin_codex.html#DE%20ECCLESIAE%20MUNERE%20DOCENDI, Can. 752, emphasis mine: “Non quidem fidei assensus, religiosum tamen intellectus et voluntatis obsequium praestandum est doctrinae, quam sive Summus Pontifex sive Collegium Episcoporum de fide vel de moribus enuntiant, cum magisterium authenticum exercent, etsi definitivo actu eandem proclamare non intendant christifideles ergo devitare curent quae cum eadem non congruant.”

[42] Joshua Filipetto, “Speaking Out: Go to Joseph before it’s too late,” The Catholic Register, November 3, 2021, https://www.catholicregister.org/ysn/youthcolumn/item/33671-speaking-out-go-to-joseph-before-it-s-too-late.

[43] In Sinu Jesu: When Heart Speaks to Heart—The Journal of a Priest at Prayer (USA: Angelico Press, 2016), 246, emphasis mine: “Such a man was Saint Joseph. He was the living image of My Father, and he was chosen by My Father to be a father to Me in My sacred humanity.”