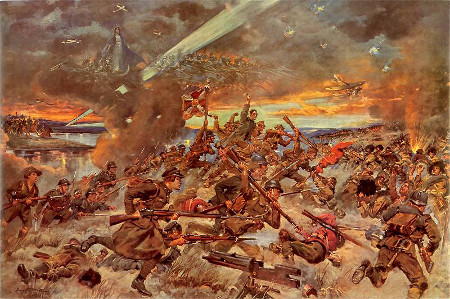 Victory in battle does not depend on who has the largest army; it is the Lord’s power that determines the outcome (1 Maccabaeus 3:9)

Presumably the fact of the Our Lady`s extraordinary apparition on 15th August 1920  is not known at all by the Catholics belonging to Anglo-Saxon culture. No wonder, even in Poland it was kept quiet for decades, uncomfortable for both sides of the Polish political scene in the mid-war period, since most of leading politicians were freemasons, and the Communist governments after the Second World War openly declared religion as the ‘opium of the masses’.

However, forty-seven years before that event, Polish mystic Wanda Malczewska in a private revelation obtained this prophetic message “As soon as Poland regains her independence, shortly her long-standing oppressors will rise against her. But my young army, fighting in my name will overcome them, push them far away and finally will force to make peace. I will help them”. It is worth emphasizing here that Mary the Queen of Poland indicated the precise time of her supernatural intervention – 15th August.

For the Bolsheviks in the full of their revolutionary enthusiasm of 1920, the advance to the West was an ideological necessity, while bourgeois Poland was a mere bridge to be crossed in order to link Communist Russia with Germany on the brink of revolution. Lenin called for ruthless victory. The Red Army Command was absolutely certain that the defeat of the cornered and isolated Warsaw was only the matter of days. This opinion was also shared by the members of the International Military Mission in Poland. British ambassador to pre-war Poland,  Lord Viscount Edgar D`Abernon, was absolutely sure that the Bolsheviks would easily seize Warsaw either by the frontal attack or by surrounding the city from the south. Even the Communist press prematurely announced the fall of the Capital. The Russian commander Mikhail Tukhachevsky had no doubt of his sweeping victory as the Polish army had been retreating in panic for six weeks, making about ten English miles daily. The boldness of his drive westward was the key to his success. Moreover the Soviet High Command  dispatched 60,000 men as reinforcements.

Friday, August 13 – The Bolsheviks conquered Radzymin and its nearby villages, with Warsaw within a stone’s throw (only 23 km east of the town). At this time Marshal Pilsudski, the Commander-in-Chief, tried desperately to raise the morale of his tired and demoralized soldiers, but all in vain. To make things worse, logistics were a nightmare. The Polish army was equipped with guns made in five different countries and rifles manufactured in six, each of them using various kind of ammunition. All diplomatic missions were evacuated to Poznan, part from the Vatican post where Nuncio Archbishop Achille Ratti (later known as Pope Pius XI) makes a decision to meet the Antichrist one on one. He appeals for the worldwide public prayers for Poland. Ordinary people of Warsaw drop to their knees in droves. In no way can churches hold crowds engrossed in prayer. French general Maxim Weygand says ”I have never in my life seen such a prayer as in Warsaw that time”.  As a last resort, the relics of a patron saint of Poland – Andrzej Bobola, and a patron saint of Warsaw – Ladislaus of Gielniow – are displayed for public homage. All in all, people realize that only a miracle can save Poland from total annihilation. Their faith is tested to the extreme.

Sunday, August 15 – At the daybreak the Bolsheviks start the offensive and easily overrun Polish positions. Murderous fire of their machine guns ruthlessly mowed down fleeing young and inexperienced Polish soldiers. Many of them were students of Warsaw schools who a couple of days before volunteered to defend their homeland.  Seeing chaos and terror in the eyes of the lads, Father Ignacy Skorupka, moved by internal inspiration, leads the extended line to meet wheezing bullets of the enemy. He moves ahead, holding a wooden crucifix, meeting his death, uttering “for God and for homeland”, on the outskirts of Ossowo village.

Nobody expects that this is a turning point of the battle, but from this moment on the Soviets not only retreat, but flee, panic-stricken.

The reliable and consistent accounts confirm the appearance of Our Lady at approximately the same time in two different locations – Ossow and Wolka Radzyminska. According to the memories of Cardinal Alexander Kakowski ”the captured Bolsheviks told about the Mother of God, above a priest vested in surplice and holding a cross”. In another instance during a night charge of lieutenant Stanislav Pogonowski, they saw a holy female figure, soaring high above the ground.  There was a halo round her head, with the blue lapels of her coat blowing in the wind covering the glare of Warsaw. She was holding a sort of a shield which deflected Russian bullets. Other sources report of the Soviets’ incessant march to Warsaw which they regarded as quite easy. Not until they reached the suburbs did they realize they had completely lost the ability to command and the will to fight. There can be found Polish witnesses amongst testimonies who met terrified, teeth chattered, bug-eyed almost insane the Red Army soldiers beseeching to stash them away from ‘Tsarina’ – the Mother of God (Matier Bożju). They were subsequently passed on medics and doctors who worked in the P.O.W. camps. All available reports say that Our Lady appeared solely to the Red Army troops.

The following day the Polish Army delivered  a shattering blow which no one had expected to succeed. Marshal Pilsudski`s flank attack from the south split the Soviet advance and severed Tukachevsky`s communications. Three big Soviet armies were disintegrated. One large group was driven into internment in East Prussia. The rest fled. Marshal Pilsudski admitted: ”It seemed to me as if I had been in a dream, in the world of an enchanted story. I was not able to discern whether it was a dream or truth […] Where was  the 16 Red Army?   I was going to Minsk and saw abandoned cannons in a field without a team, plentiful of corpses on both sides of a road […] local people testified that they had met the Bolsheviks fleeing in panic in different directions”. The Red Army had suffered the only unredeemed defeat in its distinguished history. Eventually, the peace treaty was signed in Riga on 18th March  1921.

Pope  John Paul II reminded us of the meaningful words, “There has been a conspiracy of silence concerning the great Miracle on the Vistula for years. That’s why today the Divine Providence as though orders us to maintain the remembrance of this great event in the history of our nation and Europe that took place on the eastern side of Warsaw.”

From a military viewpoint it seems impossible that volunteers who were mostly high school or even primary school students were able to vanquish veterans of the 79th Infantry Brigade under the command of Gieorgij Chachanin. No one would also challenge the statement of Poland’s Primate August Hlond that “Josef Pilsudski deserves eternal gratitude of the Polish citizens and the whole Christianity“. However, the primary source of the stupendous victory lies in Our Lady`s intercession. Had it not been for her supernatural intervention, Poland would have ceased to exist right after regaining the independence. Furthermore, I am utterly convinced that if the citizens of Warsaw 1944 had had so much faith as the ones of 1920, the Warsaw Uprising would not have fallen and the city would not have been  destroyed by the Germans. For the time being, on 13th August 1920, Poles in their majority leaned on Jesus who is the true Master of World. As a result, on the 15th, Providence worked the miracle. Unfortunately, twenty four years later both the command of the Home Army and the citizens of Warsaw preferred rather to rely on the Allies` help and their own military power, than beg for the God`s Mercy.

In today`s world faced with the threats of terrorist attacks and creeping Islamisation of Europe, everyone is called upon to live the faith that can move mountains. Christianity  will not survive without it. One must not forget that the Rosary – the spiritual sword of Mary – is the best means to defeat the enemy.