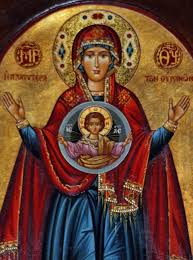 In one of those many paradoxical ironies of history, it was on this day that Woodrow Wilson – for whom I have not much admiration otherwise, and his ‘Fourteen Points’ at Versailles in 1919 paved the way for an even worse war two decades later – anyway, the president did proclaim this day in 1914 as the first Mother’s Day, with the second Sunday in May dedicated to mothers across the land. My own Dad has some misgivings, telling us as children that ‘every day should be mother’s day’, with which sentiment I agree, but like all universal truths, a special day does carry some significance, even in a secular sense.

And, of course, as Catholics, especially fitting in this whole month dedicated to our own spiritual mother, Mary, Theotokos and mediatrix of grace, through whom God saw fit to bring about, in part, His work of redemption, as He does with us all, if we but cooperate in His salvific will.

I say ‘paradoxical’ at the beginning of this reflection, since it was also on this day in 1960 that the FDA approved what is now known as ‘the Pill’, ushering in full-bore the ‘sexual revolution’. Developed by Gregory Pincus and John Rock, the latter a daily-Mass going gynecologist at Harvard, the Pill – primarily a synthetic form of progesterone (progestin) that tricked a woman’s body into thinking itself always pregnant – promised women a release from the burdens of motherhood, and both men and women free-for-all sex, anytime, anywhere, actually touted in these terms. Of course, as things turned out, the sex became more free-for-all for the men then the women who, as Paul VI rightly predicted eights years later in Humanae Vitae, that they would be sexually objectified:

It is also to be feared that the man, growing used to the employment of anti-conceptive practices, may finally lose respect for the woman and, no longer caring for her physical and psychological equilibrium, may come to the point of considering her as a mere instrument of selfish enjoyment, and no longer as his respected and beloved companion.

Ah, yes, ‘flesh of my flesh, and bone of my bones’. No one in their right mind denies that women may choose whether or not to become mothers. What we may not choose, however, is to dissociate sex from motherhood. It is, as the quaint but true expression has it, the way God made things, the very nature of man and woman in their sexual union, that the marital act – for it is only proper within matrimony, which, as its etymology implies, is a motherly endeavour – must signify both the unitive and procreative aspects, which are joined inextricably by what the Pope termed a nexus indissolubilis.  What God hath joined, let not man tear asunder. Contraception – or, more properly, the contraceptive mentality, of which the Pill is but a fruit and an accessory – almost inevitably breaks down families.

But we have torn what God hath bound asunder, or tried our best, and the wreckage is all around us, not least in what Pope John Paul laments as the ‘lack of esteem for motherhood’ – the sad tragedy of certain aspects of feminism – and the breakdown of marriages and families, displaced children left on their own, loneliness, the crumbling of communities, poverty, the welfare state, and the faceless state takes over, as we descend into the meaningless, unmoored individualized slavery of a pointless existence.

The family is our link to eternity, a prelude of the community of heaven, and without this ‘foundational cell of society’, we are lost. As the family goes, so goes the world.

Strange what one little Pill can do.

After Paul VI promulgated his fateful encyclical on the feast of Saint James, July 25th, 1968, the battle lines were drawn, and they run through society, and even the Church, to this day. Dr. John Rock stopped going to Mass and left the Faith, becoming a grandfatherly poster-boy for contraception. Many have followed him. We can only hope that they know not what they do. Yet in that moral application of Newton’s third law, for every action, there is always an opposite reaction, whether we intend such or not.

On my daily walk, I pass by a field, in which there are at present a flock of sheep with their lambs, and I’ve been surprised at how quickly they’ve grown up. What were a couple of weeks ago tiny fluffs of white lying down most of the time, are now gamboling about independently. I asked my sister-in-law at the slow growth of human children, still needing their mother’s attention for years after birth (and don’t get me started on thirty-somethings moving back to their childhood bedroom and having Mum do their laundry). She said, well, perhaps that’s because God knew it would take that long for mothers to truly learn to love their children, and, we may add, vice versa. And, I thought, only a mother could answer like that.

So, for now, we rejoice in motherhood, in all that glorious term means. Not just bearing children, but cherishing them, educating them, loving them, forging a bond that will last unto eternity. For a mother’s love is eternal, and like that nexus indissolubilis, can never really be broken.