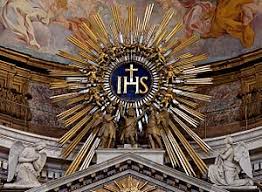 On this third day of the new calendar year, the Church celebrates the Holy Name of Jesus on this third of January, with the whole month dedicated to this devotion, the name above all other names, by which all men are saved, and to which every knee shall bend and every tongue proclaim that Jesus Christ is Lord. The power of the holy name is vast indeed, as the Catechism makes clear:

The name “Jesus” signifies that the very name of God is present in the person of his Son, made man for the universal and definitive redemption from sins. It is the divine name that alone brings salvation, and henceforth all can invoke his name, for Jesus united himself to all men through his Incarnation, so that “there is no other name under heaven given among men by which we must be saved.”

Jesus’ Resurrection glorifies the name of the Saviour God, for from that time on it is the name of Jesus that fully manifests the supreme power of the “name which is above every name”. The evil spirits fear his name; in his name his disciples perform miracles, for the Father grants all they ask in this name. (#432, 434)

Constantine conquered at the Milvian Bridge in 313 in the divine name, inspired by a vision, inscribing the first three letters of Christ’s name in Greek, IHS, in his ensign and shields.

Given its holiness and power, it is also in His name that we pray:

The name of Jesus is at the heart of Christian prayer. All liturgical prayers conclude with the words “through our Lord Jesus Christ”. The Hail Mary reaches its high point in the words “blessed is the fruit of thy womb, Jesus.” The Eastern prayer of the heart, the Jesus Prayer, says: “Lord Jesus Christ, Son of God, have mercy on me, a sinner.” Many Christians, such as St. Joan of Arc, have died with the one word “Jesus” on their lips. (#435)

In 1597, Pope Sixtus V granted an indulgence to anyone reverently saying, “Praised be Jesus Christ!”, which still holds as a partial indulgence for anyone devoutly praying in the divine name. Today’s feast, suppressed in the post-Vatican II enthusiasm to ‘simplify’ everything’, was reinstituted by Pope Saint John Paul II in the 2002 revision of the Roman Missal.

Even Hollywood sort of gets it, for when a character swears in a film, it is invariably in Christ’s name, not Mohammad, or Buddha, or Vishnu, or any of the panoply of Roman and Greeks Gods, even if ‘by Jove’ is murmured by some old school Brits.

The Incarnation is the most important event in history, God become Man, and His message is to live for eternity, to use our time well in building up that ‘treasure’ for the Kingdom. That is why we divide history into two eras: Before Christ, and after Him. The God-Man lived but 33 years, enough to accomplish His mission. Some are given less, some far more. The key is that whatever weeks, months and years we are given, we should see and use as a gift, to do good to those around us, in all the panoply of ways in accord with our vocation and path. So, as Pope John Paul proclaimed, cast forth into the deep, be bold, be not afraid, and, in a spiritual sense, conquer the world.

So rejoice; as Chesterton would say, and as Scrooge found out just in the nick of time, each new day is a gift, and what better Christmas present for God than to offer ourselves at the close of each one back to Him, a little bit better, and with a little more good in the world, than when we awoke? Carpe diem, Christianus!