The ‘Communion in the hand’ controversial swirling around the instantiated Covid protocols is causing crises of conscience for many Catholics. After all, reception in the hand itself began as a rebellion – first in Holland (yes, I know – why there, when they used to be so devout?) then spreading around the world – against the long-standing custom of the Church – and by long-standing, we’re talking millennia – that the laity receive the Eucharist on the tongue, for various pious and practical reasons: To signify being fed by the Good Shepherd in the person of the priest, and that we don’t feed ourselves with what Christ wills to feed us; to safeguard the dignity of the Body of Christ, handled by hands consecrated for that purpose; to ensure it was not carried off for vain or nefarious purposes.

Pope Saint Paul VI issued an indult soon after the Council that Communion could be received on the hand, so, pace the thoughts of some, such a practice is not an intrinsic evil (after all, one could pick up the Eucharist cast upon the ground, say, and consume the species, as saints have done, in emergency situations).

One can hold, and many do, that the current situation is not such an emergency, and such is the argument of Dr. Andrew Caruk. It it thus that we might understand what he claims to be an ‘evil’ – but I would caution we must wary of bandying about that term. Yes, it is objectively less perfect, less devout and more open to abuse, scandal and diminution of belief to receive in the hand, not least while standing and lining up like we’re at a grocery store – oh, where are all the altar rails! – but we must at least accept what the Church has permitted in her praxis, which may be altered according to circumstances.

What is true is that the Church at the highest authority has granted the faithful the right to receive the Eucharist on the tongue, while kneeling, the constant practice of the Church, and a practice which should not be lightly altered, even temporarily.

As I wrote recently, each Catholic must decide in his own informed conscience, how to deal with this, at least in those dioceses where Communion on the tongue is proscribed, and on the hand prescribed. There is no easy answer, for we are under the bishops’ authority one way or the other, whether that be amenable to us or not. But we also have the right to speak our mind, and here is Dr. Caruk speaking his: (Editor)

The Supreme Authority of the Universal Church in Rome has stated unequivocally on four separate occasions: in 1969, 1985, 2004 and 2009 through the Congregation for Divine Worship, making it crystal clear, that receiving Communion on the tongue is the norm for the entire Catholic Church, and cannot be denied to the faithful, if they choose to receive it as such. This is in contrast to what His Excellency Bishop Crosby has ordered in his June 10, 2020 letter to the faithful in the Diocese of Hamilton, where he stated: “Communion can be received only in the hand…”

In 1969, The Sacred Congregation for Divine Worship, issued the Instruction Memoriale Domini  (AAS61 (1969):541-547), saying: “…Thus the custom was established of the minister placing a particle of consecrated bread on the tongue of the communicant. This method of distributing Holy Communion must be retained…Because it expresses the faithful’s reverence for the Eucharist.”

Later when the question of Communion on the tongue being denied again came up, a letter from The Holy See to the American Bishops on April 3, 1985 was written by The Congregation for Divine Worship, by Archbishop Augustin Mayer, to The National Conference of Catholic Bishops. In the letter under Point 7, it states: “The faithful are not to be obligated to adopt the practice of Communion in the hand. Each one is free to communicate in one way or the other.”

Fast forward to 2004, when The Congregation for Divine Worship in its new Instruction named Redemptionis Sacramentum, stated: “Although each of the faithful always has the right to receive Holy Communion on the tongue, at his choice, if any communicant should wish to receive the Sacrament in the hand… the sacred host is to be administered to him or her. If there is risk of profanation, then Holy Communion should not be given in the hand to the faithful.” (R.S. 92- March 25, 2004).

Again in 2009, when the H1N1 “Swine Flu” epidemic was occurring, some bishops in Catholic Dioceses tried to ban Communion on the tongue for hygienic reasons, prompting someone to write to the CDW for clarification. The response was predictable. The Congregation for Divine Worship referred in its July 24, 2009 letter to an earlier ruling of the 2004 Redemptionis Sacramentum Instruction, by stipulating again, that: “…each of the faithful always has the right to receive Holy Communion on the tongue.” (R.S. n.92), and further stating that “nor is it licit to deny Holy Communion to any of Christ’s faithful who are not impeded by law from receiving the Holy Eucharist (cf. n 91). The Congregation thanks you for bringing this important matter to its attention. Be assured that the appropriate contacts will be made.” 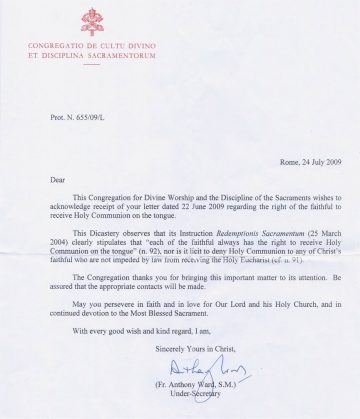 Therefore, based on the above letter, the CDW regards clergy who illegally bar Catholics from receiving Holy Communion on the tongue as violating the law. No bishop on earth has the authority to countermand a law or specific directive of the Vatican, that is intended to the Universal Church.

Declarations by clergy that they are giving Communion on the hand to protect us from contagious diseases are scientifically wrong. As a scientist who has studied extensively microbiology in university, no scientific proof exists that shows that there are less germs passed on to others from the hands, than from the mouth -and most likely it is the other way around, since our hands come in contact with much more unusual and dirtier items than our mouths.

In conclusion, since the Supreme Authority of the Universal Church in Rome has told us repeatedly that Catholics cannot be forbidden to receive Communion on the tongue, even in a situation involving a contagious illness, their ruling outranks anybody and everybody else in the hierarchal structure of the Church. If nevertheless we are made to feel guilty for not wanting to possibly spread the contagion, we should think of what St Thomas Aquinas said about the end never being justified by the means, namely: “An evil action cannot be justified by reference to a good intention” (cf. St. Thomas Aquinas, Dec. praec.6). The end does not justify the means. (CCC 1759).

Let us all pray that this worldwide crisis affecting our economies, our health, individual freedoms to choose our healthcare and how to worship, especially on reception of the Eucharist (grounded in Catholic theology), will be respected by our governments and our bishops and priests – with God’s help.