The highlight of Christmas is the Midnight Mass. There is an aura and smell of festivities, the church is beautifully decorated, elegantly dressed people are filled with joyous expectation, the choir is at its best singing angelic carols, and children ceremoniously start the mass by placing Baby Jesus into an empty crib.

The sermon about the Good News is usually magnificently simple and direct, but this year Father Joseph used two props, two gifts, which he had hidden under the tree next to the manger. One was a nice gift box with a bow, the other an ordinary white paper bag. Father Joe asked the congregation which gift they would choose. I must admit I would have chosen the nicely packaged one, but Father had a trick up his sleeve. The exquisite gift box was empty but inside the old scruffy paper bag was a box of premium Swiss chocolates. People laughed, and I suppose I wasn’t the only one who was fooled. Father’s message was that the birth of Jesus, God’s gift to us, although unappealing, in a poor stable, among the smelly farm animals, shouldn’t be judged by its external appearance. Father’s analogy didn’t quite work for me and judging by the hesitant laughter other believers weren’t convinced either.

Historically, the ancient Roman festivals with gifts (Saturnalia, ‘feriae’ or holy days, and ‘dies natalis’ of various deities) prefigured Christmas. Nevertheless, Christmas gift-giving is a genuine Christian grass-roots tradition, and different nations have each developed unique customs. In the Byzantine and Ukrainian tradition it is usually St. Nicholas who brings gifts on his feast day, December the 6th; in the Western German tradition it became the Christ-child.

As a child born in the former Czechoslovakia I had the best of both worlds. My sweets were brought by St. Nick three weeks before Christmas, and the Holy Child brought my toys on Christmas Eve. Not even the hostile communist regime could out-Herod Herod and ban gift giving. I don’t know how my parents pulled it off, but I will never forget when at the age of six, just after our family moved to one of the staunchest communist towns where religion was suppressed, I was miraculously visited by St. Nicholas, St. Lucia, and a chained devil who loudly threatened to bring a lump of coal next year should I misbehave or disobey my parents.

Regardless of pagan traditions, the Christian roots of gift-giving must be sought in the story of the Magi whose precious gifts revealed the Royal nature of Jesus’ birth. One simply cannot imagine that the rich and wise Magi presented their gifts to the King of kings in a scruffy paper bag. Christ’s birth is the most exquisite gift, and it was so artistically “wrapped” and presented by God the Father through its simplicity, purity and the hidden wealth of circumstances and meanings, that Christmas images, metaphors, and abstractions have became an everlasting inspiration for artists. And I mean not only the sophisticated Italian painters, English poets or Austrian composers, but also the simple folk around the world, all peasants and shepherds at heart whose Christmas arts, crafts and carols are no less beautiful.

Paradoxically, material prosperity is forcing us to scale down and reconsider gift-giving as our increasingly cluttered homes are filled with gadgets and trinkets. Not only consumerism but also modern progressive Santa Claus mentality has cheapened the essence of Christmas, including gift wrapping. Both the utilitarian Scrooge and the envious Grinch realized that Christmas will come even without gifts or feasts, although Dickens still understood that the dyspeptic gruel eating Scrooge needed some supernatural persuasion. Ultimately, it is Baby Jesus who makes the Christmas magic work, including our hearts growing three sizes bigger, and it would be a shame if we left no room in our Christmas for genuine gifts from the people we love and who love us.

Like little Susan in the Miracle on 34th Street movie, does a child in a divorced “family” really worry about material gifts anymore? Susan’s “successful” independent single mother can afford to buy anything, including the catered Christmas dinner, and she doesn’t care about receiving Christmas gifts. Susan was a wise child, but how much does the new mindless iGadget-crazed generation, which treats Christmas Holidays as another Black Friday or Cyber Monday, value their “Hollow-day” gifts? Just look at our overfilling garbage dumps. Why bother wrapping throw-away gifts brought by a fictitious fat man or his imaginary elves nobody believes in? Sadly, I presume, most of these kids who have lost their innocence will eventually turn into little savages, like Ralphie and Randy in the gift-unwrapping scene of A Christmas Story movie. Prompted by the reverence to our “magi”, a new Hollywood movie next year may elevate the wisdom of our “scientific” generation — “Mom, tell Santa’s elves not to wrap the gifts anymore, since wrapping, bags and boxes unnecessarily pollute the planet and contribute to global warming! We don’t want the North Pole to melt, do we?”

A meaningful Christmas gift, made or bought, is given with love, to a special person made in the image of God, and it deserves to be treated with love and respect. A gift card or a monetary donation to a worthy charity can be a suitable gift, but those are special circumstances and one should try to make even such gifts as personal and noble as possible. (Beware, not all philanthropy is worthy charity, but that’s a different story.) What makes any gift worthy and appropriate is the philosophical quality we call today “magnanimity.” For the ancient Greeks this meant a man who was “good and noble” when dispensing his favor and gifts. Aristotle considered the magnanimous man the most virtuous of all, deserving the highest moral praise. Interestingly, Aristotle considered magnanimity the Golden Mean between vanity and humility, and thus a magnanimous gift, especially a gift from God to us, will be generous yet not proud or overwhelming, and presented humbly so that its receiver will be able to accept it without any qualms or fear. Even in philosophical sense there could not have been a more perfect Divine gift than God giving His Son to us humbly as a newborn baby.

In any case, a nice wrapping ought to stress and elevate the giver’s magnanimous intent. Indeed, we immediately judge a gift and its giver by the wrapping! Likewise, every magnanimous gift ought to be received with grace and love, repaying the giver’s kindness the best we can, with poise and genuine gratefulness. It ought to be like a beautiful Christmas Mass where we receive the most “Holy “ and most “Precious Gifts” as the Byzantine Liturgy calls them. And like the real Mass, our gift giving and receiving also ought to be ceremonial.

What do I mean? I came across a charming talk which was originally broadcast by the Prague Radio still during the communist era. To appreciate what Christmas gift-giving is, (and how language can elevate the meaning of things and their understanding), it is important to note that Christmas Eve in Czech and Slovak is called “Štedrý Večer” or  the “Generous Evening,” implying abundance, lavishness and the magnanimity of this most Holy Night. My own first memories of Baby Jesus bringing gifts are like this.

Its author, the Czech writer and storyteller František Nepil, talks here about giving and receiving gifts, assuming his Czech and Slovak audience knows all about the sacred plentifulness of the Evening, including the rich Christmas Eve supper which precedes the gift giving ceremony. Although not as structured and ceremonial as the traditional twelve course Ukrainian Christmas supper, our supper was lavish, festive and carelessly artistic, truly Bohemian.

Even when meat and luxury items were scarce, my parents and grandparents always  managed to create a “Plentiful Evening.”  My dad loved cooking ever since he got his Boy Scout badge, even later when he was a cook in the army. My mom and dad learned from grandmas and aunties, who were superb cooks and bakers. I suppose we were all starved a bit after the advent fast, and so the days of preparation were just as exciting. Grannies and our parents took pity on us, slightly overweight and hungry children, and didn’t reprimand us when we nibbled on bits of delicious half-cooked or half-baked food. I swear I saw a smile on their faces every time they turned away when I sneaked into the kitchen to steal something.

When the Christmas feast finally began with prayers and grace, despite all the elaborate food we could smell, everybody’s favor 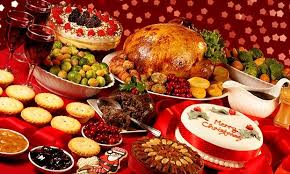 ite was the simple opening meal — large crunchy wafers, previously blessed by a priest with holy water, resembling the host the priest consumes during the mass. The wafers were served with walnuts and honey and depicted Christmas motives. Sadly, nobody makes them anymore. (Since they cannot be bought in Canada, we now buy ice-cream cones. They taste just as good, but they do feel as if they came from the North Pole.) It looked like everybody was starved, because the wafers were always a meal in itself and mom had to remind us that there was other delicious food coming, freshly baked peasant bread with divine crust and hearty Slovak sauerkraut and wild mushroom soup (served with tasty Hungarian sausage and smoked Polish pork the next day, since meat was still not allowed), juicy Czech carp with delicious potato and apple salad, and at least a dozen excellent Austro-Hungarian pastries, Christmas breads and cakes, not to mention fruit, figs, dates, home -made candy and chocolates, Viennese coffee from freshly roasted beans, the best Czech beer and expensive Hungarian Tokaj wine. Truly a feast for a king!

Then the King magically arrived with His gifts, like in a fairytale. And after the gifts were happily received, everybody hurried to the Midnight Mass, (later not available, or monitored by Herod’s spies), to thank Baby Jesus and to celebrate with Him, with the Holy Family, the Magi, the shepherds and all the angels on High. Not all my Christmases have been “white”, but when once in a while it turns out less than picture perfect, I always “dream” about the ideal childhood Christmas I have painted in my mind.

Like sweet exquisite Tokay, I hope you will enjoy this story as much as I enjoyed writing it. I pray these old European customs will also bring Christmas cheer and delight to your Canadian families.

Peter Hála was born and educated in former Czechoslovakia. In 1980 his family managed to escape the communist regime and came to Canada. He works at the University of Alberta in the area of automation and control systems. His interests and hobbies include history, philosophy, literature, translation, music and various outdoor pursuits.