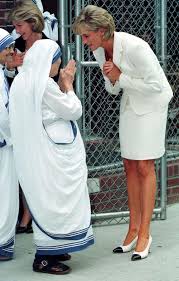 September 5th was the 20th anniversary of the death of Teresa of Calcutta, canonized by Pope John Paul II on September 4th, 2003, but still known colloquially as ‘Mother Teresa’, sometimes with a ‘Saint’ preceding.  Her death in 1997 was overshadowed by the tragic, violent and unexpected death of another famous figure, Princess Diana of Wales, formerly Diana Spencer before her marriage to Prince Charles, whose life was a sort of mirror-image of Mother Teresa’s. Worldly fame, fortune, physical beauty, romance (of a sort) were not the lot of the tireless worker in Calcutta, who would chose the worst room for herself in her convent of Sisters.

Yes, Diana had her good qualities, and my point is not to judge her; the princess may have made her peace with God in the midst of her turbulent life.  What began as a fairy tale, with the most lavish and expensive wedding in modern history, was shown to be a facade, now being exposed to the world in memories and biopics.  Diana’s tragic end in a dark Paris tunnel was sad. But it does seem somehow providential that God would permit these two women to depart this mortal coil within one week of each other in very different circumstances, to provide a contrast, perhaps, between what the world offers, and what God does.

Besides the eternal fate of each, one of which we know now for certain, the other we leave in the hands of God, there is the earthly story: Which woman was more fulfilled and happy in this side of eternity? Saint Teresa’s memoirs (which she wanted destroyed), like Diana’s, indicate a soul that carried a lot of suffering, especially interior.  Yet her darkness seems to have been vicarious and salvific, carrying the burdens, the lack of faith and the agony, of others, in a purifying and sanctifying dark night of the soul.  Yet the Saint of Calcutta always radiated joy, goodness, patience and kindness, regardless of how she was ‘feeling’ inside.

Teresa and Diana trod divergent paths, made very different choices in life, and we now know that the one we can pray to, the other we must pray for (regardless of the secular verdict found in that treacly Elton-esque ballad). Perhaps, we may hope, the poor but determined saint interceded for the rich but wandering princess, and they may meet in paradise.

One never knows.  But there really is something to Our Lord’s warning that the first shall be last, and His invitation to sell all we have and come follow Him.  After all, heaven is worth nothing less.