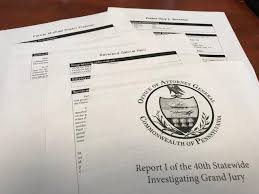 In light of the apparent scandals washing over the Church, readers should peruse and ponder this critical assessment of the recent Pennsylvania Report, which seems, from the objective analysis of Bill Donohue, president of the Catholic Civil Rights League, to be a biased and even malicious piece of work. Yet many Catholics are jumping on the report as though it were Gospel truth, and not the work of anti-Catholic lawyers with an animus against the Church, and against the Catholic priesthood in particular, with an intent to besmirch at any opportunity.

It is with this in mind that we all, especially those calling for unbridled witch hunts, need to take a deep breath, say a deep prayer, go for a walk, marvel and immerse ourselves in God’s creation. The Almighty (and He is Almighty) is permitting certain things, including scandalous evils, to be revealed, all as a prelude (we know not how long) to the great ‘unveiling’, that ultimate apocalypse, wherein all things will be revealed, everyone’s deeds and misdeeds and all the intentions of our hearts, the wheat and the tares and the whole nine yards of cloth.

With certain exceptions, of the more grievous sort, we should, by and large, allow the great Judge to do the sifting.

On a side note, I was surprised to read in the report that, in the United States at least, in public institutions (which have resisted by might and main any similar ‘report’ being issued on them, but which would well be far, far more incriminating) victims have only 90 days to report sexual impropriety, after which their own ‘statue of limitations’ kicks in. There is some wisdom in this (although I am not arguing it is right), but one must at least ponder, for how does one prosecute, with any valid evidence for defence or conviction, cases going back 90 months, to say nothing of thirty years, especially with all the secrecy that sexual sins entail?

There are lies, damned lies, and then there are statistics, as Mark Twain quipped, and the report on the report helps us see the misleading nature of the last in that list. The Devil (who is ultimately behind all of this) wants our souls, and to entice souls out of the Church. Stay faithful. Stay strong. In all of the subterfuge, spin and obfuscation, we need to keep our wits about us, calmly and without anxiety.

I would paraphrase Saint Benedict: Ora et cogito: Pray and think, the two hallmarks of being human, which will allow us to the right and prudent way forward.

This applies also to the recent ‘development’ in the Church’s teaching on capital punishment, so please read over Father Scott Murray’s balanced take. I will add to this analysis soon enough. I was a bit taken aback by the public appeal in First Things, to the cardinals at the Vatican, to urge the Pope to rescind the proposed change to the Catechism; not that I agree (or disagree; for now, I am trying to make the proper distinctions in my mind). But this does signify a deep division in the Church that is becoming more public and evident.

Some of those Marian prophecies seem to be unfolding before our eyes, and we should remember Our Lord’s warning about being led astray.