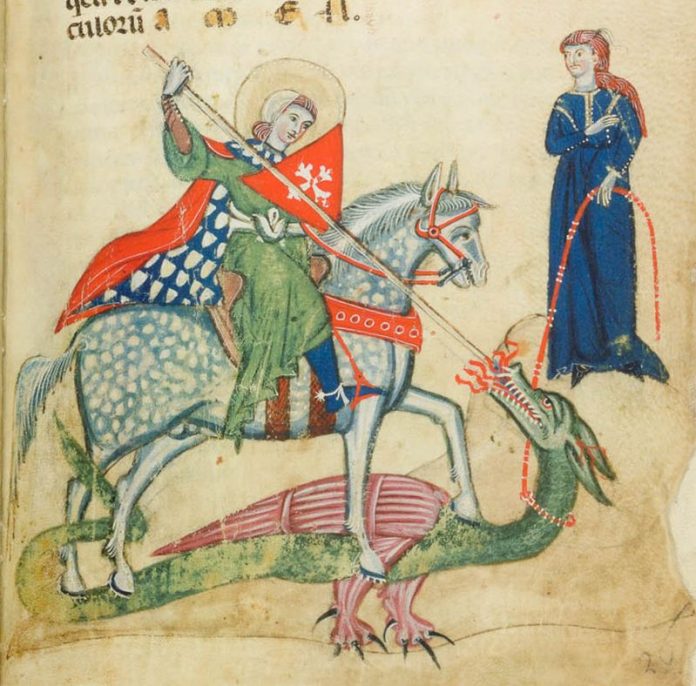 On April 23rd, the universal Church celebrates with great joy the feast of St George. Besides being a saint of the early times of the Church St George has many devotees around the world. His life story as well as his cult are really a source of inspiration for all those who want to take Christian life seriously.

His name, George, which in the Greek language means “farmer,” already says a lot about the spirit with which he was imbued. Born around the year 280 in Cappadocia, George grew within a Christian family that cultivated Christian life. I would imagine George’s family living on the same lines given to us by St Pope John Paul II in his apostolic exhortation on the role of the Christian family in the modern world, Familiaris Consortio, where he writes:

For this reason the Synod expressly recognized the useful contribution made by such associations of spirituality, formation and apostolate. It will be their task to foster among the faithful a lively sense of solidarity, to favor a manner of living inspired by the Gospel and by the faith of the Church, to form consciences according to Christian values and not according to the standards of public opinion; to stimulate people to perform works of charity for one another and for others with a spirit of openness which will make Christian families into a true source of light and a wholesome leaven for other families (no.72).

The Church of his time helped a great deal George’s family in forming him a conscience that was alert to Christian values which guided his future decisions. The occasion presented itself around the year 303 when George, after moving to Palestine, enrolled himself within the army of the emperor Diocletian. The Church historian Eusebius gives us a clear picture of what had been happening to Christians in those days.

It was the nineteenth year of Diocletian’s reign [AD 303] and the month Dystrus, called March by the Romans, and the festival of the Saviour’s Passion was approaching, when an imperial decree was published everywhere, ordering the churches to be razed to the ground and the Scriptures destroyed by fire, and giving notice that those in places of honour would lose their places, and domestic staff, if they continued to profess Christianity, would be deprived of their liberty. Such was the first edict against us. Soon afterwards other decrees arrived in rapid succession, ordering that the presidents of the churches in every place should all be first committed to prison and then coerced by every possible means into offering sacrifice (Eusebius, History of the Church, VIII.2).

In simple words, George was coerced to either obey the emperor’s edict and recognize Diocletian as his god and adhere to the Roman pagan traditional practices – or face execution. The strong Christian principles George received from his childhood told him to shun public opinion, which kept tempting him to climb rapidly the ladder of worldly success and, instead, have the courage to reject all worldly titles, carriers and money to fully embrace the Cross of Christ.

It is as if George stood his ground by faithfully interiorising Christ’s words: For what does it profit a man, to gain the whole world and forfeit his life? (Mark 8:36). There are other two biblical texts that may have aided George to keep being adamant in his resolve to follow Jesus. The first one is, again, from Jesus himself in his discourse to the multitude, which says: If any man would come after me, let him deny himself and take up his cross and follow me. For whoever would save his life will lose it; and whoever loses his life for my sake and the gospel’s will save it (Mark 8:34-35); and the second one is taken from St Paul’s letter to the Philippians: But whatever gain I had, I counted as loss for the sake of Christ. Indeed I count everything as loss because of the surpassing worth of knowing Christ Jesus my Lord. For his sake I have suffered the loss of all things, and count them as refuse, in order that I may gain Christ and be found in him, not having a righteousness of my own, based on law, but that which is through faith in Christ, the righteousness from God that depends on faith; that I may know him and the power of his resurrection, and may share his sufferings, becoming like him in his death, that if possible I may attain the resurrection from the dead. (Phil 3:7-11).

His life story tells us that George, boldly and fearlessly, with his gaze fixed on Jesus, gave all his belongings to the poor and, in front of the emperor Diocletian himself, tore the emperor’s document in pieces and openly and solidly professed his faith in Christ. Due to such a decisively heroic act of faith he underwent the most terrible and unimaginable torture. Finally, he was beheaded as a Roman soldier would be.

The Passio Giorgii account gives us a very beautiful prayer which St George prayed before he was chopped into ten pieces.

I am mindful of your commandments, Lord Jesus Christ, whose kingdom lasts to eternity and for an age of ages. The crown of the praising and suffering martyrs is both [their] joy and strength in you, holy Lord. Before you were making heaven and earth, you yourself are, whose spirit was borne upon the waters, and you were resting, you whom no man knew, nor was able to see your perpetual wisdom; Lord, you who established the earth and raised the vault of heaven and filled up the clouds, and you rain on the just and on the unjust, Lord, who established the earth and the mountains and everything through your power, and the hills and the fields, you who commanded the gathering of the winds, and those who did not have faith in you, you handed over into the deepest prison, O Lord my God, who in later times sent to us your only son, the Lord Jesus Christ, who enclosed his majesty within the chamber of a virgin’s womb, whom no man can understand, the only begotten son of God, Lord Jesus Christ, who walked on his feet across the waters of the sea, and the foot did not sink into the water, but his footsteps appeared on the sea as if on the most unyielding pavement. Who rules over the wind and the sea, and all things are subject to you. Who with five loaves fed five thousand men; and now, hear me O Lord, so that you might hasten and deliver me from the troubles which have surrounded me, because my soul relies on you and in the living God; to you be glory forever. Amen. (no.8).

This great prayer reminds us that, when confronted with life’s challenges, problems, sufferings and injustices, we, like St George, are to subscribe to this wise counsel: Don’t tell God you have a big problem but tell your problem you have a big God! This faithful servant of God, who shortly after his death a basilica was erected over the place of his burial in Lydda (modern-day Lod, in Israel), helps us understand that with Christ all battles are won, and all dragons are killed. In fact, according to the crusaders’ idea which portrayed St George the martyr as the holy warrior who killed the dragon as a symbol for the defeat of Islam, it shows us that we too can prevail against evil that attacks us.

Since he spent his life looking towards heaven, St George could easily say with St Paul: I have fought the good fight, I have finished the race, I have kept the faith. Henceforth there is laid up for me the crown of righteousness, which the Lord, the righteous judge, will award to me on that Day, and not only to me but also to all who have loved his appearing (2 Tim 4:7-8).

Within the same perspective St George lived to the full what Jesus suggests to us in the Diary of St Faustina, when he says: Always fight with the deep conviction that I am with you. Do not be guided by feeling, because it is not always under your control; but all merit lies in the will… I will not delude you with prospects of peace and consolations; on the contrary, prepare for great battles. Know that you are now on a great stage where all heaven and earth are watching you. Fight like a knight, so that I can reward you. Do not be unduly fearful, because you are not alone (Diary, no.1760).

While honouring his relics which are still visible today, with deep faith and trust let us make our own the beautiful concluding prayer of the Akathist Hymn which the Eastern Church dedicates to St George, the Great Martyr and Trophy-bearer:

Great Martyr George, we hasten to thee for triumph over every torment and distress and over all pride and passion, that we may glorify Jesus Christ as zealous conquerors of this world and heirs of the Heavenly Kingdom. We acknowledge our unworthiness of such holy victory but, in praise of the courage, hope and trust which thou hast demonstrated throughout thy life and into thy martyrdom, we lovingly beseech thine aid in battle against sin. Pray for us, Saint George, that we may be granted the grace to confess the Faith before others and to fulfill the Commandments under all circumstances and among all people. Let us witness of Christ the Lord that everyone might see His radiant light and believe in His holy teachings. Amen

St George, a faithful servant of God and invincible martyr, pray for us!