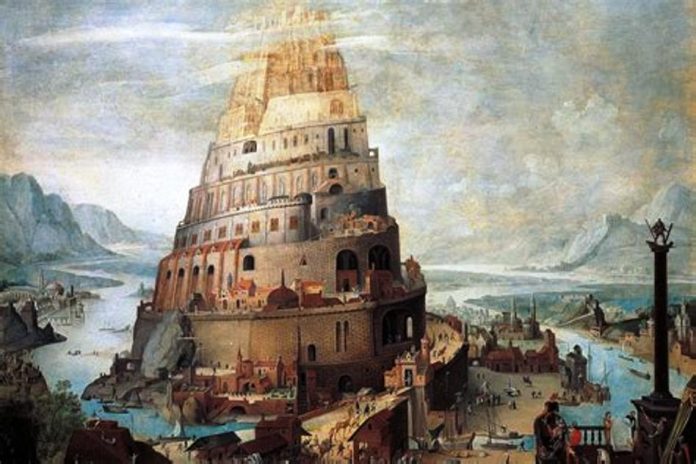 For all shall come to nothing that proceeds not from God.

In the beginning, the Lord God instructed Man to go forth and multiply. And He meant it! Going forth and increasing was God’s primary natural law – the law of life itself begetting life.

God also said that He made man and woman and when they coupled, the two became one and children were begotten, forming a family, all in fulfilment of His natural law.

But Man sinned and departed from the Garden of Eden and went into the wider world where, according to the Old Testament, he begat many, many children, yet continued to sin until such time as he was taken into bondage in Egypt. And from there he was freed by the prophet Moses, who then handed down God’s Ten Commandments which specified how Man must behave to live in peace and prosper. And what happens, according to Leviticus, when he doesn’t.

Today, God’s natural moral law remains fully in effect. Today, any deviance from it still brings confusion, misery, disease and death. And today, any and all transgressions against it bring about their own correction and their own punishment. As it was with the Tower of Babel, where God confounded a presumptuous attempt to build a tower into heaven by confusing the language of its builders.

“I am come that they may have life, and may have it more abundantly,” said Jesus.

Unfortunately, many fail to recognize that this deceptively simple statement is a statement of fact, a fact so absolute it underscores all of history, which, in turn, confirms it again and again. This statement of fact even permeates all of literature wherein tragedy is invariably a tale of characters violating the natural law and tales of heroism are about the triumph of right over wrong, virtue over vice, good over evil.

Which is why – during this summer of clerical shame that has depressed so many Catholics and shaken the Catholic faith of so many more – it is useful to point out that even today’s barrage of scandals confirms the absolute truth of scriptural teaching, of traditional Church teaching and of the absolute immutability of God’s natural moral law which is in effect in all places and at all times. Without exception. Regardless of what media commentators – or even relatives, friends and neighbours – might say.

Isn’t it ironic too that the waves of scandal now washing over Holy Mother Church are occurring on the fiftieth anniversary of Humanae Vitae, Pope Paul VI’s much reviled encyclical in which, speaking as St.Peter spoke, he supported the unbroken teaching of the Church about the intrinsic evil of contraception. Which is contrary to the natural law because it separates the marital act from its divinely ordained function, which is to be open to the transmission of human life.

Moreover, to disobey God’s natural moral law by intentionally blocking the possibility of conception – seemingly such a little thing – is to pervert the sacrament of marriage itself by thwarting its natural function and rendering the act itself unfit for its natural purpose. Which in turn, though unapparent at first, unleashes incalculable and often imperceptible misery and destruction on the family. It also opens the door wide for other opportunistic disorders such as homosexuality and all its related confusions. Just as embarking down a wrong road may seem harmless at first but eventually leads to ever darker destinations never suspected.

So here we are. Fifty years on, living in a contemporary culture daily rendering itself ever more hideous, ever more contentious and ever more dysfunctional by dedicating itself to breaking every one of the Lord God’s natural laws. And doing so with a boldness and a blatancy that, just a few years ago, might have caused a Chicago mobster to shudder in fear of the Hereafter.

How hideous? How contentious? How dysfunctional?

Consider that today Canada is home to a postmodern culture now operating far outside the natural moral law.

*A culture that has resulted in families ripped asunder by divorce, leaving children devastated, confused, uncertain and prey to a myriad of pernicious ideas and influences.

*A culture where abortion is not a sin against the mother and her unborn child but a right to be protected by law even to the point of prosecuting anyone who might attempt to change a pregnant mother’s mind; a right that, by 2016, cost the lives of 3,559,153 in Canada alone since abortion was legalized in 1969.

*A culture where huge and prohibitively expensive homes are owned by childless career couples who are rarely home.

*A culture where ‘self-fulfillment’ is the media-blessed excuse for rampant narcissism and abject selfishness, especially among younger Canadians reared in secular households.

*A culture where religious faith and its tenets have been removed from the public square.

*A culture where hedonism and decadence rule.

*A culture animated by pantheism where frightened environmentalists regularly seek to place the so-called ‘interests’ of a pagan goddess, Gaia, over those of its citizens.

* A culture resolved to normalize homosexuality – along with an ever-broadening range of sexual preferences – thereby attempting to relegate the natural law to the ashcan of history regardless of what the conscience is telling anyone who still has one. Nor does it bother to ask how anyone is supposed to reconcile their horror and disgust over allegations about clerics in Pennsylvania and the damage their sins have inflicted with the broader culture which insists that all sex – both heterosexual and homosexual – outside marriage is normal, natural and not sinful, so long as there is consent and ‘no one is hurt’? Whatever that means …

*A culture where, according to a recent poll in the UK, more than a third of youth under age 22 now identify as non-heterosexual and cites among the causes the growing acceptance of homosexuality as social media and radical sexual activism.

*A culture that insists on directly attacking the innocence of children by instructing them in sexual matters – once the right and duty of parents – in the classroom. “If the devil himself had wanted to infect mankind in the most harmful way, with the least amount of effort, inflicting the quickest yet longest-range and most permanent damage, he could not have chosen a better instrument than sexual immorality, nor a better method of introducing sexual immorality on the broadest scale than the present classroom Sex Education,” writes Randy Engel in The Final Plague.

*A culture daily reminded of its skyrocketing rates of mental illness and violence. Not to mention the similarly skyrocketing levels of anxiety and guilt still emanating from the human conscience instilled by the Lord God Himself which, in turn, cannot be quieted for long by drugs, alcohol or the latest rounds of pseudo-science promoting gender theory.

Nor does the denial of God, in whatever form it takes, obliterate Him. He does warn, however, what will happen to nations in the moral condition of, say, Canada and other nations who, imagining that their modernism places them beyond the natural law, have walked away from Him. In Leviticus 26, the Lord God specifically warns that if people indulge themselves in rank immorality, terror will reign over them as He breaks the pride of their power.

“I am the LORD your God … But if you will not hear me, nor do all my commandments, If you despise my laws, and contemn my judgments so as not to do those things which are appointed by me, and to make void my covenant, I also will do these things to you: I will quickly visit you with poverty, and burning heat, which shall waste your eyes, and consume your lives. You shall sow your seed in vain, which shall be devoured by your enemies. I will set my face against you, and you shall fall down before your enemies, and shall be made subject to them that hate you, you shall flee when no man pursueth you.”

Would readers agree that Canada – having lost its faith, its obedience, its purpose and its power – now finds itself in precisely this situation? Seeking to cajole its enemies into loving it?

Is that not what Canadians witnessed on the Toronto Danforth recently in the wake of a vicious attack by a gunman apparently out to kill as many as possible and leaving two dead? Am I alone in thinking that – as people lit candles and hugged each other in attempts at consolation – our culture has begun to resemble scenes from The Walking Dead? That these shattered people weren’t humbling themselves before God but huddling in unfocussed terror before their makeshift shrines, praying to ‘whomever’s-out-there’ to make it all stop? That “Danforth Strong, Canada Strong” – those pitifully hollow slogans in the aftermath of outrageous violence – were actually a sign of community impotence? Could it be that in Trudeau’s Canada, having given up religion, marching in one Pride Parade after another and now fighting over which vile form of sex education should be implemented, Canadians are now living in the culture of fear, as promised in Leviticus?

By turning our backs on the divinely inspired wisdom of Humanae Vitae, we’ve harmed our marriages – many of which now end in divorce and devastating our children – while those few we’ve ‘chosen’ to give birth to are being robbed of the company and the fullness of a life they’d have with many siblings. All resulting from one resolute act – the separation of pleasure via contraception from what the Lord ordained as the marital act, which is to be open to the conception of children and the natural formation of families. And by this one resolute act rendering yet another God-created good unfit for its God-created purpose while simultaneously giving rise to every sort of sexual confusion and dysphoria known to man. So far.

Nevertheless, the Truth remains as upstanding, inviolable and immutable as it ever was. The shamed clergy – who long understood their actions as sinful, so hid them – know it. So do their victims. So do millions of others whose heart and conscience are still functioning. And as confirmed by the passage in Luke 8: “For there is nothing hidden that will not be disclosed, and nothing concealed that will not be known or brought out into the open.”

Oh sure, many will continue to deny the truth of the natural moral law, maintaining and advancing the resulting mess. They will also continue to break it and continue to believe that they are somehow magically beyond punishment. Or/and if there is a God, then that God surely won’t punish THEM. Oh no. Not God. Not them!

Which reminds me of a young man who sought to confess his sins to St. Padre Pio. Yet the young man also insisted to the monk: “The thing is, Father, I simply don’t believe in Hell!”

“You will when you get there,” the saint replied.