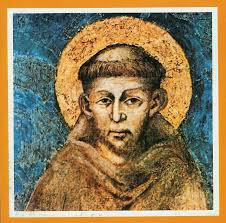 (In light of the memorial of Saint Catherine of Siena, who was a third-order Dominican, readers may enjoy these reflections from John Baldio, on the ‘secular order’ of the Franciscans, laypeople who live and work in the ‘world’, while living out the ideals of the poor man of Assisi, as best they might. Editor)

The Order was established by St. Francis of Assisi more than 800 years ago. The purpose of its members—both men and women—is to bring the Gospel to life where they live and where they work. Members look for practical ways to embrace the Gospel in their lives and try to help others to do the same.

Not Quite Monks, Not Quite Nuns

When we hear the word “Franciscan,” our thoughts usually turn to a short, round monk in a brown robe with a rope tied around his waist. This makes sense as the first Order of Franciscans, the Order of Friars Minor, are usually the most visible. They wear a brown habit and a rope cincture (cord) around their waist, tied in three knots representing their vows of poverty, chastity and obedience. These men are religious brothers and priests, members of this first order started by St. Francis.

Secular Franciscans are not monks.

The second order of Franciscans founded by St. Francis and St. Clare over 800 years ago is the Poor Clares. These women are religious sisters. They, too, wear a brown habit with a rope cincture. The also wear a white gimp (headpiece) and a black veil, and take vows of poverty, chastity and obedience.

Secular Franciscans are not nuns.

Secular Franciscans are men and women, married and single, living in secular life. We have jobs, homes, cars, hobbies and families. Francis founded our third order with the intention of having men and women who can evangelize in everyday life.

Our secular place in life puts us in unique positions to lead by example, offer spiritual counsel, and serve the people of God. We do not take vows as part of our profession to the Order. Instead promise to live the Rule of the Secular Franciscan Order, a way of life, preaching the Gospel by example in our daily lives.

I like to describe a Secular Franciscan as someone who is to a monk or a nun what a deacon is to a priest: A person with formal religious formation who has one foot in and one foot out.

The rule and life of the Secular Franciscans is this: to observe the gospel of our Lord Jesus Christ by following the example of St. Francis of Assisi who made Christ the inspiration and the center of his life with God and people. Christ, the gift of the Father’s love, is the way to him, the truth into which the Holy Spirit leads us, and the life which he has come to give abundantly. Secular Franciscans should devote themselves especially to careful reading of the gospel, going from gospel to life and life to gospel. (Rule of the Secular Franciscan Order, 2.4)

Secular Franciscans are people of deep and frequent prayer. We attend Holy Mass as often as possible, often more than just on Sundays, and pray in community and in private.

The brothers and sisters, as well as the fraternities, should adhere to the indications of the Ritual with respect to the different forms of participating in the liturgical prayer of the Church, giving priority to the celebration of the Liturgy of the Hours. (General Constitutions of the Secular Franciscan Order, 14.4)

When you pray, do not be like the hypocrites, who love to stand and pray in the synagogues and on street corners so that others may see them. Amen, I say to you, they have received their reward. But when you pray, go to your inner room, close the door, and pray to your Father in secret. And your Father who sees in secret will repay you. (Matthew 6:5-6)

While we don’t wear robes or veils, we do wear a habit. The habit of the Secular Franciscan Order is the tau cross. We wear this cross as a pendant, ring, pin or even embroidery on a shirt or jacket. It’s an outward sign of our profession to the Order and commitment to live its rule and serve God’s people. 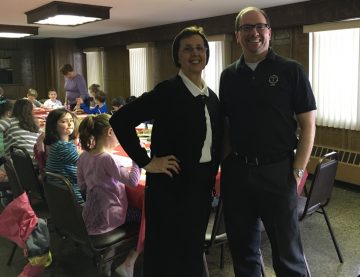 The tau is also an inward reminder of our commitment to God and His people, and our promise to live the rule of the Order.

While most Secular Franciscans wear only the tau, there can be other religious garb involved. Those who do apostolate work in the Liturgy as masters of ceremonies, altar servers or Extraordinary Ministers of Holy Communion may wear a white alb as spelled out in the Liturgical Documents and General Instructions for the Roman Missal. This applies to anyone serving in such capacity, not just Secular Franciscans.

The first and second Orders (Order of Friars Minor and Poor Clares) and many other consecrated religious communities take vows or make promises of poverty, chastity and obedience. This is both commonly known and commonly misunderstood.

There are two major misunderstandings of these vows/promises: 1. That every priest takes these vows, and 2. That Secular Franciscans take these vows. Neither do.

Poverty, chastity and obedience are a part of any religious community and vocation, but don’t always come in the form of promises and vows. For example, priests who are members of Religious Orders such as the Order of Friars Minor, the Dominicans, the Jesuits, etc. take these vows as part of their profession to the Order.

However, most of the priests we encounter in our parishes are diocesan priests. They are not affiliated with an Order and report to the Bishop of the diocese. These men make promises of chaste celibacy and obedience to the Bishop and his successors. There is no promise of poverty for these men. The get a salary and are responsible for their own expenses outside housing.

As far as the Secular Franciscan Order is concerned, remember, we are secular people with jobs, homes and families. A vow of poverty is not practical for someone who has to pay a mortgage or support a family. A permanent vow of chastity for a single person precludes the possibility of ever marrying. We live chastity according to our state of life. Our obedience is to our fraternal minister, the bishop of our diocese, and the will of God.

Jim Gafney, OFS, Minister of St. Joseph’s Fraternity of the Secular Franciscan Order in the Scranton/Wilkes-Barre, Pennsylvania, addresses poverty among seculars like this: “It’s not that we can’t have nice things,” he explains. “We simply must keep those things in their appropriate places in our lives.”

It’s about perspective. As Secular Franciscans, we do not work toward material goals, we do not place acquisition of things before growing our relationship with God. We strive to understand the role these things play in our lives as we strive to get closer to God and serve His people. We also exercise poverty of spirit, humility.

All Christians are called to humble ourselves before God and before all His people. We are servants. For Secular Franciscans, our profession to the Order does not place us above anyone. It is the result of years of work and education that prepare us to serve as the least among the most.

So, while the three knots on the Franciscan Cord, be it in the form of a rope cincture or a neck cord bearing the tau cross, stand for poverty, chastity and obedience for the first and second orders, for us they represent these virtues and more. The knots symbolize the Most Holy Trinity of the Father, Son and Holy Spirit. They also represent holiness, humility and charity, which are at the center of all we do as Secular Franciscans.

Let them individually and collectively be in the forefront in promoting justice by the testimony of their human lives and their courageous initiatives. Especially in the field of public life, they should make definite choices in harmony with their faith. Let them esteem work both as a gift and as a sharing in the creation, redemption, and service of the human community. (Rule of the Secular Franciscan Order, 2.15-16)

Secular Franciscans serve the people of God in a variety of ways. We each have our own apolstolate work in our parishes and communities that is in line with our talents and interests. We work in religious education and parish life. We work with the sick, dying, hungry and homeless. We work for the welfare of all God’s creatures, including animals.

The advantage to this type of work is that our Order is everywhere. We’re all doing something different and bringing the Franciscan charism of service to God’s people in many places.

Gaining inspiration from the example and the writings of Francis and, above all, filled with the grace of the Holy Spirit, each day the brothers and sisters faithfully live the great gift which Christ has given: the revelation of the Father. They should bear witness to this faith before all: