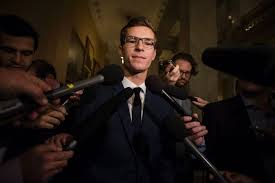 Well, I must eat some of my words about the newly-minted nineteen-year old Member of Provincial Parliament, Sam Oosterhoff, here in Ontario, and I will give credit where credit is due, in short order. First, the background: On November 28th, here in Canada, the provincial government of Ontario voted into law Bill 28, the ominously titled “All Familes are Equal Act”, which, amongst other things, removed the terms ‘mother’ and ‘father’ from government documents, making the relation of ‘parents’ (now up to four allowed) to their ‘children’ a purely contractual agreement, no longer founded on the mother-father-child relation, based on biology and natural law. Many consequences will follow upon these confused principles:  The bond between children and their parents is weakened, the notion of parenthood gutted, and the State will have far more control over your children who, after all, aren’t really ‘yours’, except under the vague clauses of the aforementioned contractual language of the law.

Of course, there are a priori reasons for this shift in policy and language, namely, you guessed it, the LGBT community (add whatever new acronyms as required), some of whom would like to have children in the midst of their various polyamorous situations, two men, two women, one man and two women, two men and one woman, transgendered, transitioning and on and on it goes.  How quaint and backward, even discriminatory and spiteful, they say, for one to think of ‘parenthood’ as a husband and wife in lawful matrimony actually having children by normal conjugal means. Of course, most of these new forms of ‘couplings’ (insofar as that term applies) cannot have children by natural means. Hence, the recourse to ever-more bizarre forms of technologically-induced human reproduction:  surrogate motherhood, renting wombs, in vitro fertilization and artificial insemination, now even the genetic mixing of three parents.  After all, in the minds of our secular intelligentsia, no one, LGBT or not, should be denied the right to parenthood.  (Well, maybe all of us heterosexual bigots, which would be ironic indeed). Hence, the need to reconfigure and reconstitute the whole notion of parenthood and childhood, to accommodate all the new and bizarre relational situations that have arisen, and may yet arise:  ‘Mother’ and ‘father’ are no longer just passé, but downright discriminatory. After all, as the law now states, are not all families equal, whether they contain a father, mother, and everything in-between?

Which brings us back to the Ontario Members of Provincial Parliament, who voted this Bill into law.  Patrick Brown, the anemic, nose-to-the-wind leader of the so-called ‘Conservatives’, ordered his fellow MPP’s either to vote in favour of the bill, or absent themselves, and find something better to do that day (Oh, that you were hot or cold!).  The Liberals, already farther down the ideological spectrum, were never in doubt of their support.   The final tally was unanimously in favour, 79 to 0.  Even the so-called pro-life-and-family members did the bidding of their ‘leader’, either voting aye to this deconstructive legislative nonsense, or happened to be washing their hair.

Which brings us back to young Sam Oosterhoff.  He was not able to vote on the bill, as he was being sworn into office the day after.  There is a mystery to this, as an article today from one non-sympathetic journalist claiming that Sam’s swearing in was ‘unaccountably’ delayed, perhaps by Brown himself, I hope not by Sam, perhaps in a ploy to ensure a unanimous Conservative vote in favour.

But, nonetheless, Sam  did express public disagreement with this legislation in an interview in the Toronto Star newspaper, calling it ‘horrible’ and that he ‘definitely would not have supported it’. Kudos to him.  He was and has been vilified for this (see the article above); Sam alone stood up to his vaunted leader, Mr.Brown (can that be all that difficult?). But I will give him credit where credit is due, for none of the others MPPs, Conservative or not, did it. As Saint Thomas says, youth of body does not imply youth of soul, using as his example the many youthful martyrs in the Church, who withstood the most horrific torments for the Faith.  Sam, facing far lesser prospective torments, did demonstrate far more insight and maturity than those of his ‘colleagues’ more than twice his age, and I hope he continues this into his future voting record.

But here is the caveat: I would still maintain that true leadership requires more than just being, or even voting, ‘pro-life’, although that is a vital and necessary start. Every politician should be like Sam Oosterhoff at the most basic level of being able to recognize the idiocy and evil of laws like Bill 28.  Sam’s comments in public to that effect should not make him exceptional, and it is sad that they do.  I still hold that governing also requires prudence, experience, knowledge of the universal and the particular of morals, ethics, business, economics, a grasp of the high and the low, how the minds and affairs of men work in the main and in the exception, what makes for good economic growth, and what constitutes social justice, instantiating those conditions wherein all receive as close to their due as possible, in the complex circumstances of the given society over which you have authority.

Of course, as far as I can tell, modern politicians need almost none of these qualities, whether they have them or not.  They read reports, meet and greet, receive advice from permanent and well-sinecured bureaucrats, then vote with an aye or a nay, often in the end just braying the party line.  As Winston Churchill pointed out (following Aristotle, whom I presume he had read), democracy works for a certain size of society, wherein the leader knows, and can be influenced by, the citizens in a real, direct way.  Think of a village, or even a smaller city. Only in this way can men really be ‘led’ and authority exercised properly.

Once a society gets too big, however, democracy becomes unwieldy, even impossible, for how does one man represent thousands?  He cannot.  Most often, he sniffs the wind, and decides what policies will get him re-elected, claiming, of course, that he is following the ‘will of the people’.  He often also strives to maintain and curry the favour of the ‘leader’, so that he is first in line for the plum appointment, or assured a chance to run for re-election.

The good politicians, on the other hand, amongst whom we may hope to count Sam Oosterhoof, will vote according to their conscience, rightly and rigorously formed in the truth (an all-too-rare trait).

However, I, for one, am rather tired that we in the conservative camp are always fighting a rearguard action, begging the ‘Liberal’, more properly the secular, relativist, amoral and atheistic Leviathan, slouching ever forward like the beast in Yeats’ poem, to just please, pretty please, stop, or at least slow down a little?

Enough. Why can we not put forward just as unstoppable an intellectual and political ‘Leviathan’ in the cause of the truth? Or at least have people in office who can clearly and philosophically articulate why things like this law are wrong on a fundamental level, as Mr. Oosterhoff, in his youthful inexperience, is at least trying to do? But no. The ‘Conservatives’ are all too often home hiding, while destructive laws, too many of them now to count, are put into effect like clockwork, undermining and dismantling our society, and too few seem able or willing to do anything about it.  They have all the chutzpah, and it is about time more of us found our own corresponding, and far greater, parrhesia, that Christian courage which Saint Paul calls for so forcefully.

So I will conclude with this thought:  If all that is required of a politician is to vote the ‘right’ way (almost always futilely) on what are rather obvious life and family issues, then perhaps a nineteen year old can do it. But, like little Oliver Twist, we must ask for, no, demand, more, not just of our leaders, but of ourselves. Sam has made a very good first step; he seems keen, with his heart in the right place, and, with his subsequent public interviews defending his stance, I dare say he did his work far better and more courageously on his first day than everyone else in the House, and holds some promise for the future.

But please don’t make too much hay of that. You know what Our Lord says about the servant who only does what is his duty.  Would that more of our politicians at least began there.