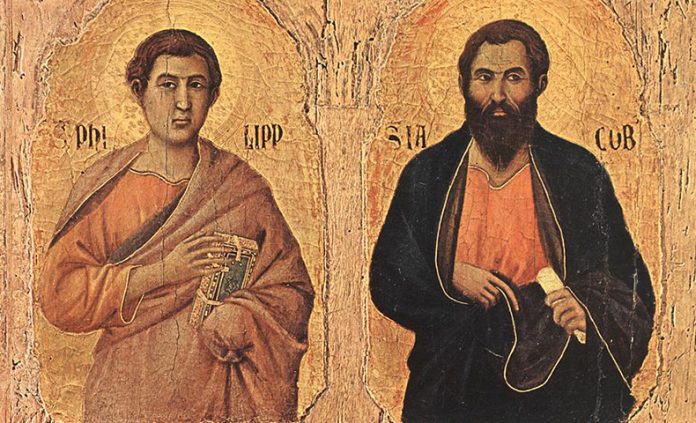 Philip and James, Apostles, have been celebrated together on this third day in May since the revision of the calendar in 1969. They were originally commemorated on May 1st, the anniversary of the church dedicated to them in Rome, but that day was adopted as Saint Joseph the Worker by Pius XII in 1955, as an antidote to the communist ‘International Workers’ Day’. Hence, here we are, on the Tres de Mayo.

Philip appears a few times in the Gospels: He points out Nathaniel, ‘the man without guile’, to Christ; it is he whom Christ asks how they will feed the 5000, ‘to test him’ and Philip replies that 300 days’ wages wouldn’t be enough. And Philip, always the literalist, later asks, towards the close of our Lord’s life, to ‘show us the Father, and we will be satisfied’, to which Christ replies, ‘Have I been with you so long, and yet you do not know me, Philip? He who has seen me has seen the Father; how can you say, `Show us the Father’? Do you not believe that I am in the Father and the Father in me?

To Philip, therefore, Christ revealed that He and the Father ‘are one’, in nature, in substance, in divinity. Recall the homoousios for which Saint Athanasius fought – but distinct in Person, as relation. The Son is the perfect image of the Father, sent into the world for our redemption, and, as He Himself reminds us just prior to this exchange with Philip, the Son is the one and unique Way to the Father, the Truth and the Life.

A non-canonical tradition has it that Philip preached with Bartholomew (the new name of Nathaniel of Saint John’s Gospel, as above) to the Greeks in Asia Minor with much success, for which they were, like Saint Peter, eventually crucified upside down in the city of Hieropolis,

James, called the ‘lesser’ or the ‘minor’, for the simple reason that he seems to have been younger than the other James, the ‘greater’, or ‘major’ (whom we celebrate on July 25th).

James the Apostle is said the Less, how well that was the elder of age than was St. James the More. He was called also the brother of our Lord, because I have resembled much well our Lord in body, in visage, and of manner. He was called James the Just for his right great holiness. He was also called James the son of Alpheus. He sang in Jerusalem the first mass that ever was there, and he was first bishop of Jerusalem

As the first to hold the see of Jerusalem, and as bishop of the ancient city, James built up the Church, before he was put to death, again as tradition has it, by certain Jews inimical to the Faith in about 62 A.D., by being thrown off the roof of the Temple. This James is the author of the powerful, hard-hitting Letter that bears his name, the one that Luther described as that ‘epistle of straw’, due to its clear statement that ‘faith without works is dead’. Indeed.

The Letter of James is well worth a re-read, especially in these times. To get us started, here are the first few lines, upon which we could meditate for some time:

Count it all joy, my brethren, when you meet various trials, for you know that the testing of your faith produces steadfastness. And let steadfastness have its full effect, that you may be perfect and complete, lacking in nothing.

If any of you lacks wisdom, let him ask God, who gives to all men generously and without reproaching, and it will be given him.

But let him ask in faith, with no doubting, for he who doubts is like a wave of the sea that is driven and tossed by the wind. For that person must not suppose that a double-minded man, unstable in all his ways, will receive anything from the Lord.

Let the lowly brother boast in his exaltation, and the rich in his humiliation, because like the flower of the grass he will pass away. For the sun rises with its scorching heat and withers the grass; its flower falls, and its beauty perishes. So will the rich man fade away in the midst of his pursuits.

Blessed is the man who endures trial, for when he has stood the test he will receive the crown of life which God has promised to those who love him.