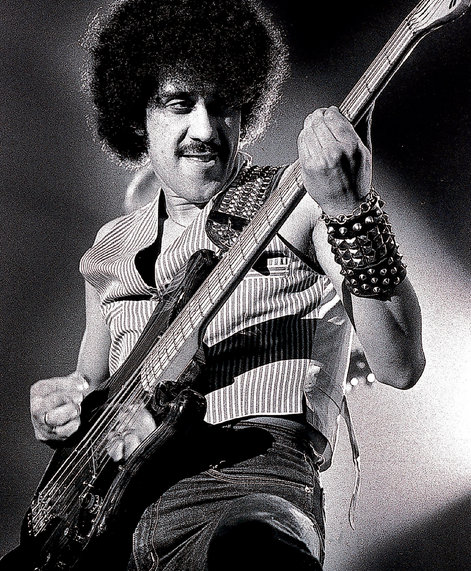 Pope Francis has declared that from December 8th, 2015 until November 20th, 2016 will be the Extraordinary Jubilee of Mercy. In the pope’s letter to Archbishop Rino Fisichella he states that he wishes “that the Jubilee be a living experience of the closeness of the Father, whose tenderness is almost tangible, so that the faith of every believer may be strengthened and thus testimony to it be ever more effective.”

The thirtieth anniversary of Phil Lynott’s death gives us the opportunity to reflect on a tragic life that could have been transformed while bearing in mind this Jubilee of Mercy.  On January 4th, 1986, at the age of 36, Lynott died of heart failure and pneumonia caused by a heroin overdose and many bouts of heavy drinking.  He was the frontman, founding member, bassist and main song writer of Thin Lizzy, a prolific rock band from Ireland that gained prominence throughout the 1970s and 1980s. Although they released many songs and memorable albums, they were best known for their mega hit of 1976 The Boys Are Back in Town.

All too often the lives of rock ‘n roll icons like Lynott end with tremendous sorrow.  Recent examples include Scott Weiland’s (former frontman of Stone Temple Pilots) death in December and the heart breaking death of Tony Sly, the talented frontman of the punk rock band No Use for a Name, in the summer of 2012. And on and on, as if, sadistically, programmed into the genetics of these individuals and the fabric of the universe they inhabit. These ostensibly tortured souls succumb to inescapable proclivities combined with a seemingly endless supply of deadly substances.  So, the scientific materialist narrative goes, right? Christian truth, however, points in a different direction where grace and true freedom can break such individuals free from lives bent on destruction.

Although self-inflicted because of an indulgence with dangerous excesses, such a pathway to tragedy, unless escaped, nonetheless, leaves family, friends and fans in a bleak enveloping void.  Not surprisingly, even somewhat poignantly prophetic, Lynott modeled himself after dead rock stars such as Elvis Presley, Jimi Hendrix and Janis Joplin who had succumbed to similar self-fulfilled finalities. The eerie cry for help in his song “Got to give it up”, attests to the realization of the severity of his addictions.  Unfortunately, he did not fully commit himself to finding a way out.  Lynott knew the consequences of his actions and the inevitability of his impending death, at a relatively young age, caused by a successive chain of poor decisions.  Oddly, it was as though he embraced it through his morbid fascination with the tragic endings of others.  It reminds me of the great singer, Jeff Buckley (who did not have heavy addictions himself) who had an untimely death akin to his own father, Tim Buckley. There is a proleptic feel to the words of these men which can be re-interpreted in such ways after their deaths.

Without a doubt, Lynott was a talented musician and a brilliant song writer.  His brokenness inspired him to write many great musical compositions.  He possessed a tremendous knack for capturing one’s very own sentiments and sorrows in wonderful prose.  Three songs stand out the most.  “Running Back” speaks of a dissolved relationship with playfully sarcastic humour: “when they say it’s over, it’s not all over, there’s still the pain.” Some of the songs Lynott had written actually had a positive and optimistic feel to them.  “Do Anything You Want To” captures this positivity:

“People that despise you will analyse then criticise you. They’ll scandalise and tell lies until they realize. You are someone they should have apologised to. Don’t let these people compromise you. Be wise too…Hey you you’re not their puppet on a string. You can do everything. It’s true if you really want to. You can do anything you want.”

Finally, Southbound is a song about new beginnings that possesses an infectiously melodic guitar riff coupled with a nostalgic evocative quality.  It brings back many memories. Some old and some more recent, including images of driving my car while playing it with the windows down on a tranquil summer evening as my daughter sings along.

Despite these magnificent song writing talents, the death of rock icons such as Lynott serve as one of the many stark reminders of the perils of our fallen world.  The universe and everything in it, is not the way that was originally intended by God.  The deep imbued remnants of our original selfishness inherited by the fallen creative order and all living things in it, leaves us in a devastating despair, if solely left to our own devices.  Lynott even in his pitiful state realized there was no escape outside of Christ.  In his song “The Holy War”, he recognizes the wages of sin through a cosmic battle between God and the devil where we are all active participants.

Shortly before his death he repented for his selfish life. His mother, at his deathbed, for the first time, saw the hidden scars of addiction on the soles of his feet. It is my hope that this repentance was a true one and that Lynott was saved by the only One who can save us from ourselves. Indeed, God’s mercy is always within our grasp, if we truly repent.

Ultimately, there is a proactive message that can be taken from Lynott’s death thirty years ago. Let us not ignore the signs of despair we see in others around us. It is Christ-like to extend a hand to help one who is struggling through life with problems of addiction. Of course, people have to have the desire to help themselves in order for us to make any meaningful impact on them. Nevertheless, we can reach out in subtle ways through showing love and compassion, as Jesus did with sinners of all stripes.  Jesus boldly declares in Luke 5:32 “I have not come to call the righteous, but sinners to repentance.” Jesus came for all since as Romans 3:23 declares “for all have sinned and fall short of the glory of God.”  The point not to be missed is that Christ came for the very sinners who recognized their need of His salvific gift. Lynott may have only truly recognized this in the face of death.  Sometimes it is in this despair we have the propensity towards kenosis: the act of self-emptying and becoming one with Christ. This is what makes Pope Francis’ declaration all the more significant and pressing given the state of lost and lonely souls that drown in despair: “I wish that the Jubilee Indulgence may reach each one as a genuine experience of God’s mercy, which comes to meet each person in the Face of the Father who welcomes and forgives, forgetting completely the sin committed.” Let us pray that every single one of us becomes aligned to God’s will.