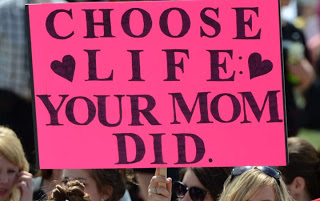 As might have been expected, Nancy Pelosi, in response to her Archbishop’s forbidding her from Communion until she repent, remains defiant in her support for legalized abortion. She has gone on the offensive, but in a sort of passive-aggressive way, appearing in a soft pink dress in a recent interview, and demurely wondering why the bishop is picking on her. Using Matthew’s parable of the sheep and the goats, she asks, what of all those Catholics who support the death penalty, or who have not ‘fed the poor and clothed the naked’, as she has done?  Further, who are we to foist our Catholic beliefs on others, and who is the Archbishop to foist his own views on her? How dare we use the full power of the state to force a woman to continue a pregnancy she does not want!

Where does one begin with reasoning so confused and obtuse? (Whether deliberately so is not my place to judge). For now, we will simply offer some thoughts on the relation between morality and law.

One might agree that, for matters of lesser import, we must tolerate a certain level of evil in society. I’m against tattoos, adultery and blasphemous speech, but to make these illegal would be, shall we say, difficult.

But there are other things that, as a society, we must ‘foist’ on others, and foremost amongst these is the forbidding of murder, especially of the innocent and defenceless.

Saint Thomas asks whether all vices should be suppressed by human law. I’m always a bit surprised when I pose this question to students, for a number of them reply, of course! A moment’s reflection, and they soon realize that such cannot be the case, for to proscribe all moral evil would be practically impossible (what of impure thoughts?). Even to try would give the state far too much power, and lead to an intolerably repressive regime, along with a disdain, if not hatred, for all law and authority – I need not press the point for most readers. Open rebellion and revolution would not be far behind. (Odd that we seem to be heading down that road with new ‘crimes’ of thought and speech, even as our society turns a blind eye, or offers full support, to outright grave evil).

Thomas says that the state must only forbid and prosecute those vices that are ‘to the grave harm of others, without the prohibition of which the human society could not be maintained. Thus human society prohibits murder, theft and such like.’

Until recently in history, we have agreed more or less on what should be prohibited, based on our shared Judeo-Christian revelation, as interpreted and applied by human reason. Without some sort of objective basis for law, we are left free-floating in moral anarchy, at the whim either of a totalitarian regime, or of a majority vote, one that is easily swayed by propaganda or coercion. As Pope John Paul II warned, a democracy without values easily turns into an open or thinly disguised totalitarianism (Centesimus Annus, 45 – and here’s lookin’ at you, Canada).

We have lost most of those values, along with our firmly held conviction, as persons and as a society, that some things must just never be done – namely, intrinsic evils – regardless of consequences. Once we have got to the point where death is seen as an easy and quick solution to a problem, we have crossed a Rubicon, and getting back to the other side will prove rather difficult. Already, there are calls for the right to ‘put down’ unwanted infants, even toddlers, a macabre perinatal and post-natal abortion.

Even the Mississippi ‘heartbeat law’, at the forefront of the upcoming Supreme Court decision, as good as it is, is problematical, for it still allows the killing of the unborn before 15 weeks. And what of all the chemical abortions, caused by the various ‘morning-after pills’, or even by the contraceptive pill itself, which often acts as a contragestative, effectively killing a baby a few days old?

It is difficult, perhaps impossible, to force a mother to bring to term or to care for an infant she does not want, or for which she feels a deep antipathy, as in, a child conceived in rape. Aborting the child is never the answer, and, at the very least, the law must not aid and abet such. ‘Safe, legal and rare’ was always a morally corrupt compromise, and has proved a legal fiction.

These are complex and fraught questions, but much of life is about doing hard things we would rather not, and our customs and laws have supported such. Staying in an ‘unhappy’ marriage for the sake of the children; foregoing the soul-mate you meet ten years into that marriage; and caring for children even in the most difficult of circumstances.

Abortion is far more a cultural and moral problem than a legal and political one. The deeper question, behind the law, is why mothers want to have their babies killed, something so contrary to nature as to boggle the imagination?

That answer is complex. Pope John Paul II, in his encyclical on life, Evangelium Vitae, offers three reasons abortion has become so widespread:

Hence, if we want to end abortion, we have to redeem the culture, a long and arduous task, but well worth the effort. And by ‘culture’, we mean a full, vibrant, traditional Catholicism, with all the richness and depth of the Church’s moral and spiritual tradition.

That all said, we must also use the law to limit what grave moral evils we might, including the killing of the unborn. Legislators have an obligation to ensure such, one which falls more heavily on the conscience of those Catholics given the fullness of truth. Human law ends with this life, but not so the eternal and divine law, on which we will all be judged. Nancy Pelosi may avoid the archbishop’s injunction, but God’s decrees are ineluctable, and she will discover that the divine exegesis on Matthew is quite different from her own. What you did not do for the least of my brethren…

Today’s feast of the Visitation, as John Grondelski points out this morning over at Crisis, shows the personhood of the unborn child, as Saint John the Baptist, at six months in utero ‘leapt for joy’ at recognizing His Lord, Who was even younger, in the womb of His own mother.

If the murder of the unborn is not ‘clearly to the harm of others’, I’m not sure what is, and if we allow the unbridled holocaust to continue, our society most certainly cannot be maintained.